10 Seconds of courage: Standing- up, literally 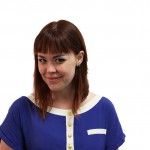 Forget 10 dinky seconds of courage. This week’s task had me sweating all day. I practiced different jokes enough times that I forgot why they were supposed to be funny, tried out different inflections, gestures, pauses, an accent or two. After telling people about this for two weeks in a row, I was feeling the pressure. I couldn’t disappoint all three of my readers. And I love each one of you so. Then the delusional part of my brain kicked in, imagining that a comic-agent would come by, see my act and immediately offer me a lot of money. Not a job contract, mind you, just canvas bags bursting with cash. It’s a fantasy, people. Logic has no place in it.

Stand-up is a sincerely scary thing, granting so much power to strangers’ laughter. It’s especially daunting if you’re an audience member like I am. I mock. Therefore, knowing that people like me exist and would be watching (and probably smirking) made me more intimidated.

We got to the club early and saw a group of waiting performers lounging as casually as you can against a wire fence. They turned dramatically, as one, to watch my friend and I approach. I definitely felt sized up. It’s weird too, this idea of performing for an audience of mostly performers. As we all waited, we were entertained with some of the signature strange that is Santa Monica, including a young man dressed up as Peter Pan, making balloon animals — in an alley.

The club was set up like most of the comedy clubs from the 90s: brick wall background, a lone mic and a single wooden stool. I was nervous; my mouth was so dry I bought both a soda and bottle of water from the bartender and downed them both before my turn. Our names were drawn randomly and I prayed that I would go after someone awful so expectations would be low enough that even mediocrity would be celebrated. And the man before me was painful to watch, as he was racist. Prayer answered.

“And next is the featured performer, Diana Losen!” No escape now. At the start, I mentioned that it was my first ever stand-up attempt and received a beautifully supportive round of applause. People really will root for you when you stick yourself out there. I went through my set, with some punch-lines getting more laughter than I was expecting, some less. But I got to feel the glow of the spotlight, make goofy gestures and succeeded in simultaneously hitting on an entire group of people at once. (To set up a joke, I told the audience they were attractive.) So I’m officially a stud now. Feels pretty good. Afterward, I received compliments from my friends, who made up the obligatory laughter row, and from one of my favorite performers. Yay. Night well spent.

Pepperdiners: Tell me of your own 10 seconds of courage and I may feature you in my next column! If you must prank e-mail me, at least have the decency to be creative. I can’t abide poorly devised goofs.

Well, there’s a fat baby statue on campus now, so there’s that. I will be the first to admit that when I saw an obscure...
Copyright 2013 Jupiter Premium Magazine Theme
Back to top