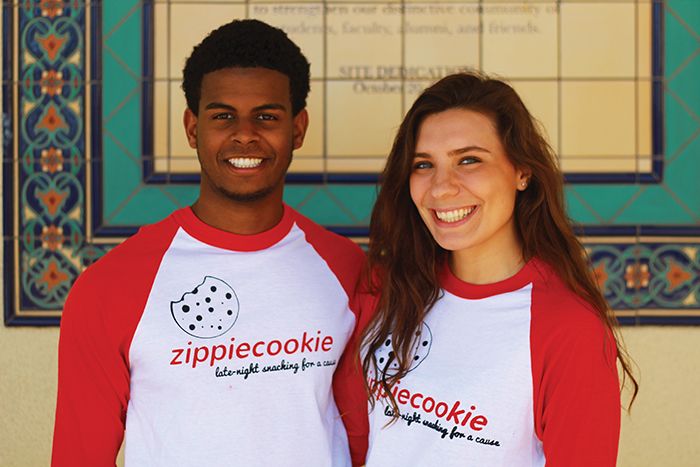 ZippieCookie kick-started its launch night Thursday, Feb. 19, delivering almost 500 cookies and 50 brownies to students on campus, according to ZippieCookie co-founder and Sophomore Noah Wossen. “A late night snacking for a cause” is ZippieCookie’s slogan. It is a late-night delivery service on campus where students can go online and order cookies and brownies and have them delivered, according to Rusin.

“Our goal is to make an effort towards aiding the issues of world hunger, local hunger and food deprivation in the area,” Wossen said.

Wossen and Briana Rusin are sophomores and at Pepperdine University and are the co-founders of ZippieCookie. Wossen is a finance major while Rusin is a contract major who is focusing on public health. Her contract major is a combination of political science, sociology and biology.

ZippieCookie’s goal is not to just deliver late night snacks to students on campus, but they are also working for a larger cause.

“We are partnering with organizations in the greater Los Angeles County area to support hunger and the issues of food desert communities at home,” Rusin said. “But also we both have a lot of interest in the global world hunger as well.”

ZippieCookie aims to aid in this cause by donating 40 percent of its profits to charities that also share a similar cause, Wossen said. Stop Hunger Now is one organization that ZippieCookie is donating to, according to Rusin.

“Our aim is not for profit in a sense that we are not doing this to make money, but we just want to cover our cost and be able to operate and do good work,” Rusin said. “So the main thing here is the service.”

Those who are a part of ZippieCookie work for pure volunteerism. Students can even go to the PVC and get service hours for volunteering for ZippieCookie.

Currently, ZippieCookie delivers to only a select amount of places on campus.

“We deliver to Lovernich, Towers, Greek Row, Lower/Upper Dorm Road and Payson Library,” Wossen said. At the moment there is not enough “man-power” to deliver to Drescher or George Page.

ZippieCookie’s current hours of operation are Monday, Wednesday and Thursday nights from 10 p.m. to 1 a.m. Students can order online at their website, zippiecookie.com, on the respective days.

There is also a care package option that is available, but it was not available during the initial launch, Rusin said.

ZippieCookie plans to expand and grow the menu options in the future.

Rusin said they also want to do seasonal things for Christmas time or Valentine’s Day.

All of the recipes are original. “We wrote all the recipes ourselves, and it’s close to my heart that what we are selling, people are actually liking,” Rusin said. “We’ve made some bad recipes, but it was a growing experience.”

The idea started when Rusin and Wossen were talking about what they can do on campus.

“This is something that we our passionate about,” Rusin said. “My family is from Morocco and Noah’s is from Ethiopia, so the issue of world hunger is very close to both of us.”

Wossen said that it cost between $600 and $1000 to start everything. The starting funds were mainly split between the both of them.

“There’s a lot of 50/50 splitting that happens between the two of us,” Rusin said.

The money went into supply for packaging, bicycles and T-shirts to name a few, according to Wossen.

The idea started formulating toward the end of their second semester of their freshman year. During their time spent taking two summer session classes, they went through a lot of trial and error with baking, Wossen said.

“Even second semester we were talking to a lot of staff and faculty on campus, professors, HRL, to try and make sure what we are doing is OK and that we could do it,” Wossen said. “So it was a really long process and it continued into second year.”

During the second semester they had to obtain T-shirts, equipment, bicycles and ingredients. But the hardest thing to get was people, Wossen said.

The nutrition department is helping out ZippieCookie with their operationsby letting them use their kitchen.

“They have been really gracious for letting us use some of their equipment,” Rusin said.

The nutrition department also helps with the ingredients.

“The nutrition department is helping out ZippieCookie with operations by helping them pick out the best quality ingredients at the best price, Rusin said.”

Rusin and Wossen said they appreciate their wisdom and support.

ZippieCookie also has plans for its future. Wossen said they plan to grow to other campuses in the future as well.

“We want to create our own organization and also be in different countries or in different local communities making a direct impact rather than just donating a certain amount of money to an organization,” Wossen said. “We are as big as we would like to be, but I think in the future that is how we plan to grow.”

Wossen said the initial launch was a large learning curve. He said that they realized there was a high demand for cookies and they sold out within an hour and a half.

“We are realizing we need to figure out a way to specialize and make it so that we are a lot speedier,” Wossen said. “It was a great success last night, but we want to be a bit more efficient as well so that in the future people are getting their orders on time.”

ZippieCookie gave out the cookies and brownies for free on launch night.

ZippieCookie used to be called ZippyCookie, according to Wossen. It was supposed to symbolize a speedy, cool and modern name.

“The reason why we adopted [Zippie] as the actual name is because our goal is to make an effort towards aiding the issues of world and local hunger and food deprivation in the area,” Wossen said. “So we realized that Zippie would be a nice twist to our name.”

The word zippie means a person who does something for nothing.

The name is in the process of being trademarked, Rusin said.