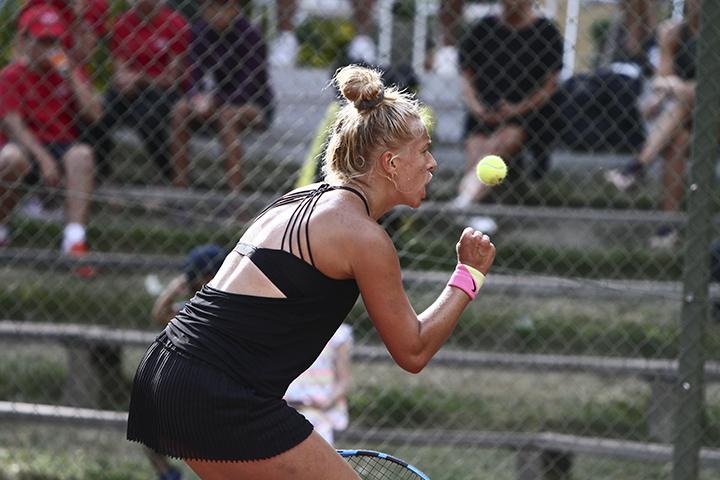 Sophomore Lisa Zaar celebrates a point during one of her matches in the Audi Danderyd Open. Zaar won the tournament against professionals in her home country of Sweden. Photo courtesy of Lisa Zaar

While Pepperdine sports are on pause for the fall, student–athletes are still competing in competitions that follow COVID-19 protocols that are not part of the NCAA.

International athletes have had an easier time playing sports this summer due to other countries having fewer cases of COVID-19.

Student–athletes in sports like tennis are able to compete unattached throughout the summer in tournaments across the country and world.

Sports such as tennis, track and field and golf are all able to compete individually in their respective sport as long as they are not affiliating themselves with Pepperdine. Athletes are not allowed to wear their Pepperdine uniform or jersey for a competition they compete unattached in.

Lisa Zaar, a sophomore on the Women’s Tennis team, won the Audi Danderyd Open Summer Tour in Sweden on Aug. 23.

“It was a discussion before if they would even have the tournament because of concerns of COVID-19,” Zaar said. “They had three different zones for spectators, and we were not allowed to shake hands. Although we didn’t need to wear masks, everyone is obviously careful when they are playing.”

The tournament was made up of professionals from around the world, and Zaar was able to have some good competition despite the circumstances.

“One of the girls who I played was really good; she was ranked [No.] 120 on the Women’s Tennis Association singles rankings,” Zaar said. “I played a good professional, so that was really fun.”

Zaar said Sweden is much different than the U.S., in terms of their progress and protocol on COVID-19. Sweden, however, had to adjust its sports schedule just like the U.S.

“In the beginning, they canceled all the pro tournaments,” Zaar said.

Zaar said that everything began to open up and practices were able to restart again after a month of closure.

While many professional sports leagues have decided to close or limit the number of fans in attendance at sporting events, Sweden has started to allow spectators in for outdoor events.

In August, Sweden announced it would begin to ease restrictions on the number of spectators at cultural and sporting events; COVID-19 cases and deaths in Sweden have declined over the past few months.

When student–athletes are competing for their university under the NCAA, they are subject to its rules of amateurism. No student–athlete is allowed to profit off their sport or their likeness while competing in the NCAA.

Zaar’s victory in the tournament allowed her to win prize money, and she was able to use that money to cover costs for her tournament like food, housing and transportation.

The NCAA’s annual limit on tournament expenses is $10,000. Whatever prize money is left over after the essential expenses are covered must be returned to the NCAA; the student–athletes cannot keep the remaining money. To remain in compliance, Zaar is required to fill out a report of all the expenses she accumulated during her tournament.

Despite Sweden being more open than the U.S., Zaar said she is planning to return to Malibu on Friday. The victory from her tournament was her last major tournament of the summer, and she will likely not compete for a while once she comes to the U.S.

“I thought about staying home and playing in a regional tournament to qualify for the national tournament in Sweden,” Zaar said. “However, I wanted to go back and practice and get better because I played a lot this summer, so it will be good to get back on the court and work on things I need to. I won’t have to stress about the safety of traveling every week.”