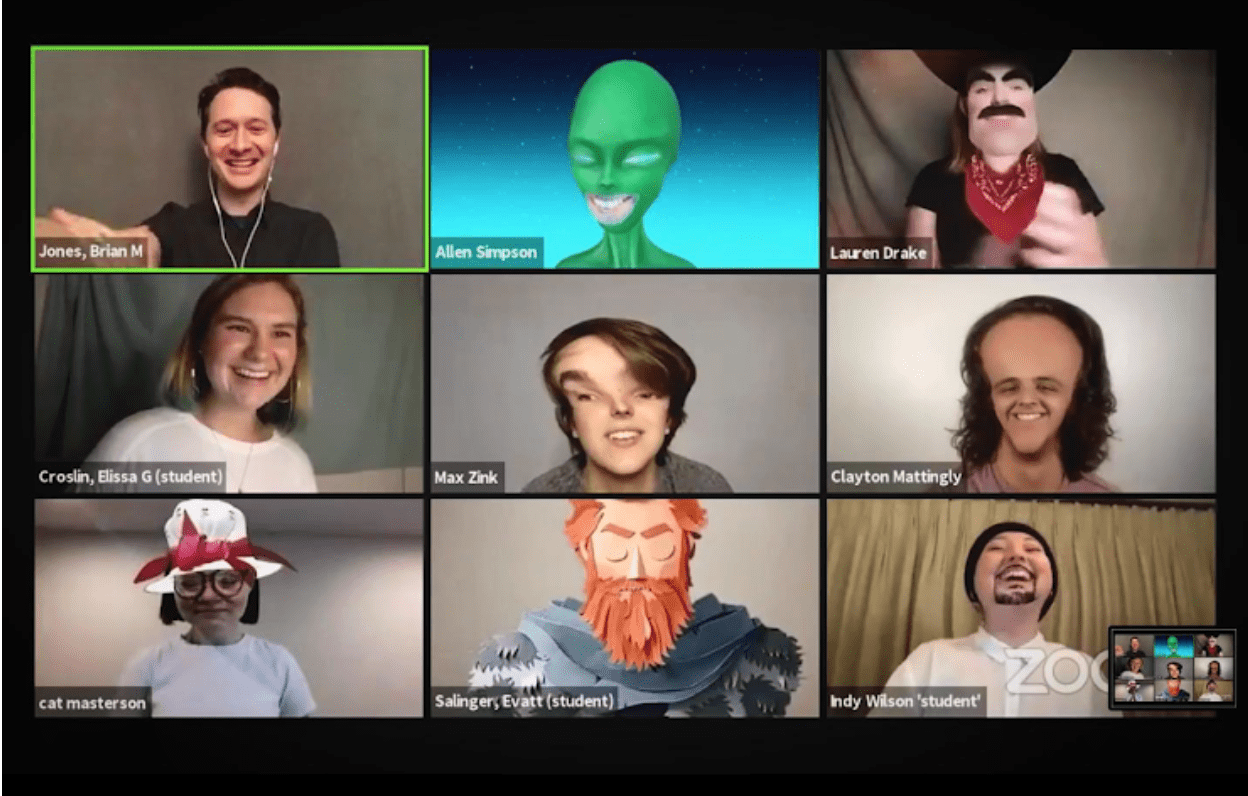 Pepperdine Improv Troupe members perform a show together via Zoom on May 7. Senior Indy Wilson said one of the limitations of using Zoom to practice improv is that it forces PIT to focus on really specialized scenes and exercises, as opposed to their more traditional, free-for-all practices on campus. Photo Courtesy of @Pepperdineimprov Instagram

COVID-19 hurt almost every industry in Los Angeles, from the film and restaurant industries to theme parks and tourism and beyond. The December 2020 closure of the Upright Citizens Brigade’s theater in Los Angeles drew attention to another industry COVID-19 hit hard: improv comedy.

As lockdown orders began going into effect for LA residents in March 2020, improv theaters and troupes had to decide if and how they would continue performing from home. The Pepperdine Improv Troupe and Improv-LA both decided to keep practicing their craft despite the pandemic, adapting to their new circumstances.

“If you can’t [adapt] for an improv class, then you’re doing improv wrong because it’s all about adapting to what you’re doing,” Improv-LA Founder Keith Saltojanes said.

Saltojanes said he founded Improv-LA in 2010 to create a space for people to learn and practice improv in a stress-free environment.

“Improv should just be having fun and playing,” Saltojanes said. “That’s really what it comes down to.”

When Improv-LA’s theater closed in March 2020, Saltojanes said his team was ready to shift to virtual instruction, as they had already been developing an online video improv class prior to the pandemic. In addition to this video class, Improv-LA began hosting live Zoom classes a few times a week and saw their reach grow with this new format.

“Now we can have one class with people from Canada, people from New York, people from LA, people from all over in the same class, which is super fun and never, ever would have happened if we didn’t have these online classes,” Saltojanes said.

Saltojanes said the new format makes some people more comfortable with branching out and trying improv for the first time.

“It seems like people who would generally be too nervous are like, ‘OK, I can open my laptop and sit here and learn and still do it,’ which has been great,” Saltojanes said.

While Improv-LA has been successful in its shift to online instruction, Saltojanes said there are still problems trying to learn improv without a live, in-person audience.

“That’s the biggest thing for learning improv: You have to do it,” Saltojanes said. “You can take classes, but not having the opportunity to actually perform makes it harder to work on those skills.”

While Improv-LA was closing its theater and beginning the transition to virtual improv in March 2020, junior Max Zink, a member of PIT, said the students of PIT, knowing they would not all be physically together again for a while, were putting together one last in-person performance and vacating campus.

“It was something that kind of solidified that, no matter what, we could come together and make something,” Zink said.

“It’s just a safe learning space where we workshop and have fun and we bring joy to ourselves and to the community,” Wilson said.

PIT is used to performing and practicing virtually now, but Wilson said they still have issues with the new format. Their audition numbers decreased drastically, from roughly 60 people in the past to only 14 this year, and their virtual shows are attended by far fewer people than their traditional shows in Elkins Auditorium.

“We were like a cult on campus,” Wilson said. “It was like, ‘Oh, there’s a PIT show!’ and now I feel like it’s ‘Oh yeah, these nerds are doing improv every week.’”

Both Wilson and sophomore PIT member Cat Masterson said they are passionate about comedy and want to continue performing post-grad at somewhere like the Groundlings improv theater, hoping to one day be actors or “Saturday Night Live” cast members. Masterson said this past year made her feel farther from these dreams than ever before.

“That’s still my dream, but it’s kind of become foggy now because everything is so uncertain,” Masterson said. “I feel like it will happen one day, it’s just now I don’t know when at all.”

Despite the challenges PIT overcame since their final in-person show in March, Zink said their love of improv kept the group together.

“It’s about supporting each other and giving each other something to hold on to and work off of, and there’s something about that relationship of two people not knowing exactly what is happening in the moment, yet still making something of it that I think has kind of enchanted me from the entire time I’ve been in improv,” Zink said.

As both PIT and Improv-LA continue to operate completely online, for now, both groups said they hope their work is still able to bring people together and make them laugh through this dark time.

“There’s just something so magical about it, and I feel so grateful to be a part of it, and I hope that just a little piece of that gets shown to anyone that gets to watch it,” Zink said.