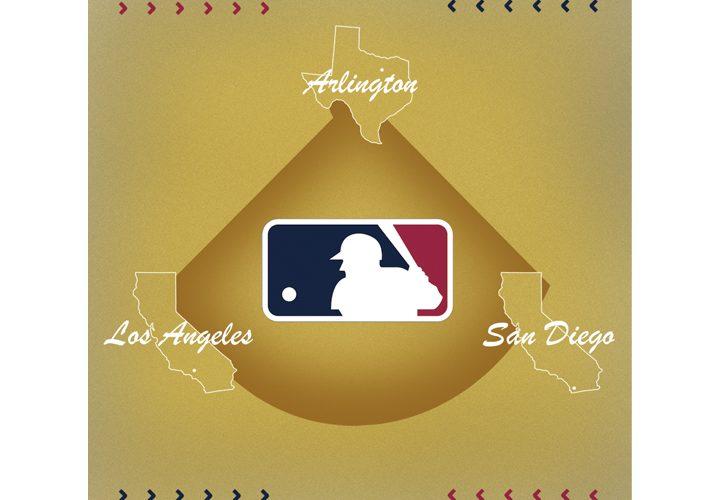 For the first time, MLB will play its playoff games in neutral sites. The locations are Arlington, Los Angeles and San Diego. Art by Inez Kim

Major League Baseball is entering the last part of the season as the Tampa Bay Rays and the Los Angeles Dodgers play in the World Series.

For the Rays, it is the first time they will play in the World Series since 2008, while the Dodgers are making their third appearance in the past four years. The Rays have never won a World Series.

The World Series is set to be played at Arlington, Texas, in the new Globe Life Field, home to the Texas Rangers. 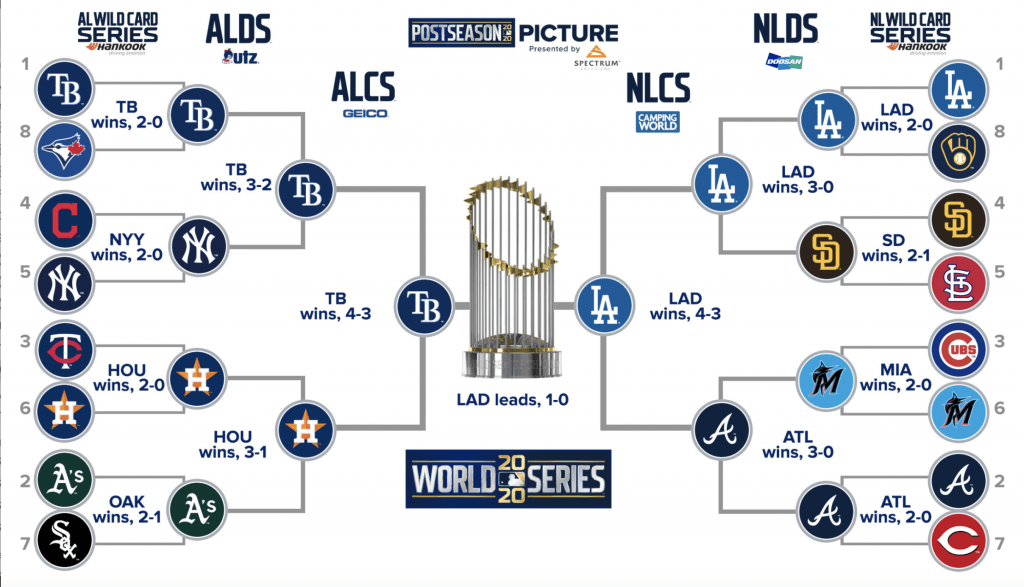 Tampa Bay and Los Angeles are the final two teams standing in the largest-ever MLB playoffs. The World Series continues with Games 3 and 4 on Friday and Saturday. Photo courtesy of MLB.com

MLB has had some difficulties in 2020 regarding COVID-19, team scandals and contract disputes.

In January, an investigation by MLB found that the Houston Astros had used technology to steal signs during the 2017 and 2018 seasons. The sign stealing resulted in Astros players having prior knowledge of the pitch being thrown to them.

Commissioner Rob Manfred suspended the Astros General Manager Jeff Luhnow and Manager A.J. Hinch for the 2020 season. Manfred did not take away the Astros 2017 World Series championship despite the findings.

In March, MLB canceled spring training due to the COVID-19 pandemic and Manfred and the MLB Players Association began discussions of how the season will be structured.

Several proposals for the season between MLB and its Players Association put the season on hold until June 23.

On May 26, MLB proposed an 82-game regular season with a sliding scale salary that goes down as salaries go up, according to an article from ESPN. The Players Association responded with a 114-game proposal with full prorated salaries for each game.

A prorated scale is when a player gets paid the amount of their salary proportionate to the number of games they play. A sliding scale salary is when wages are increased as the prices rise to maintain the power of the player even if there is inflation.

The agreement had the league play 60 games and each player received 37% of their normal salary. Players agreed to report to camp by July 1, and Opening Day was July 23. MLB decided not to play in a bubble, which the NBA and NHL had decided to do.

The bubble is a concept in which people live in one place and non-essential people are not allowed in it to preserve the health and safety of people. The MLB decided not to do it because the players were opposed to it.

Four days after MLB’s first game, the Miami Marlins experienced a COVID-19 outbreak with a total of 20 cases. Due to the outbreak, other teams such as the Phillies and the Yankees canceled their games due to both teams having played the Marlins prior.

Through an investigation, MLB found that Marlins players failed to follow COVID-19 protocols on a road trip by going to bars and congregating at hotels.

A similar incident happened later in the season with the St. Louis Cardinals. Thirteen members of the Cardinals tested positive for COVID-19 on Aug. 1.

Despite the positive tests and outbreaks among teams, Manfred announced the season would be moving forward. Manfred said there is no reason to quit and that COVID-19 is manageable.

To prevent future outbreaks, MLB and its Players Association implemented new safety protocols. Players and staff are required to wear face masks everywhere except the field, including the dugout and bullpen.

Other initiatives like social-distancing for rain delays by providing outdoor spaces were also put into effect.

With the unusual circumstances around the 2020 MLB season, new rules were made for the season.

The designated hitter has been in the American League since 1973. The DH is a player who only bats and does not play the field, according to Pro Sports Outlook.

For the first time, the National League implemented the DH, and it became universal for the 2020 season.

Another rule change is that teams could enter a 60-player pool for their roster as opposed to the usual 26 players allowed for two weeks of the season. After that, the roster needed to be trimmed down to 26.

There is also a new extra innings rule that greatly impacts strategy. The new rule states that starting in the tenth inning, each team will allow a runner on second base when they start their half of the inning.

This rule is an effort to speed up extra innings and add more excitement to the game, and baseball has struggled to attract fans who have complained about games being too long. The runner on second base will be the runner who made the last out from the inning before unless a manager uses a pinch runner. The rule is not being used in the postseason.

The last major rule change deals with ejections and suspensions. MLB enforces strict social distancing guidelines, so the league could suspend players who disobey COVID-19 standards, like fights or confronting the umpire, during games.

MLB is considering using the designated hitter in 2021, and most of the other rules will only stay for the duration of the 2020 season.