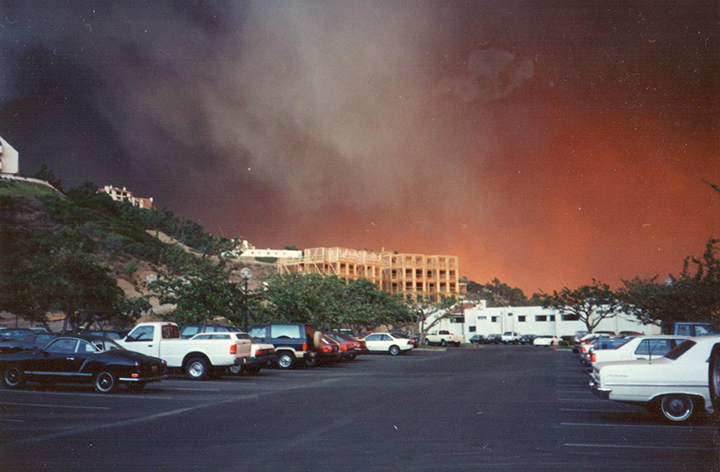 “No one will ever forget,” President Andrew K. Benton said regarding the recent tragedies the community faced.

Regarding the wildfire, Benton said Woolsey is “[a]rguably one of the worst wildfires in Malibu.”

The Woolsey Fire will forever go down in history as among the largest fires the LA County has seen in 100 years, Los Angeles County Fire Chief Daryl Osby said in a Los Angeles Times article.

While the community deals with the mind-boggling effects of Woolsey, it is important to take note of the past sets of flames Pepperdine and the surrounding area have fallen victim to. There are six significant fires that have affected the area since Pepperdine moved to Malibu in 1972, one each in 1985, 1993, 1996 and 2003 and two in 2007.

As of Nov. 21, 13 days following the fire’s start, the flames were 100 percent contained, according to CBS Los Angeles’s Twitter. KTLA 5 reported Woolsey peaked at 98,362 acres. The fire destroyed 1,130 structures, damaging 300 more in 11 neighborhoods and cities in Los Angeles and Ventura counties, according to the Cal Fire incident update report for Nov. 18.

The fire claimed three lives, two of which were in Malibu, according to KTLA 5.

While multiple wildfires have affected Pepperdine over the years, none have left a mark as distinguishable as Woolsey’s: the acreage burned, the buildings destroyed and the duration of the fire’s life is incomparable to the previous six fires.

Burning a total of around 11,300 acres of land and destroying six homes, both the Piuma and Decker Canyon fires surged the Malibu area on Oct. 14, 1985, according to The Malibu Times. They were the first major fires in 14 years, relating in significance to the 1971 fire, according to the Pepperdine Newsroom.

During this time, three major fires roared, these two in Malibu and one in Ventura County, claiming more than 20,000 acres during early stages, according to the Los Angeles Times. The New York Times reported about smaller fires that plagued the Los Angeles County and Ventura County areas during the same time.

The Piuma fire was labeled the “most dangerous” out of the three, according to the Los Angeles Times. Piuma threatened the Las Flores, Latigo and Corral Canyons. The Decker fire attacked the Pacific Coast Highway near Leo Carrillo State Beach and made its way into Ventura County.

Four helicopters and eight aircrafts aided in the flame fight, throwing water and chemical retardants upon the fiery glow, according to the Los Angeles Times.

The fires reportedly ended Oct. 17 early in the morning, three days after the fires’ beginnings.

The cause of these fires was expected arson, since the three major fires were close-by and popped up within 45 minutes of each other, Capt. Gordon Pearson, the county fire captain at the time, said in the New York Times article.

Pepperdine learned how to properly act in any bad situation from the 1985 fires, Benton said.

“I was fairly new to the university. I had never experienced a wildfire … So many of the university leaders had left campus,” Benton said.

Realizing that it was wrong to leave campus when students were left behind, Benton returned to campus to be with the students.

“We vowed to never let that happen again,” Benton said. “We learned the hard way.”

With Santa Ana winds gusting at 60 mph, the Old Topanga Fire started at Mulholland Highway, made its way through Topanga Canyon and the Santa Monica Mountains and reached PCH in a matter of hours on Nov. 2, 1993, according to The Malibu Times.

The fire destroyed approximately 16,800 acres, leaving 268 homes burned to the ground in Malibu, killing three civilians and injuring hundreds of firefighters, five injuries which occurred in Malibu, according to The Malibu Times. This fire was known at the time as “the largest deployment of firefighters in the history of California.”

The fire lasted 10 days, ending Nov. 11. From the devastation came new recovery methods, such as weekly town gatherings where the community dealt with their trauma. The Malibu Times highlighted these efforts in a specially-made section called “Operation Recovery.”

The Greater Malibu Disaster Recovery Project (Gumdrop) was also created, with help from Pepperdine Senior Vice Chancellor Louis Drobnick, according to The Malibu Times. This project is a non-profit that served to provide financial aid to those affected in the ‘93 and ’07 fires without other means of help, like insurance coverage.

A fallen power line and 50 mph Santa Ana winds instigated the 1996 Calabasas brush fire that raged from Oct. 21 to Oct. 28, according to Firehouse, a leading media source for the fire industry. A 15-year record low in humidity of 5 percent also facilitated the flames.

During this time, another serious fire was burning in Orange County.

The flames ravaged 13,000 acres in the Malibu Canyon and claimed 10 homes, according to The Malibu Times.

Firehouse reported that the flames appeared on Pepperdine grounds and the university initiated a shelter-in-place in the gymnasium.

The Pacific fire threatened PCH as the flames sparked to life near Broad Beach, according to The Malibu Times. The flames raged from Jan. 6 to Jan. 10, according to the U.S. Department of Homeland Security.

The fire singed 759 acres, damaging three homes, according to The Malibu Times. Fires in Latigo and Corral Canyons also hurt 20 acres of land. More flames roared in the Santa Monica Mountains, burning a total of 2,200 acres, according to Firehouse.

The proposed cause was malfunctioning power lines.

2007 saw two fires that affected Malibu and Pepperdine. The first, Malibu Road fire, was in January, according to the Malibu Times. Beginning at Malibu Buffs State Park and reaching Malibu Road, 20 acres burned, ruining five homes and damaging six others. The believed cause for these flames was wrongly disposed smoking materials. Fire helicopters used Pepperdine’s ponds for water, according to The Malibu Times.

The second, known as the Canyon fire, began on Oct. 21 at 4:50 a.m., and while it started as a brush fire possibly from fallen power lines, the flames began jumping rooftops, according to Firehouse.

The flames lasted until Oct. 23, according to The Malibu Times. It was the worst fire Malibu had seen since the Old Topanga Fire.

The fire ravaged 4,565 acres, destroying six homes, according to The Malibu Times. The flames affected 15 other homes. The fire department ordered evacuations and 2,100 residents followed suit.

These flames physically affected campus, blazing acres as well as plant life surrounding the Phillips Theme Tower, which marks the entrance of campus, wrote Edwin L. Biggers, chair of the Board of Regents, in his letter in the 2007 Annual Review, The Journey. Benton tried to pacify the students’ fears with his words and the school community held a time of worship.

Returning from the Woolsey Fire

As the student body repopulates campus in the coming week, Benton said he believes the community will come back “stronger and more united than ever before.”

The journey to healing will start with a “beautiful worship service” Sunday at 7 p.m., Benton said. It will help students and faculty process the recent events that afflicted the community.

As for academics, Benton said it will be the job of the faculty to get students back into the mindset of studying, but the motto of the school ever since the start of the fire has been “compassion first.”

“No one on campus is unaffected,” Benton said.

With plenty of experience with wildfires, Pepperdine and Malibu will rise tenaciously in time from the current devastation.

'Curtains' Runs for One Night Only 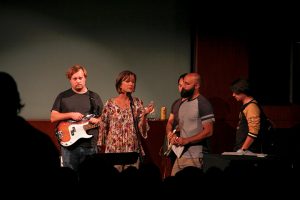 Photos by Kaelin MendezCountless professors have reached out to students following both the Borderline Bar and Grill shooting,...
Copyright 2013 Jupiter Premium Magazine Theme
Back to top