An array of artwork and photos influenced by the Woolsey Fire greet visitors as they walk into Malibu City Hall. Artwork ranging from sculptures, paintings and multimedia pieces cover the first and second floors of the building.

Inspired by other works such as Robert Kerbeck’s LA Times op-ed and upcoming book “Malibu Burning,” the Malibu community came together to express their experiences during the Woolsey Fire through the creation of an art exhibition. The Malibu Cultural Arts Commission requested local artists and other creatives to submit art pieces for the collaborative community art exhibition “Radical Beauty, Malibu Rising.”

“It was a chance for the arts commission to be a bridge between the city and the citizens of Malibu,” Veronica Brady, chair of the Malibu Arts Commission, said. “I think art is [one of the best] ways sometimes to relieve people of a trauma that is persistent.”

Brady said when the Cultural Arts Commission sought out artists for art pieces, the commission received hundreds of submissions. Because of the overwhelming response from local artists and the Malibu community, the commission decided to have two installations.

The first installation occurred in May and the second installation opened in September and will run through December. The community art exhibition is housed in Malibu City Hall and features over 70 artists.

“[‘Radical Beauty, Malibu Rising’] is an opportunity for the community to come together and reflect on the entire phenomenon of the Woolsey Fire,” said Karen Farrer, mayor of Malibu. “[The Woolsey Fire] was the largest fire in the history of Los Angeles County, and the largest one in memory for anyone who lives here in Malibu.”

Fueled by powerful gusts of winds, the Woolsey Fire spread throughout Ventura County and eventually made its way to Malibu in early November 2018. The effects of the fire were catastrophic, leaving many residents displaced and emotionally distraught.

“[The impact of the Woolsey Fire] doesn’t seem to really go away yet, and I don’t think it will for a while,” Malibu council member and Pepperdine alumnus Skylar Peak (2006) said.

In efforts to shed light on the tragedy that ensued and allow community members to express themselves through art, the Malibu Cultural Arts Commission curated the art exhibition.

“Lots of people were inspired either by what they lost or what they created from the remnants of their homes and studios,” Brady said, “People get disbursed after the fire; they get relocated, and they don’t see their neighbors; they don’t see their friends, so we felt that bringing people together in this way would be effective both artistically and emotionally.”

Currently, at City Hall, the second installing of “Radical Beauty, Malibu Rising” is on display. On the second floor of one of the main entrances, visitors can see a line of glossy photographs displayed on the wall. As visitors descend to the lower level of City Hall, they can see numerous works of art ranging from three-dimensional sculptures, poetry, paintings and other forms of artwork.

Farrer said all the artwork on display moved her, but the many photographs in particular had a great impact on her.

“I look at some of the pictures and I know those houses. They’re houses I’ve been in,” Farrer said. “It’s very personal. Malibu is a small community. It’s famous, and it seems bigger, but it’s a small town.” 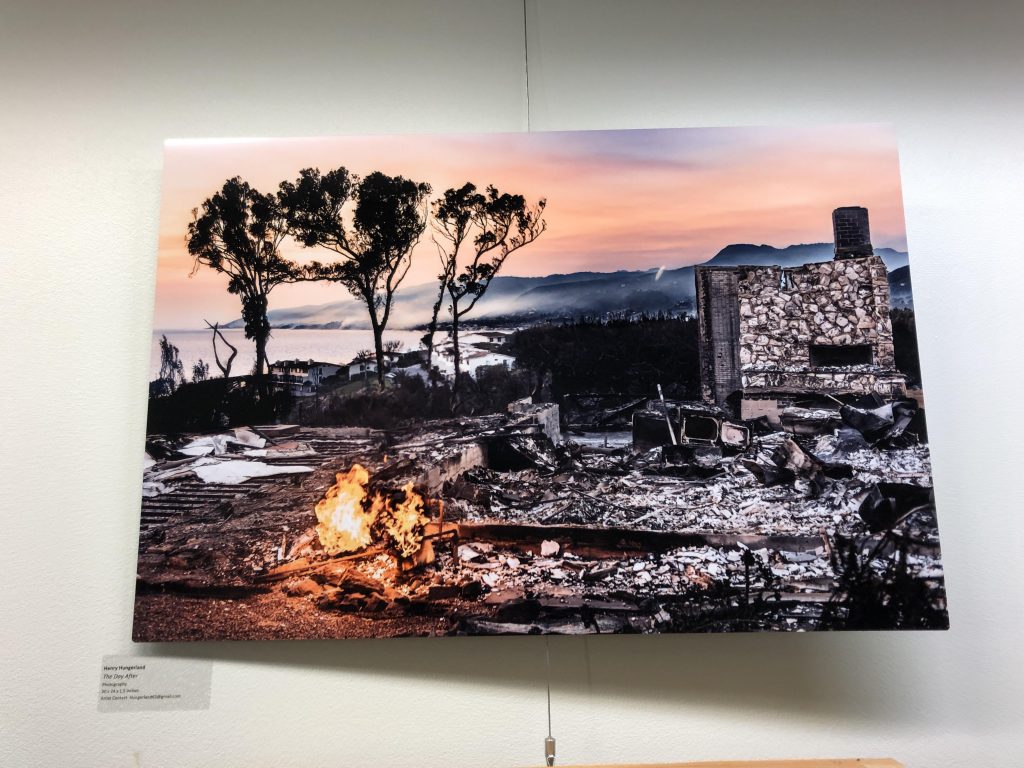 “The Day After” by Henry Hungerland. Photo by Emily Shaw.

Brady said she felt a similar attachment and appreciation for the photographs on display.

“People had to be all the things that they could be for their neighbors, providing water and food and shelter and community and relief, and I love those photos,” Brady said. “I love when you see people helping each other in those circumstances.” 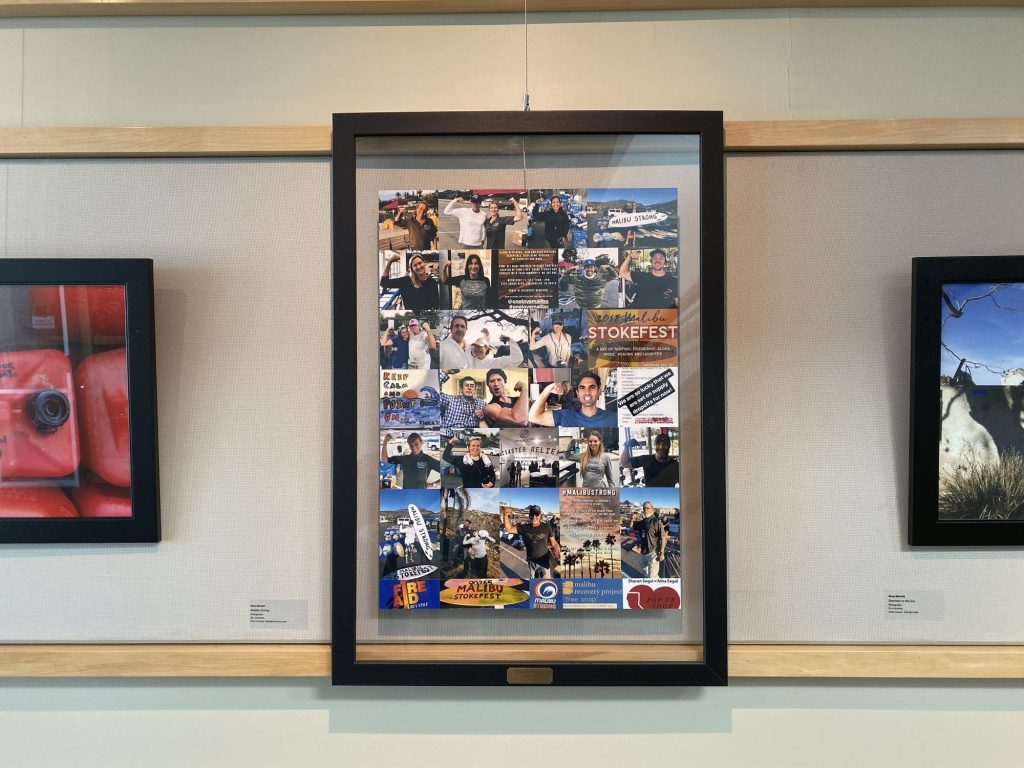 Peak said the art piece of the fireman on a ladder stood out to him in particular because he thought it powerfully expressed an experience from the Woolsey Fire through art.

The piece “Hot Shot” which includes a variety of vibrant colors using an abstract design and template, depicts a fireman climbing a ladder. With a black background, the colorful fireman stands out against the perceived darkness of the smoky fire.

He also said he thought the artifacts and pieces that included burned objects effectively show the extent of the destruction the fire left behind. 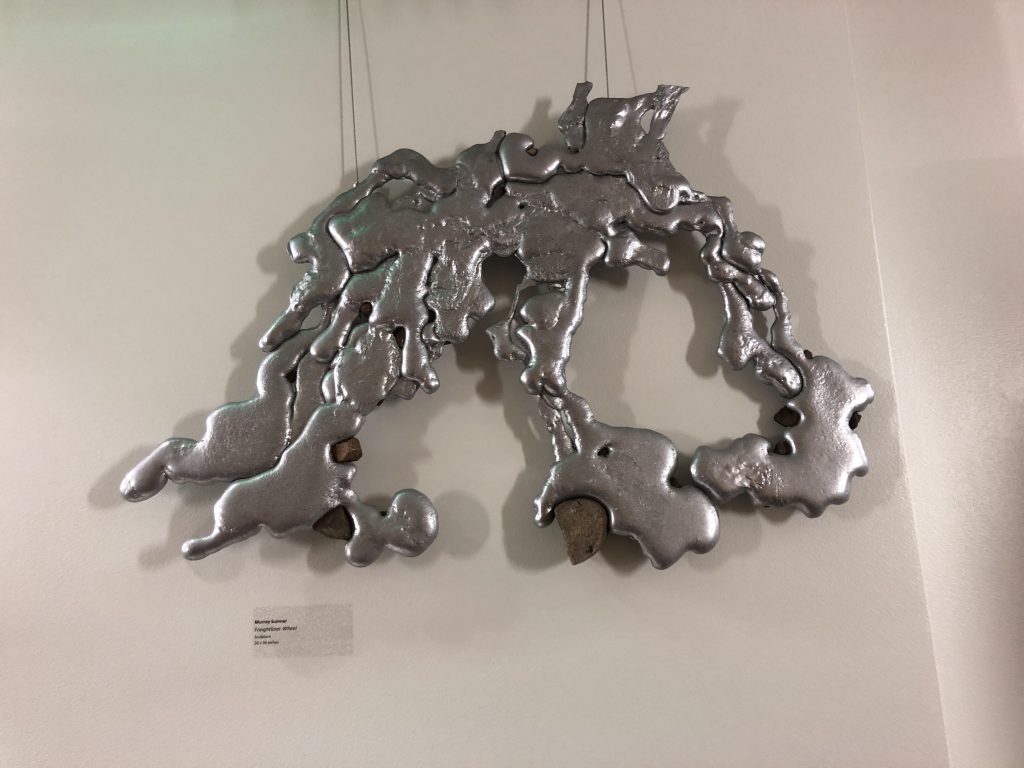 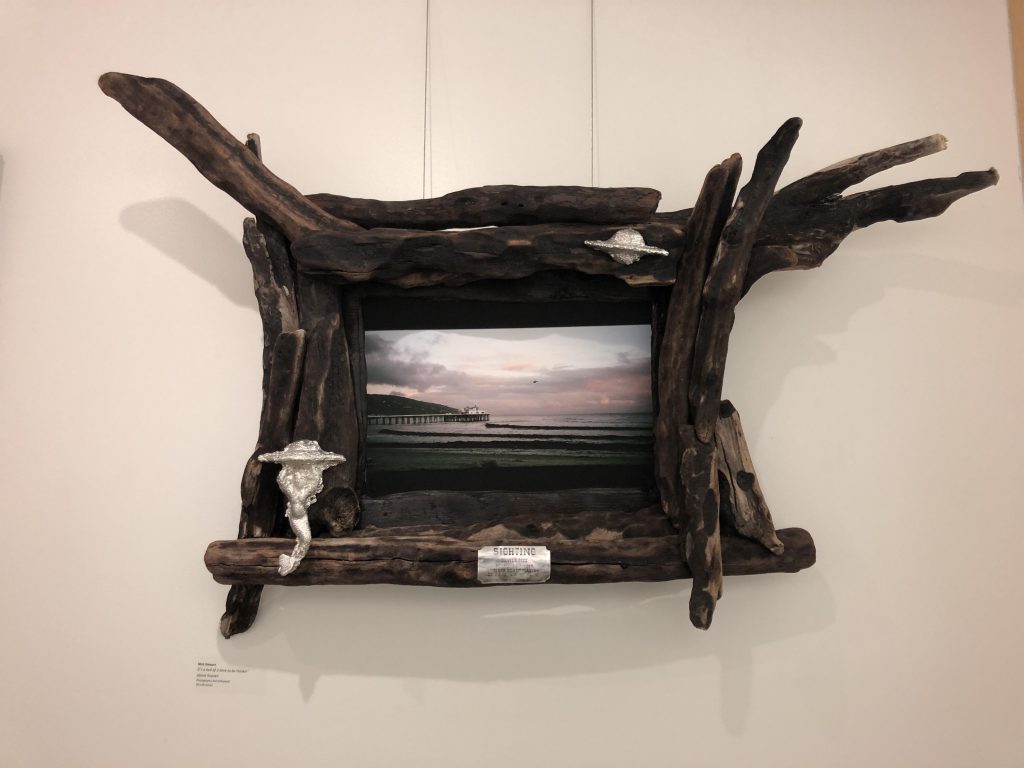 “It’s a hell of a time to be thinkin’ about heaven” by Nick Stewart. Photo by Emily Shaw.

Farrer said the exhibition in its entirety is powerful and has significantly impacted the community as a whole.

Brady said she encourages people to go to the second installation of the exhibition.

The Woolsey Fire exhibition is open to the public Monday through Friday at Malibu City Hall until the end of the year. With the anniversary of Woolsey Fire approaching, visiting the exhibition serves as a way for people to reflect, process and come together as a community.

“In the second wave of the exhibition, we chose things that were also about growth and regrowth and seeing a small flower coming out of the burned ashes,” Brady said. “We chose to look at some of the artwork that people created something beautiful out of the ashes.”