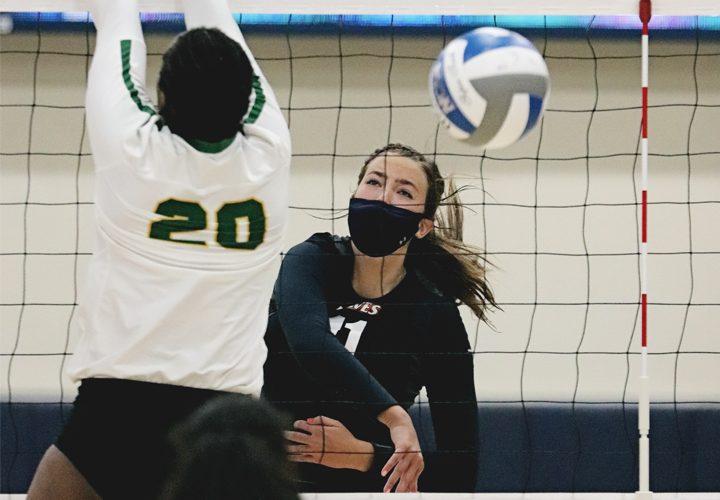 Taking the court at Firestone Fieldhouse for the first time in more than 14 months, Pepperdine Women’s Volleyball delivered two resounding victories over the University of San Francisco on Tuesday and Wednesday.

Junior outside hitter Rachel Ahrens was the Waves’ offensive leader in both matches, smashing 18 kills past the Dons in a four-set victory Wednesday and 10 in Tuesday’s sweep.

“It’s awesome to be back here playing again,” Head Coach Scott Wong said. “A lot of days went by, and there were a lot of question marks to be playing here back at Firestone. Coming away with two really good wins in a good conference — it was great.”

The conference-only 2021 schedule calls for playing each opponent on back-to-back nights, which allowed the teams to be more familiar with each other the second time around. The teams also did not switch sides between sets, a COVID-19-related precaution.

“USF definitely scouted us really well so I think that’s sort of an advantage, playing back-to-back, because you probably won’t see that many changes in the lineups from night-to-night,” junior libero Madison Shields said. “It was weird but we could get into rhythm. Both sides got into a rhythm and understood the player tendencies.”

Shields donned the libero jersey for the first time in her collegiate career, taking over the position following the graduation of four-year starter Hana Lishman. She delivered, notching a career-high 16 digs Tuesday and topping it with 18 on Wednesday.

“I’m really fired up that Scott [Wong]’s giving me this chance to play libero,” Shields said. “It’s what I’ve been looking forward to the past couple years.” 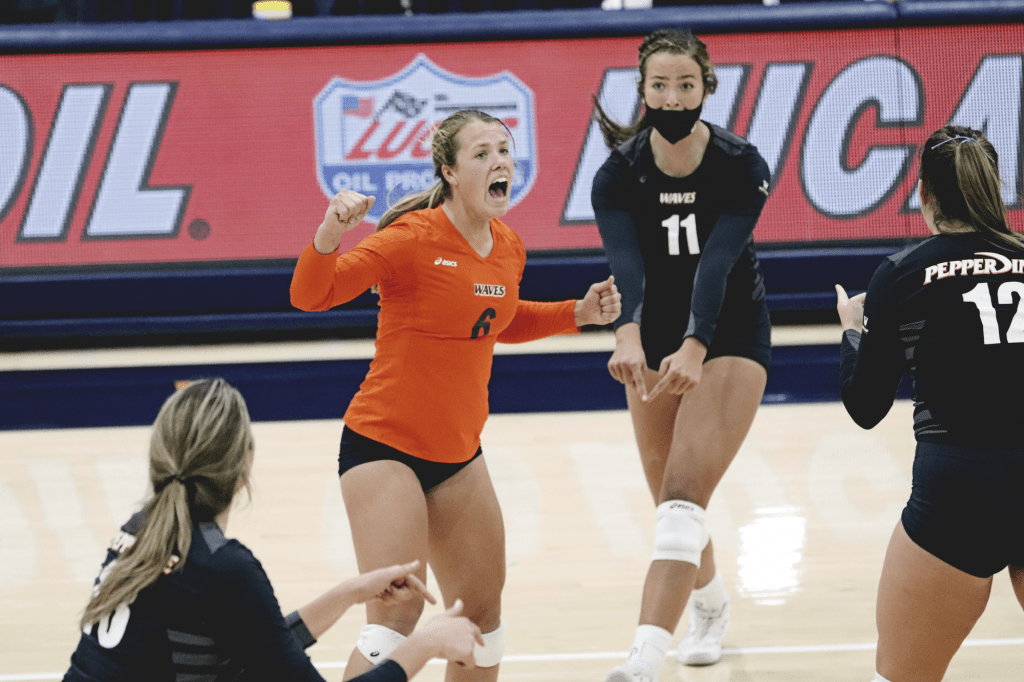 Junior libero Madison Shields (No. 6) celebrates after a second-set point with teammates Rachel Ahrens (No. 18), Emma Ammerman (No. 11) and Meg Brown (No. 12). The wins on Tuesday and Wednesday marked Shields’ first starts as the Waves’ libero.

Shields’ steady defensive play was not a surprise, but the immediate impact of two freshmen was more unexpected, even to the freshmen themselves.

In Wednesday’s match, freshman outside hitter Emma Ammerman and freshman middle blocker Meg Brown were the Waves’ most consistent hitters. Ammerman collected 15 kills on 31 attempts for a .387 hitting percentage, while Brown tallied 12 kills on 17 swings — an impressive .588 hitting percentage.

“I was not expecting to have as big of an impact so quickly,” Ammerman said. “I was ready, no matter what, to come off the bench. In practice, being able to compete against these girls, I knew they were very good, so I wasn’t expecting to play so soon, but I’m very grateful that I did get to play.”

Pepperdine hurt themselves with five service errors in the first set, allowing the Dons to take the set. The Waves’ attacking game was out of sorts in the second set, and the Waves trailed 11-8 after two attack errors and a ball-handling error.

Junior outside hitter McKenna Marshall, who finished with 17 kills and 14 digs, was finding a rhythm for the Dons in the second set.

“We’re going to have a bunch of challenges this year and I felt like that was a big first challenge, to overcome having our backs against the wall,” Wong said. “A tough-serving, scrappy USF team that was doing exactly that — they dug a bunch of good balls. They put pressure on us to play some good volleyball and we rose to the challenge.”

Pepperdine needed a spark. The freshmen provided it.

Two Ammerman kills and a Brown kill later, the Waves tied the set 12-12. The two finished with six kills apiece in the set, as Pepperdine evened the match.

“It’s definitely difficult to play in an environment that’s so quiet all the time unless your team is doing the talking,” Ammerman said. “Coming off the bench, that was really important. On the bench, we are sure to stay super fiery.” 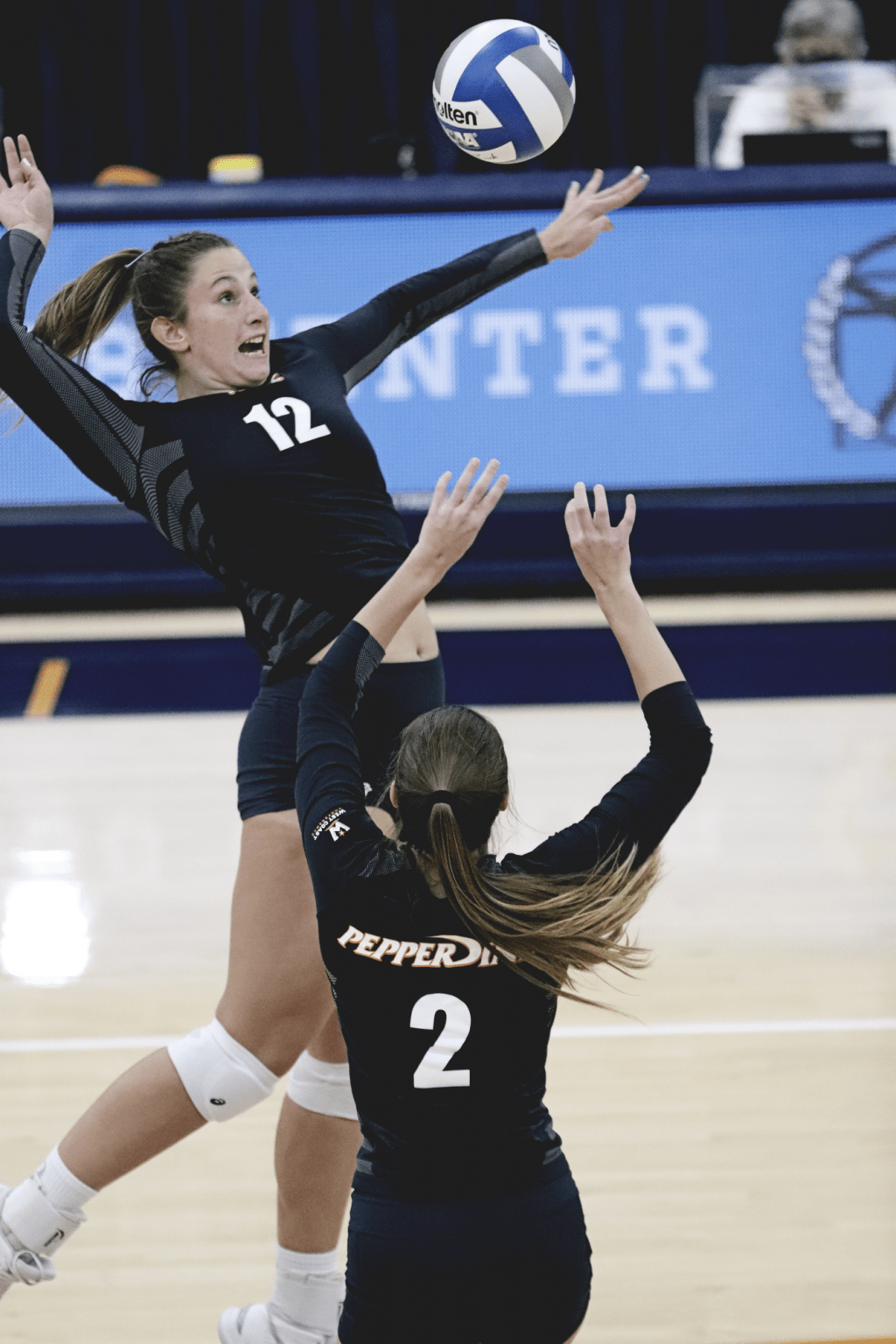 Freshman middle blocker Meg Brown aims and arches for a quick-set from sophomore setter Isabel Zelaya during the second set versus the Dons. Brown hit an impressive .588 with 12 kills in the match.

The Waves controlled the third set, hitting .452 and pulling away quickly. In the tighter fourth set, a block by Brown and sophomore setter Isabel Zelaya punctuated the victory on match point.

Ammerman and Brown provided nearly half of Pepperdine’s offense in the match, combining for 27 of the team’s 61 total kills.

“They’re special players now but they’re going to be really special down the road,” Wong said.

Ammerman said the experienced players on the roster offered her and Brown a smooth transition to the college game.

Ammerman and Brown, each listed at 6 feet 3 inches tall, provide good size at the net following the graduation of 6-foot-5 middle Tarah Wylie.

The Waves had 12 blocks in three sets Tuesday night, with an additional 8 Wednesday. Senior middle Alli O’Harra collected eight blocks on Tuesday, while Ahrens had a career-high six.

“We’re doing some good things blocking but we’ve got a ways to go still, in terms of our block,” Wong said. “We want to be stuffing every ball. If one gets by us, I’ll be all over them, so we’ll keep on working on it.” 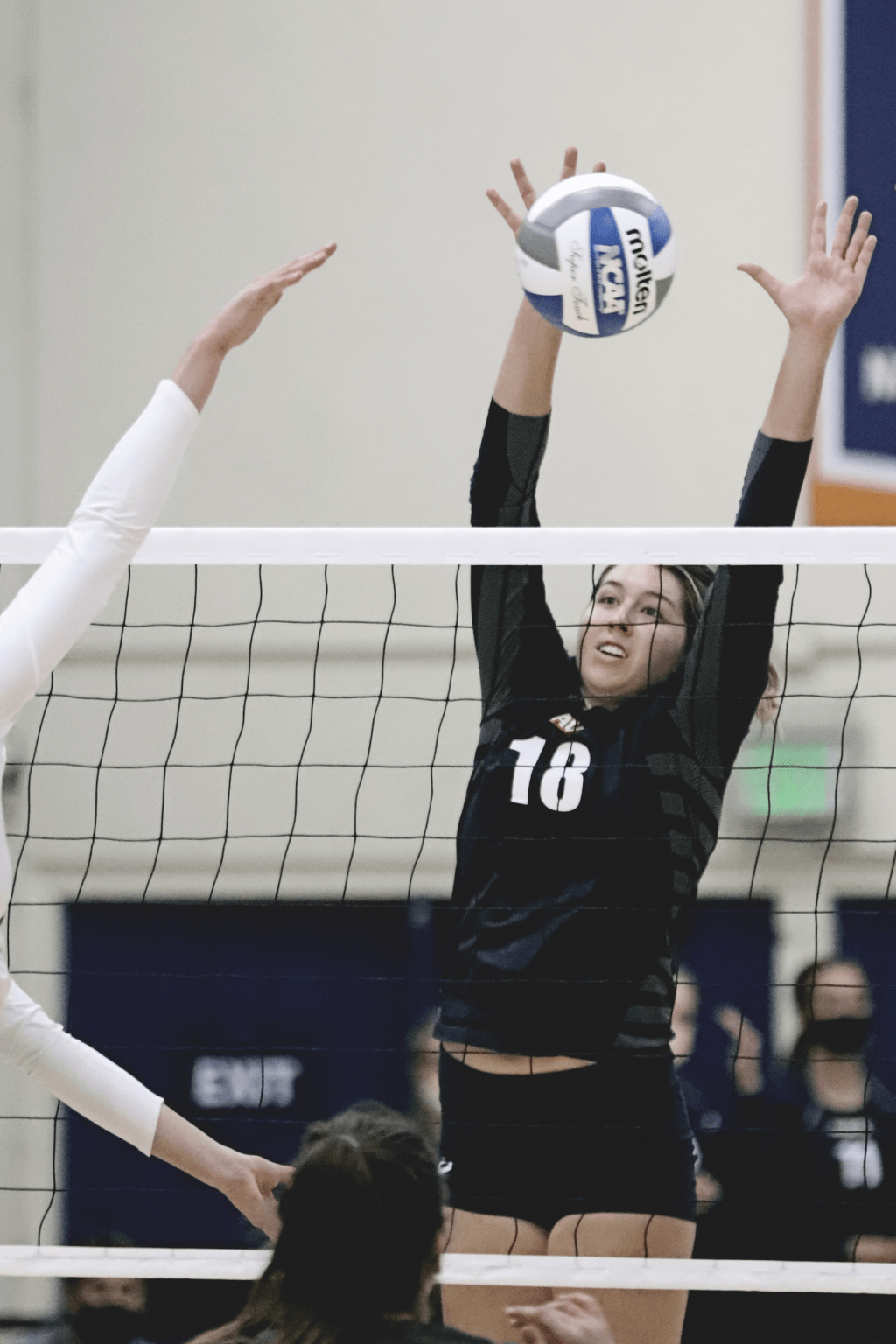 Junior opposite Rachel Ahrens reaches for a block against a USF outside hitter in the first set. Ahrens notched 18 kills and 16 digs in a four-set Waves’ win.

The veteran players, including Ahrens, O’Harra, Zelaya and senior outside hitter Shannon Scully, got off to a good start in the doubleheader.

Zelaya earned a double-double in assists and digs in both matches and even added a career-high six blocks in Wednesday’s victory.

“Rachel’s stepped it up,” Shields said. “She’s always been a great offensive option the past two years, but I think now she’s also helped in the leadership role, being someone that we can go to. Even when the passes aren’t there exactly, she can still find a way to put the ball away.”

The Waves’ next four matches are all in Northern California — two in Moraga against Saint Mary’s College on Feb. 2 and 3, then a doubleheader at Santa Clara University on Feb. 9 and 10.

“We’re super pumped up that we got two good wins at home,” Shields said. “We’re looking forward to Saint Mary’s next week and continuing with that momentum.” 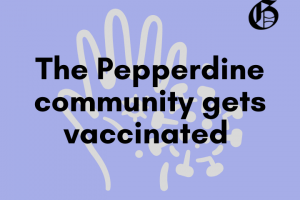 Graphic by Ashley Mowreader Editor’s note: *Name has been changed to protect the individual's privacy. Over a year...
Copyright 2013 Jupiter Premium Magazine Theme
Back to top