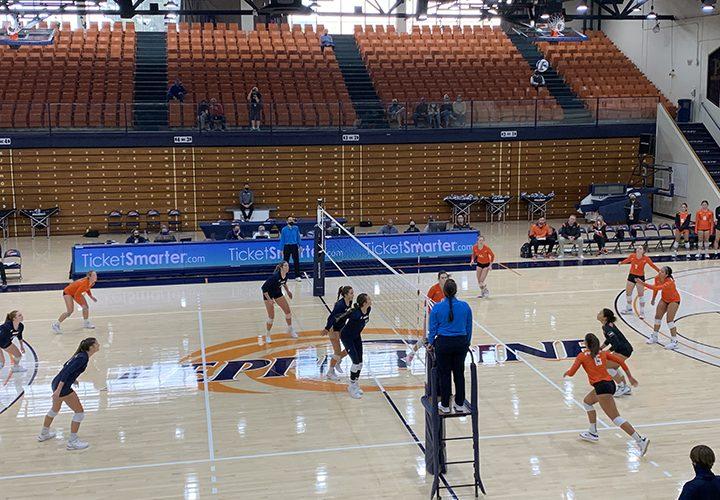 Pepperdine Women’s Volleyball (left side) readies its defense for a Pacific attack in their match Nov. 6. The Waves defense held the Tigers to a -.054 hitting percentage in the first set, and was a big part of Pepperdine’s 3-0 victory. Photo by Alec Matulka

“The girls have been doing a really nice job growing,” Head Coach Scott Wong said. “We talk a lot in our culture of just learning and growing every day, and they’ve been doing that. We’ve been putting them under the fire a little bit in practice and they’ve responded.”

Pacific (11-14) has struggled this season, but has a 8-6 record in conference play. Both teams came into Saturday’s contest riding a four-game win streak. The Waves last met the Tigers in Stockton, Calif., on Oct. 7, when Pacific grabbed a 3-2 victory.

Pepperdine came out strong in the first set, snaring five of the first six points. Senior middle blocker Rosie Ballo earned two of these points with blocks. Ballo was sharp at the net throughout the match and led the Waves with five blocks.

“It’s definitely one of the tools in our toolbox,” Ballo said of the teams’ blocking ability. “It’s definitely getting better every day; it’s becoming one of our strengths for sure.”

After bringing the score back to 5-4, Pacific faded from the contest, as the Waves held them to a -.054 hitting percentage in the first set. The Waves led the whole way, powered by five first-set kills from Ahrens.

At 21-13, Chillingworth registered a kill and a block on back-to-back points, putting the Waves on the edge of a set victory. A few points later, the Waves captured the first set 25-15.

“We made a lot of really good adjustments,” Shields said. “We’ve been working on stuff that we’ve usually been struggling with in matches in practice and you could definitely see that it’s been paying off.”

The Tigers had trouble with their serve throughout the match — they finished with 11 service errors, compared to the Waves’ 9 — and the second set was no exception. After two early service errors from Pacific, the Waves jumped out to an early 5-3 lead. Nevertheless, the Tigers fought to get themselves back into the set.

With the second set poised delicately at 15-15, a Pacific player lined up for a kill that hurtled toward the Pepperdine backcourt. Shields threw herself to her right for a diving dig and popped the ball up into the air with her outstretched arm. Freshman defensive specialist Trinity Stranger tracked the ball down and set it to Chillingworth, who slammed a kill.

“Sometimes it hurts pretty bad,” Shields said of diving on the hardcourt. “Other times, you’ve got the adrenaline running through you and you don’t feel it. Well, the next day you feel it.”

The third set started out close at 4-4, but the Waves pulled away with an 11-5 run. Offensively, the Waves improved as the game wore on. The team’s hitting percentage surged from .192 in the first set to .279 in the second, and increased again to .333 in the third.

When Chillingworth put the Waves up 19-13 with a kill that scorched down the right line of the court, it seemed the Waves were on the verge of a quick set victory. But Pacific won six of the next seven points, and Wong called a timeout to curb the Tigers’ momentum.

“I wish we had a few plays back,” Wong said. “I wish we stepped on the gas a little bit more and opened up that lead like we did in the first set. But I have a lot of trust in these young ladies, and once again they showed why.”

Coming out of the timeout, junior setter Isabel Zelaya — who had 30 assists in the match — assisted Ammerman for a kill and put the Waves up 21-19. Then, with the Waves up 23-20, Ahrens came up big with a kill and a service ace to end the match.

The Waves have now won five straight conference games, dating back to Oct. 21. They’ve only lost one set in that stretch.

Pepperdine is third in the West Coast Conference standings based on conference play, behind BYU (13-0) and San Diego (12-1). The Waves will have a shot at both these teams in the coming week — their two-game road trip takes them to BYU on Thursday, Nov. 11, and then to San Diego on Saturday, Nov. 13.

“We’re fired up,” Shields said. “We’ve gotten so much better in such a short amount of time, and every game we keep getting better and better, so I think we’ll rise to the challenge.”

Students Look to Office for Community Belonging for Actions Toward Inclusivity 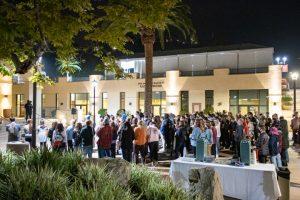 Community members gather on Pepperdine's Joslyn Plaza to remember and honor the victims of the Borderline shooting in 2018....
Copyright 2013 Jupiter Premium Magazine Theme
Back to top