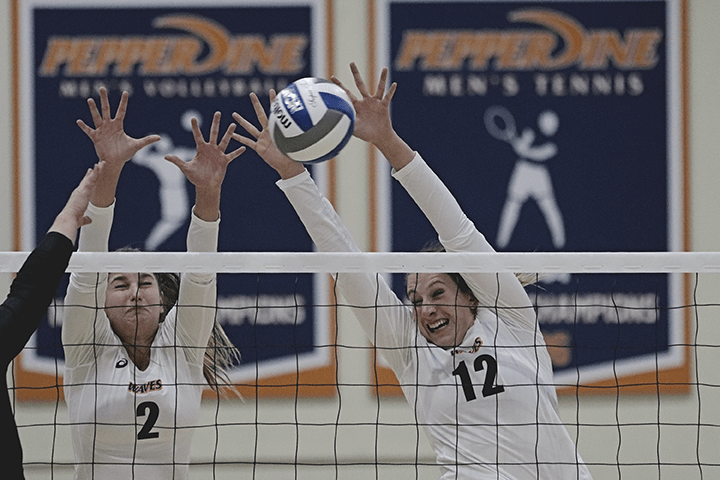 Sophomore setter Isabel Zelaya (No. 2) and freshman middle blocker Meg Brown (No. 12) block a Pacific spike at Firestone Fieldhouse on Feb. 16. The Waves were victorious over the Tigers 3-1.

The Pepperdine Women’s Volleyball team continued its undefeated season in its victory over the University of the Pacific on Tuesday at Firestone Fieldhouse.

The Waves are now 5-0 to start the season, and won their match in four sets. The Waves won the first two sets 25-23 and 25-18, lost a highly contested third set 32-30, then rallied to win the fourth set 25-14, closing out the evening in dominating fashion.

“Down the stretch, Pacific made some really good plays.” Head Coach Scott Wong said. “I thought something that we did really well was focusing on executing our serves and blocks and trying to minimize our mistakes.”

Pepperdine’s blocking ability was on display as freshman middle blocker Meg Brown led the team with 8 blocks and 14 kills in a strong effort upfront.

“I want to capitalize and take advantage of moments like blocks and kills,” Brown said. “You do not always need big plays, but you need to consistently play your best in order to win.” 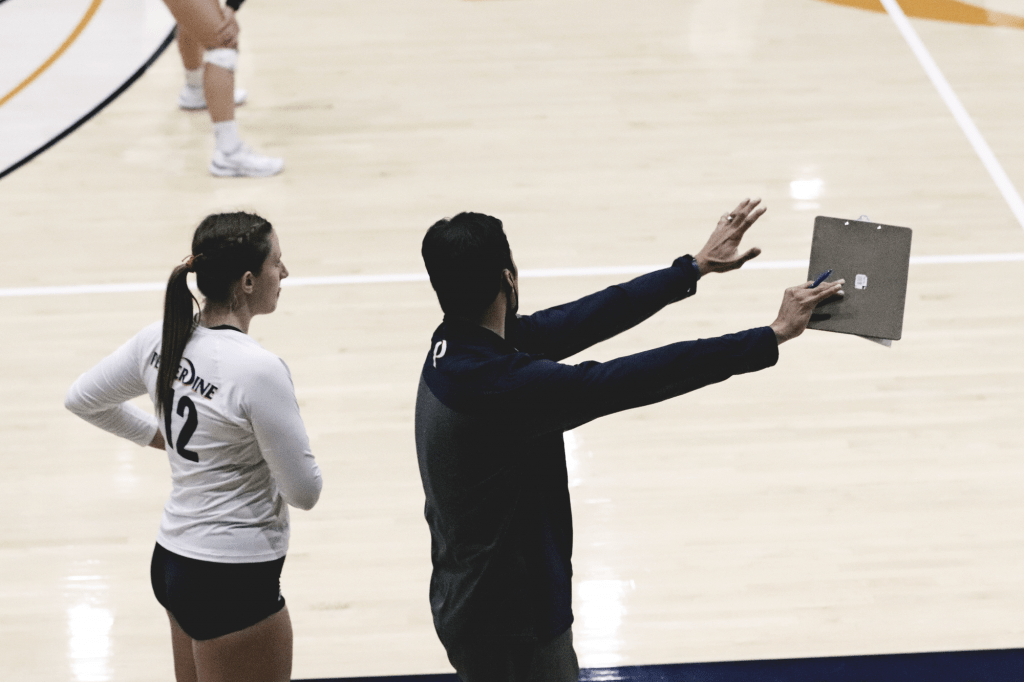 Brown (left) receives instruction from Head Coach Scott Wong (right) at Firestone Fieldhouse on Feb. 16. Brown has been a strong force for the Waves during her freshman year.

The Waves jumped out to an early 6-2 lead, but Pacific closed the gap and the first set became a duel that went back and forth.

With the Waves down 23-22, junior outside hitter Rachel Ahrens made a pivotal block to bring the score to 23-23, then recorded a kill that would give Pepperdine the lead that helped them win the first set.

“It is all about taking care of our assignments that we are given,” Ahrens said. “I think we do our job best when we work well together and make the best plays.” 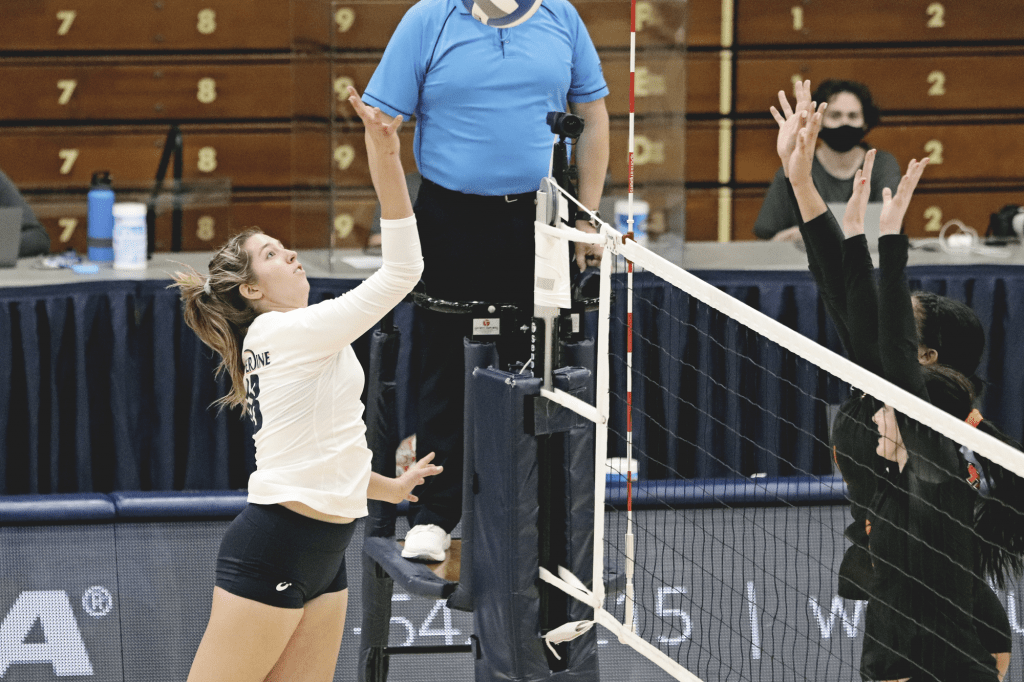 Outside hitter Rachel Ahrens launches up for a tip against awaiting Pacific blockers. Ahrens recorded 11 kills against the Tigers.

The second set was similar to the first, as initially Pepperdine and Pacific battled back and forth. With the score at 7-7, a long rally ended with a key block by Brown that would change the momentum of the game.

After the victorious rally, the Waves never looked back and won the second set comfortably 25-18.

“I think it can take multiple plays or it can take one really big play that changes our mindset,” Brown said. “We wanted to come out and play with an intensity we were missing in the first game, our mindset was a bit off early on.”

In the third set, the Waves were ready to end the night for Pacific in a sweep as they reached match point 24-21.

However, Pacific rallied back and won the set 32-30, sending the match to a fourth set, despite a Pepperdine challenge that reversed a Pacific point when the score was 30-30.

“Pacific made some really good digs and to their credit they won the third set,” Wong said. “I think, similar to game two, we just needed to regroup and focus on what we were doing well which was serves and blocks.”

The Waves readjusted like they did in the second set and started out strong, going up 8-3. Pepperdine continued to dominate as senior middle blocker Alli O’Hara added more firepower, recording six kills and five blocks against the Tigers.

With a strong presence at the front of the net, the Waves won the fourth set 25-14. They fixed many of the mistakes, such as missed serves and poor blocking, that cost them the third set.

“We just had to clean a few things up, and I thought our team minimized mistakes more in the fourth game than in the third game,” Wong said. “Pacific was passing really well tonight so we had to minimize the damage they could do with that.”

Next week, the Waves play a doubleheader against BYU at Firestone Fieldhouse on Feb. 23 and Feb. 24. 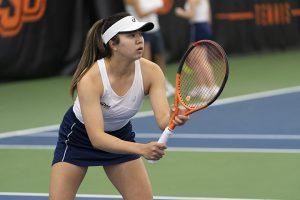