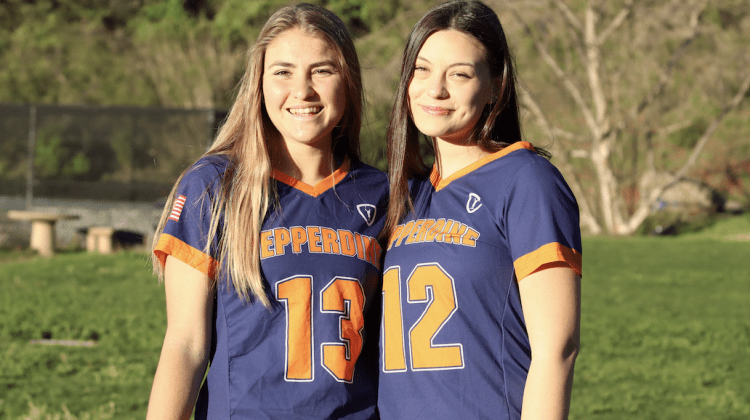 When thinking of college athletics, lacrosse may not be the first sport that comes to mind. It might not be the second, either.

But several players on the Pepperdine Women’s Lacrosse team said the sport has become a vital part of their college experiences.

“All of us have a shared love for lacrosse,” junior Cassie Hewett said. “Some of the new girls say, ‘I just want to be a part of something. I want to be a part of a team of good women.’ It’s important, especially in college, stepping away from home, to have a group of people you know you can call on.”

Women’s Lacrosse is one of the six club sports at Pepperdine. The team holds weekly practices throughout the fall and spring semesters, and generally competes from January until April, Hewett said.

Head Coach Scott Cohen has been with the team for the past five years and said some of the players have little-to-no prior lacrosse experience, while others have played in high school for many years.

“I just fell in love with the sport,” Lee said. “I wasn’t super good my freshman year because I was still building my stick skills, but it definitely is a sport where, if you’re athletic, you can pick it up pretty quickly.”

Pepperdine’s game against USCB on Jan. 22 was its first in nearly two years.

Zoom learning during COVID-19 heavily impacted Women’s Lacrosse, Cohen said. The team planned weekly workouts together over Zoom to maintain their stick skills and fitness, but it was no substitute for being together in Malibu. The team missed a year of recruiting new players, which Lee said has made this season much harder.

The Waves went 2-3 through their first five games of the season, which were all at home.

Coaches and league officials draw up each year’s schedule, Cohen said, with a combination of both conference and out-of-conference opponents. Cohen said Pepperdine attracts a range of opponents from across the country, such as St. Benedict’s from Minnesota, who the Waves beat 9-6, Jan. 28.

The Waves spent the next five games on the road, starting with a trip up to San Luis Obispo to play Cal Poly on Feb. 12. Next, the Waves traveled to USC on Feb. 20, Cal State Fullerton on March 13 and Fullerton College on March 19.

Hewett said it has been a challenge to field a full team at most games, and because of that, keeping games close has been a primary goal. Though Pepperdine’s record stands at 4-7, four of those seven losses were by six goals or fewer.

“You can’t complain about losing when you have five girls on the field,” Hewett said. “There were some games where we thought we would lose by a landslide, and we lost by three points. I’m not going to count it as something to be upset about.”

The Waves traveled to Irvine, Calif., to face Concordia for their last away game of the season March 27. The Waves came out with a 13-8 win, which Cohen, Hewett and Lee all said was a highlight of the season.

Freshman goalie Kamryn Kamps made 13 saves, a career high, in the win against Concordia. Kamps had never played the position before this season, Cohen said, but stepped up when the team’s only other goalie got injured near the start of the year.

Lee has been a big part of the team’s success this season as well, Cohen said.

“She’s someone we’re definitely going to miss,” Cohen said. “She is one of the best midfielders I’ve ever coached, because of everything she does across the field.”

Other standout performers, Cohen said, include freshman midfielder Lily Preis and freshman attacker Molly Skorobohaty. Preis is the team’s top scorer, and Cohen said she is a potential All-American.

“Both of them are top-tier talents,” Cohen said. “I’m so proud of them, because not only have they played so well in the games, but they’re also working with youth athletes, they’re also doing other stuff, managing their schedules and having extra jobs.”

The Waves wrapped up their competitive season April 3 at home against Biola. The team honored its two seniors, Lee and Melinda Colbert, in a senior day celebration before the game. Lee said she was excited to celebrate the growth of the team this year, as well as her personal growth over the four years.

“I’m very saddened by the fact that this is my last lacrosse game ever. I wish I had more time with it,” Lee said.

Pepperdine ended the season with a record of 4-7, and finished fifth in the Western Women’s Lacrosse League Division II Central Conference.

The team has faced a number of challenges, Cohen and others said, that has made competing in their division a more difficult task than usual.

Chief among the challenges facing Women’s Lacrosse, Cohen said, is the program’s size in comparison to their conference opponents. Pepperdine mostly had a roster of 9-10 healthy players. Schools like UCLA, USCB and Cal Poly had 30 players or more.

“We’re competitive with all these big schools,” Cohen said. “However, if we had a bigger bench and we were staying healthy, we could beat these teams. There’s no doubt about it.”

Additionally, while the team played on Alumni Park in seasons past, Cohen said the field required maintenance this year because the University repeatedly used it for events. In the meantime, the team has moved up to Marie Canyon Field. Some team members said the field conditions have been less than ideal.

“It’s perfectly fine, except that tumbleweeds will pass through,” Hewett said. “And they’re like the size of us, and we’re like, ‘Sure, no, super cool. That’s fine.’”

Cohen also said the team has suffered more injuries than usual in the past two seasons, which he attributes to an increased competitiveness within lacrosse, the demanding schedules of athletes outside the sport and the team’s lack of an athletic trainer.

To address some of these challenges, Cohen, Hewett and Lee all said they hope to see the program grow at Pepperdine. More players, more coaching staff and equipment for the team, Cohen said, would be valuable assets going forward.

“Having a consistent coach to build the program has been really important,” Lee said. “[Cohen] is a wonderful coach for this program, he’s really good with new players and being able to revolve practices around different skill levels.”

Along with more resources, team members said they hope acknowledgment of the program will spread more widely on campus.