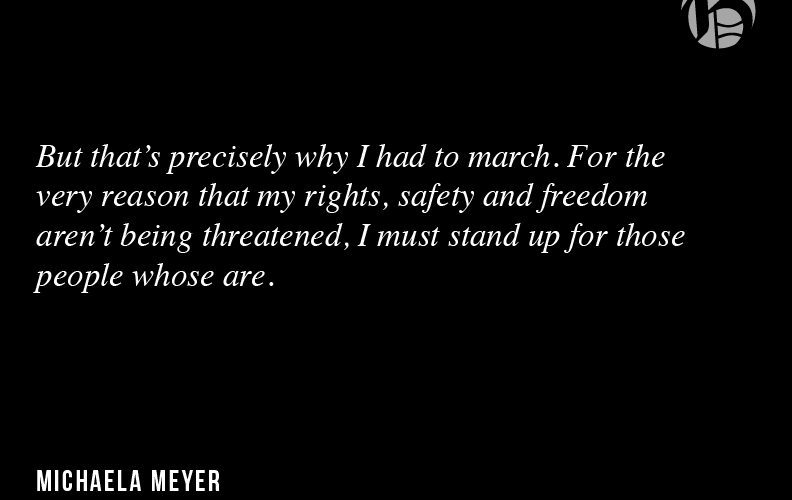 I have to admit I was nervous. My Dad had been caught up in the Seattle WTO riots of 1999, and I knew from his tapes of that day how quickly a peaceful protest could go wrong. I hate large crowds, traffic and parking would be terrible. And with the inclement weather this weekend in Los Angeles, I was full of excuses not to go. It would have been easy for me to stay home. I am straight, White, atheist, and from a family that, while by no means well-to-do, is certainly not living in poverty, either.

I have suffered the general downsides of being a female in our culture, but (so far) nothing direct, nothing personal. I have not been sexually assaulted or harassed on the streets, and I have not been paid less at any of my minimum wage jobs than my male coworkers.

In truth, as much as I might hate a Trump presidency, its effects on me personally will be slim compared to my many LGBTQ+, Black, Mexican and Muslim friends. I don’t have to care. I could just as easily share and like my friends’ march videos on Facebook and feel good about myself — supporting the cause through minimal effort.

But that’s precisely why I had to march. For the very reason that my rights, safety and freedom aren’t being threatened, I must stand up for those people whose are. The Women’s March is not just about women. It sought to connect all of humanity and destroy the prevalent apathetic sentiment in our society which says that I should only care about myself and my own.

There was nothing scary about my day in LA. There was no violence, no property damage, no anger. What I felt was a sense of unity. At least 750,000 in LA had my back, and countless more across the world showed up in support of each other. I have never felt safer in my life. And it was fun — more like a festival celebrating love than a protest.

We did not show up to attack our country, and in fact, many people waved the flag and sang the national anthem. While we did chant things like “not my president” and “hey, hey, ho, ho, Donald Trump has got to go,” the focus was not on anger or anarchy, but how we would continue to fight to improve our country and keep all our progress from being reversed. In other words, we affirmed our commitment to protect the vulnerable.

Incidentally, to anyone complaining that these protests are “anti-American,” consider this: Only in totalitarian countries have the words “anti-nationalist” ever been considered an insult. Democracy is founded on the people’s ability to criticize their government. To be truly anti-American would be to blindly allow your government to do wrong without resistance. 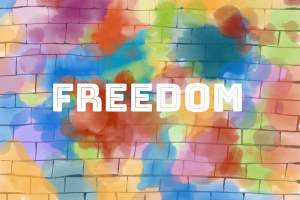 Art by Sybil ZhangThe Freedom Wall — located outside the TCC, near the Campus Bookstore — is a corkboard of individuality...
Copyright 2013 Jupiter Premium Magazine Theme
Back to top