A Pepp student rushes to board the shuttle titled “Wave 5.” Students have utilized the shuttle system during school the week for many reasons: to get to class, back to their dorm, or to avoid taking the stairs.

Hopping on and off the Pepperdine shuttles is something a student will most likely find themselves doing at some point, whether late for a class or taking lunch to Heroes Garden — and the drivers behind Pepperdine’s shuttles have cruised through it all.

“Transit Services is like a vine that intertwines the whole University,” according to the website. There are eight full-time drivers on staff who run Blue, Orange and off-campus routes.

Shuttle drivers have helped community members from all walks of life — from students to alumni and parents to other visitors. They work in all circumstances like fire or a pandemic.

Regardless of who is on campus, there will always be drivers on duty to take care of the community who lives here, driver Nicholas Ditolla said.

“My favorite part is you guys, the students,” driver Michael John said. “I am a very social person and I love to meet and talk with people.”

Each shuttle driver said engaging with students throughout their day makes their loops around campus more meaningful.

“We get a million ‘Thank yous,’ and those kinds of things really make our day,” John said. “It may sound like a small thing but it’s not; it says something about the students in general and that’s why we enjoy working here. Driving is something we have a skill for, but it is not why we are here.”

Following a 40-year career in entertainment as a stunt person for films, John has driven Pepperdine shuttles for two years. John got his commercial driving license in college at Loyola Marymount University as part of a summer job driving for a sports camp. After years of owning his own school bus business, John still puts his talent to use for this post-retirement job.

“I can’t even scratch the surface, I’ve done a lot of things,” John said. “This [job] came up when I was looking for something to do.”

A shuttle driver of four years, Al Hamm, spent much of his career in the LA public transportation system but was drawn to working at Pepperdine when he witnessed the Christian environment — something that is important to him.

“That [LA transportation] is a little different because you get different routes daily and this is an obstacle course,” Hamm said. “I was looking for a job and had the license to drive. I am a Christian and felt like this was a good Christian-based community — that’s what led me to it.”

When they are not driving, John is teaching ski classes in Big Bear, Calif., Hamm is playing sports and Ditolla is visiting the oldest Bob’s Big Boy in Toluca Lake, Calif., on a Friday night for a car show — as he calls himself a “motorhead” — in true driver fashion.

Ditolla is also a guitarist and said he loves to play his favorite music on the shuttle for all to hear, such as Nirvana, Alice In Chains and The Rolling Stones.

“My favorite part about my job is that I love to share music; I am a guitar geek,” Ditolla said. “Students will share music with me and they will turn me onto a band that I have never heard of before and end up really liking.” 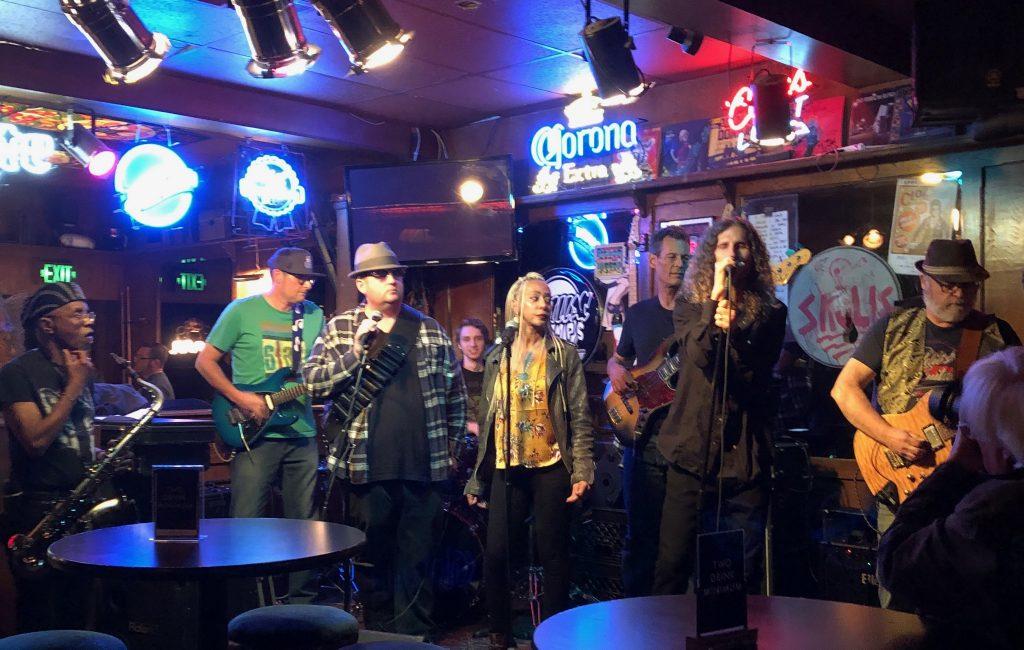 Shuttle driver Nicholas Ditolla (left) plays guitar with his band “Seventh Freedom” at the Sugar Mill Saloon in Tarzana, Calif., in December 2018. Ditolla said his career started as an ambulance driver and he has driven Pepp shuttles for seven years. Photo courtesy of Nicholas Ditolla

From March 2020 to July 2021, many shuttle drivers worked for different departments such as Mail Services or Warehouse Services — John said this made all his colleagues closer than ever before.

As students reutilize shuttle services for the fall, drivers are ecstatic to meet new faces and revisit familiar ones.

“It has been rewarding; it’s been good to have people back and it’s not such an isolated campus,” Hamm said. “Being able to do something different and see different people has been great.”

More than the Loop

Hamm said pre-COVID, the shuttle drivers drove many different events, such as taking certain clubs or organizations to off-campus destinations — such as a Dodgers game Hamm transported students to and has fond memories of. Now, the drivers still enjoy working events whether it is on or off-campus.

Ditolla said he loves working with the Center for the Arts because he immerses himself in the show experience as much as he can while providing a service to performers.

“Rather than getting a five-minute, tiny little interaction with students, I actually get to carry on conversations,” Ditolla said. “Sometimes, as a driver, you get to enjoy theatre events as well because you are just in downtime when the show is going on so you can sneak in the back and listen in.”

Wave 1 stops at Main Campus to pick up riders on its route. Ditolla said there are two shuttle routes, Blue and Orange, as well as eight full-time drivers.

The day in the life of a shuttle driver includes aspects the average student may not think about. Hamm said, during a typical three-hour shift, shuttle operators drive the same route at least 18 to 20 times.

“It honestly never gets boring; I’m just not a person who gets bored in life,” John said. “My favorite part, which really makes it interesting, is that I’ve almost got 100 names now. I’ll soon start the second hundred names of students I know.”

John said the route is made more interesting, but not easier, when people park poorly and drivers have to navigate the road. Ditolla said shuttles have even crashed and around six months ago he had an incident where a construction crane rotated into the side of his bus.

Shuttle driver pet peeves mostly center around student awareness of shuttle presence — such as parking in shuttle stops, stalling in front of the HAWC stairs and not letting people exit the shuttle before entering.

Despite the challenges, as the drivers reflect on their journeys they said they are all thankful for one thing — the Pepperdine community.

Hamm said he loves watching students go from their first day to graduation day. Helping someone get to class on time makes Hamm happy because he initiates a small change in someone’s educational journey.

“I’ve seen students happy after passing their exams, coming on and being cheerful and that’s always a bonus — really being able to see people’s journeys,” Hamm said.

Pepperdine is a university that is ever-changing and shuttle drivers recognize their significance in students’ lives and vice versa — and hope to be here for a long time to come.

“I love education and you guys are the future,” John said. “I don’t want to just sit here while people get on and off, I’ve never been that way in my life. I think we are all here to be encouraging in any way we can be. It is the community aspect, it’s not just social. I mean people care about one another here and that is the difference.”