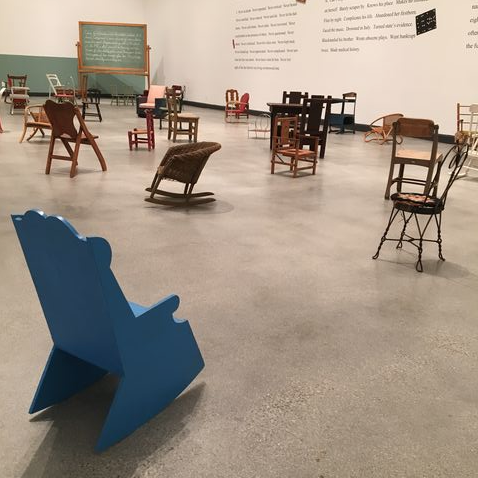 There is a chance one might trip on chairs at the Weisman. No, this is not some millennial slang nor some vague metaphor for a political maneuver in our fraught nation, but a frank observation of California artist Alexis Smith’s exhibit, “Private Lives and Public Affairs.”

The exhibition, curated by Museum Director Michael Zakian, features the work of Alexis Smith, whose collages and installations focus on the subjects of media, gender and power through a combination of words, images and thrift-store finds. 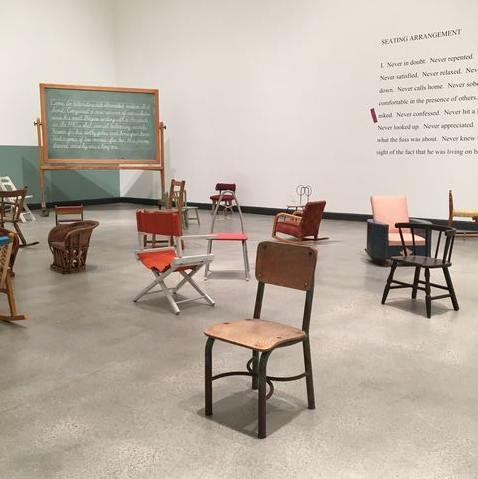 The thrift-store finds — oftentimes kitschy objects with an unknown, yet private life of their own — offer a compelling exhibition in themselves.

“If something seems odd, unusual, offbeat — she collects it,” Zakian said.

The odd and the offbeat pervade the entire exhibition in a way that is often connected to the philosophical and literary. Smith transforms the commonplace and the sometimes unusual nature of a thrift-store find into something uniquely cerebral.

The literary thread that runs throughout Smith’s work is evident in numerous pieces throughout the exhibition, but takes its most prominent role in the installation in the main gallery filled with the aforementioned chairs. The installation, “Past Lives,” is a collaboration with poet Amy Gerstler and was originally created at the Santa Monica Museum of Modern Art in 1989.

The main gallery of the Weisman has been converted into an elementary school classroom where more than sixty children’s chairs collected by the artist are placed in such a way that makes walking a more thoughtful exercise. The classroom atmosphere is continued with wall text redolent of a report-card, a chalkboard with more enigmatic text, this time full of disparately paired sentences, and a cursive alphabet paired with text on the bottom added by the artist.

“The theme is past lives, and she wants us all to meditate and think about who sat in these chairs. What were their lives? Did they have long lives, short lives, happy lives, sad lives?” Zakian said. 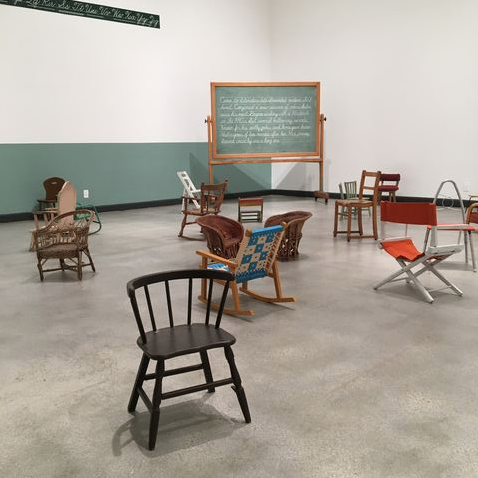 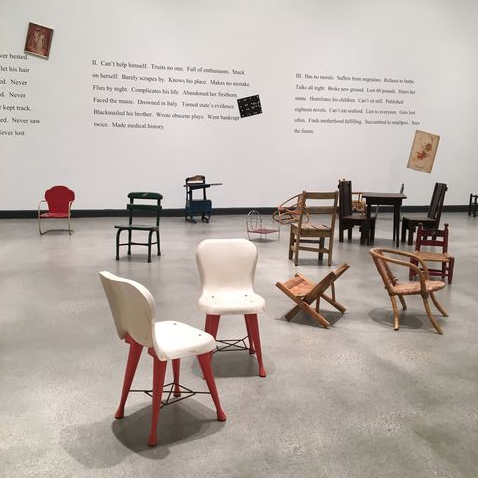 The somber feeling engendered by the installation is not simply a byproduct of empty children’s chairs — something that recalls the title of the work, “Past Lives.” The singularity of this installation — and the exhibition as a whole — might be attributed to the revised sense of normalcy Smith creates and challenges in her work that is drawn from her own life experiences.

Since her father was a psychiatrist, Smith spent her childhood living on the grounds of a mental hospital in Norwalk.

Quoting Alexis Smith, Zakian shared a comment by the artist about her childhood that puts her work in perspective, “’It was just ‘off’ enough to be affecting. It had that edge of nonreality, of literal craziness.’”

Beyond the installation that captures the most attention — and takes up most of the room — in the Weisman, her other work in the downstairs gallery consists of collages paired with text and anachronistic examples of the “fake news” era: the text of newspapers disrupted by the addition of texts and images, like “Cancer City” added to a Marlboro advertisement, or the text “ghosts in cars” and an image of a shirt and a bowtie imposed on a list of trusts and insurances. 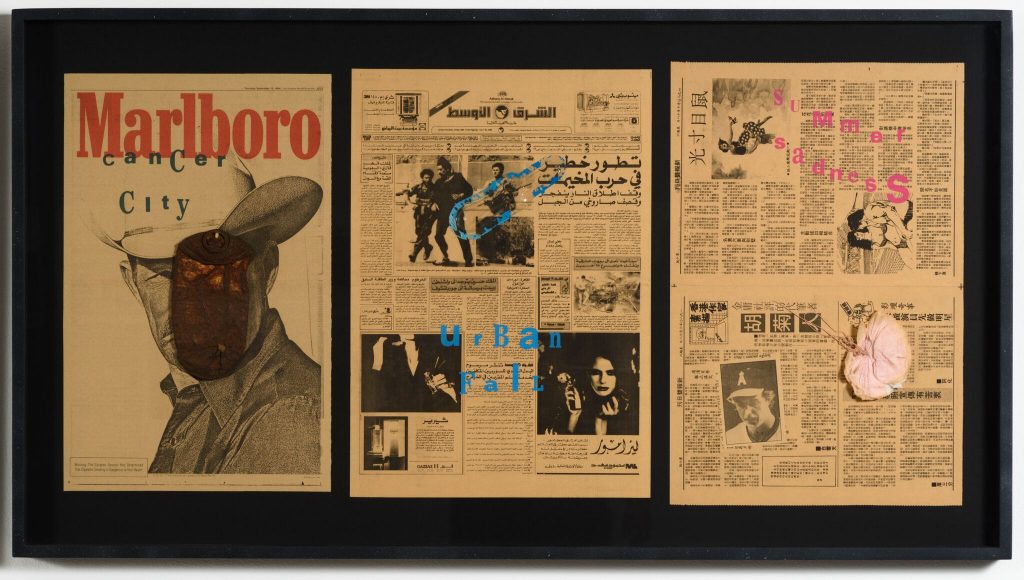 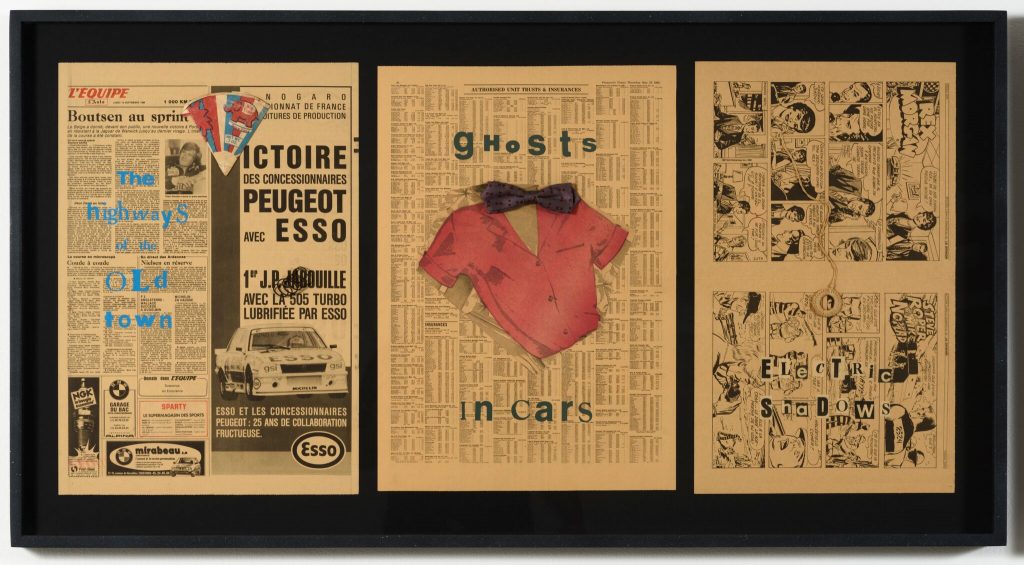 Text from the Thornton Wilder play “Our Town” accompanies Smith’s collage of the same name that consists of the silhouettes of houses with doilies, tape measures and other added materials.

What cannot be expressed by mere images is complemented by the text of Wilder’s play at the bottom of the piece.

“It’s about life in a small local town,” Zakian said. “It’s about how small-minded some people are.”

On one side of the gallery are images that play, with a certain ironic touch, on the foibles of the masculine and the feminine. There’s the “Bodice Ripper,” that depicts a portrait of a woman with a rip through her chest, and a “bodice ripper” — literary speak for a romance novel — placed on top of her chest. 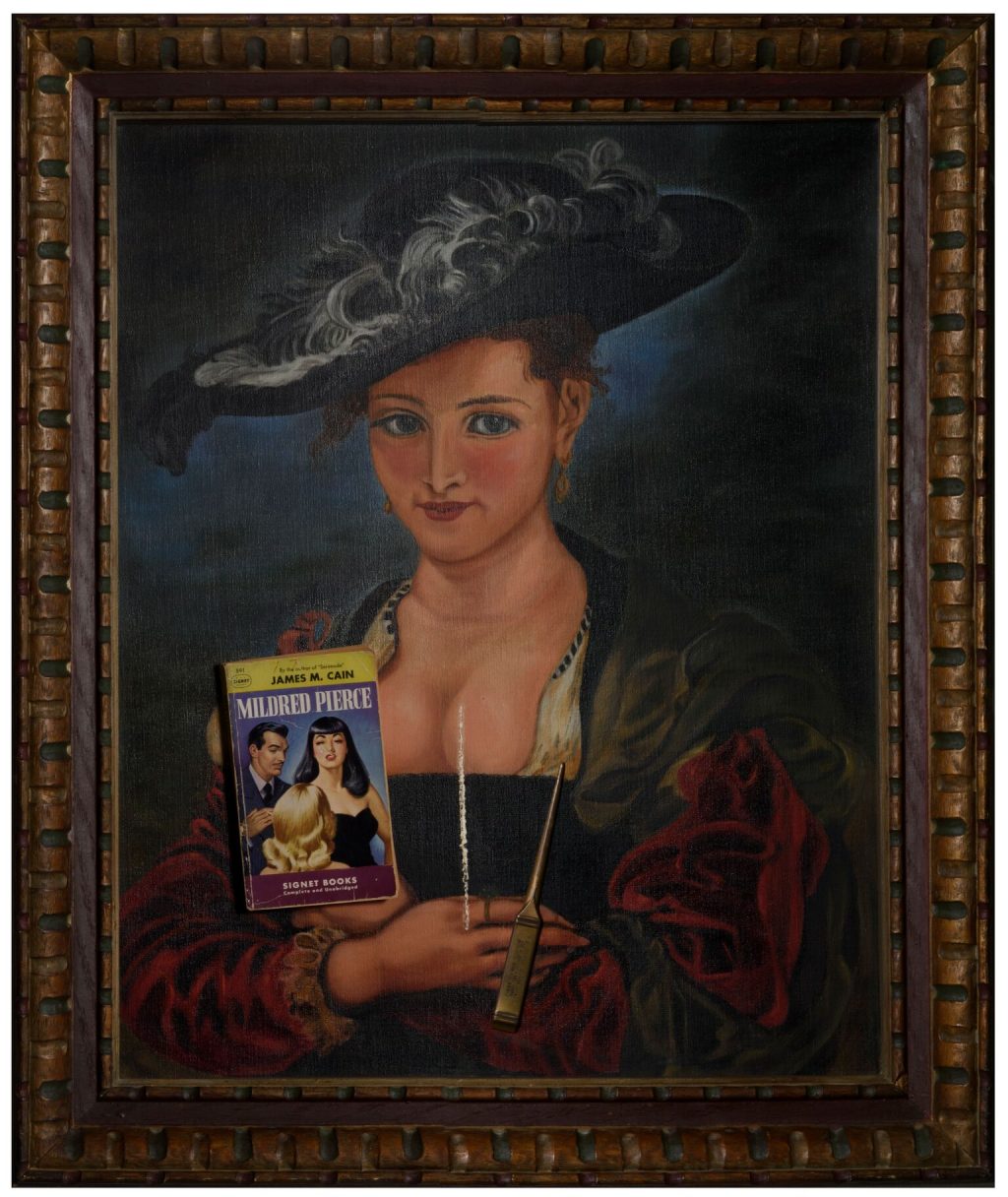 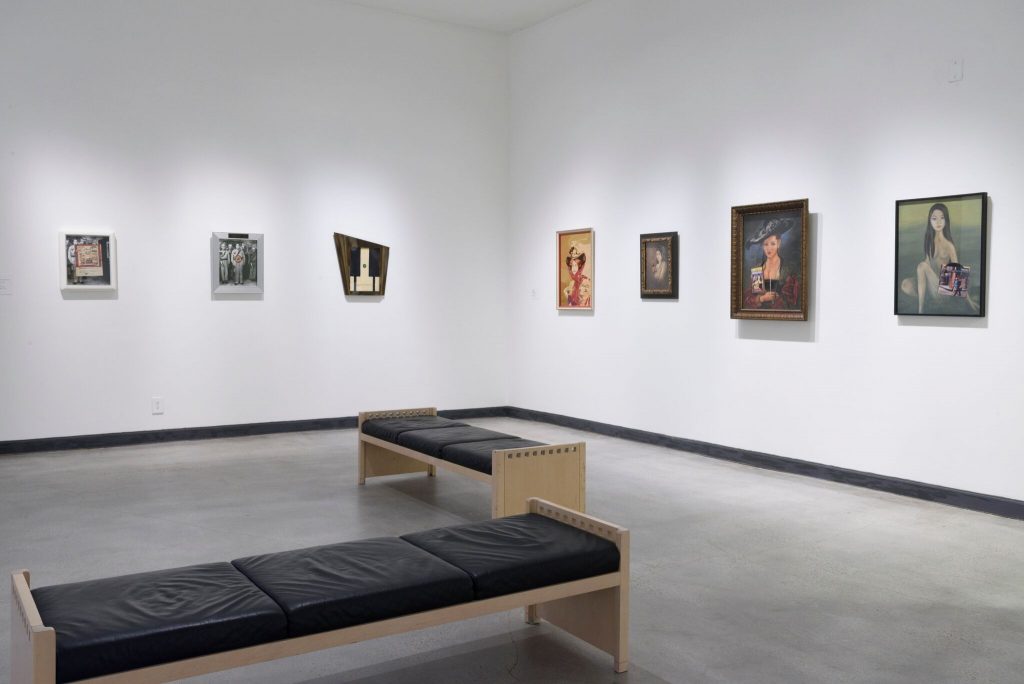 This contrasts with Smith’s “I married a monster from outer space,” picturing a comical phalanx of men from a sci-fi movie.

Women are objects, men — even the ridiculously outfitted ones — are actors in a grand narrative, or even better, they are “monsters from outer space.” It’s a narrative seen time and time again. 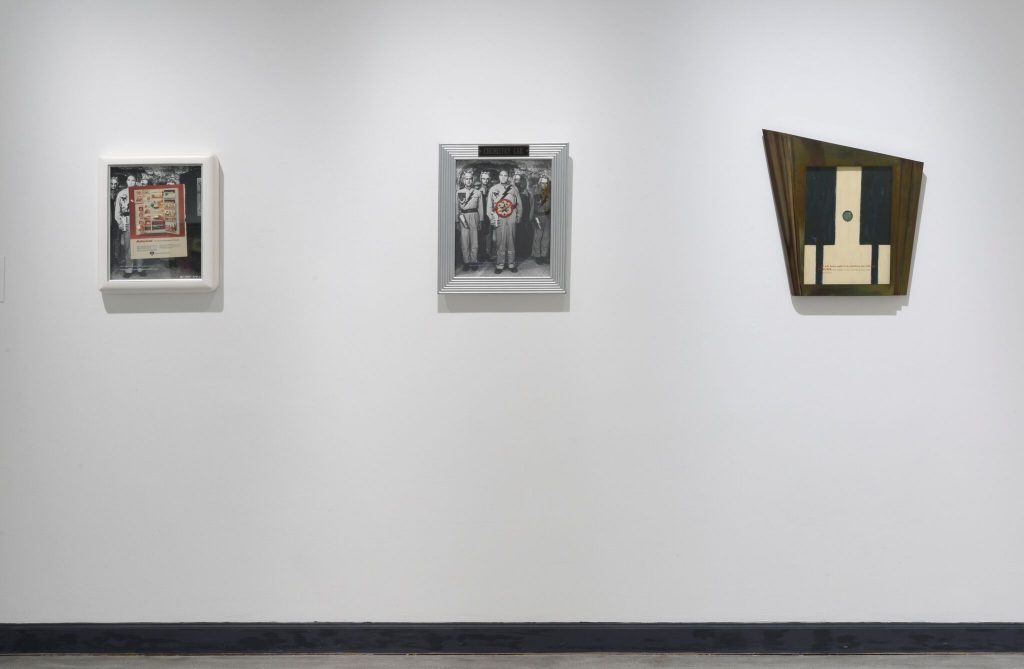 While high school English classes would have us believe that all plot structures are linear, and the denouement will tie up the loose ends, the narrative of an art exhibit can depend on where one starts and the life experiences one chooses to bring to the table.

One possible end to the exhibit’s narrative — among many — is with Smith’s mixed media collage, “The Best of All Possible Worlds.” The piece has a background image, according to Zakian, that “looks like it’s from PBS Masterpiece Theatre,” accompanied by a chocolate box and a “notification of filming” sign. 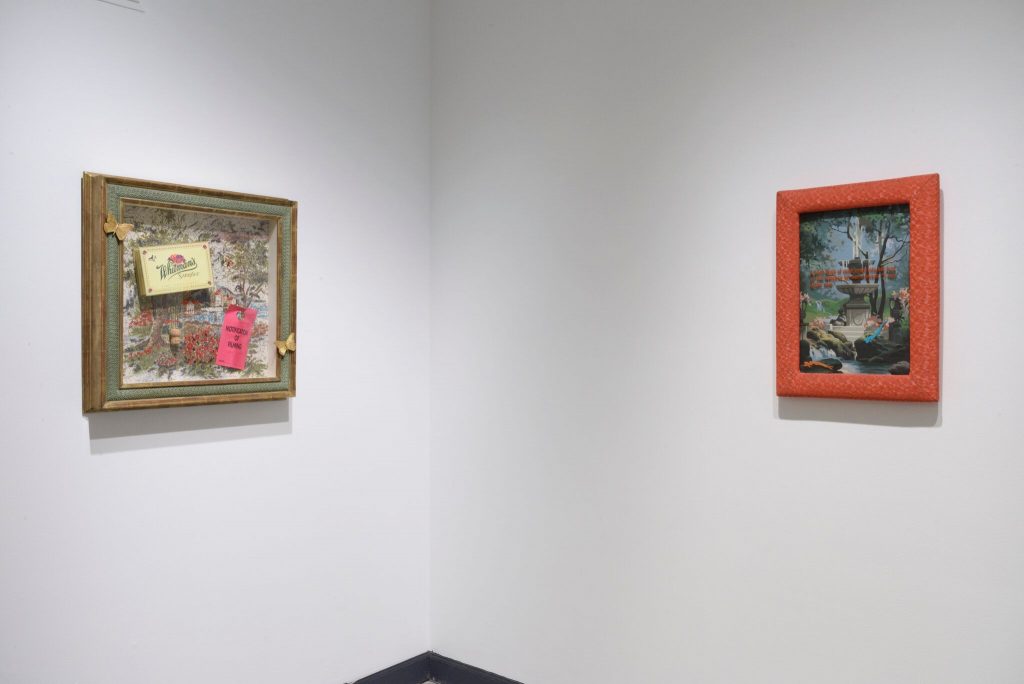 The piece gets its name from Voltaire’s “Candide,” a satire that catalogs the continuous misfortunes of the titular character. The phrase is a mantra repeated by the character Dr. Pangloss throughout the novella and soon becomes mired in irony as the world in which Candide lives strays away from being “the best of all possible worlds.” The world is cruel, sad, illogical, and perhaps most notably, saddles the people living in it with absurd names like “Cunegonde.”

Whatever metaphor is extrapolated from this phrase and its application to the title of this work or its function as one of the many “denouements” of the exhibition is variable. Call it irony, optimism or some other protean truth, it seems to embody the entire exhibition of “Private Lives and Public Affairs” — a hopeful yet melancholy experience. 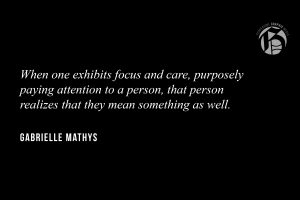 Graphic by Nate Barton Listening is an important skill that creates understanding among people and shows that they matter....
Copyright 2013 Jupiter Premium Magazine Theme
Back to top