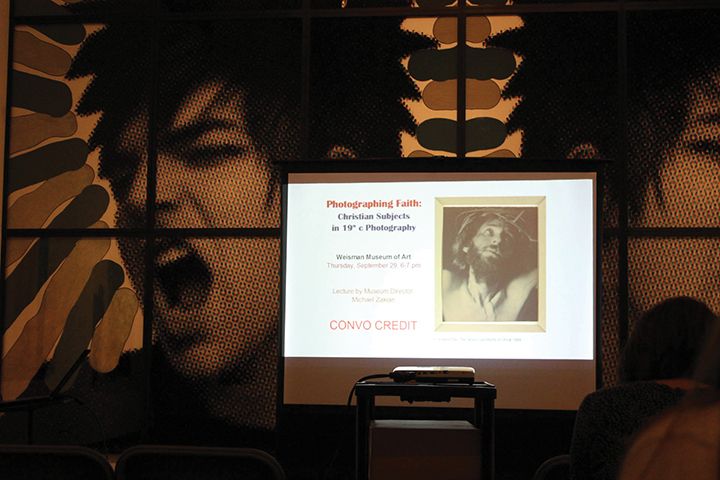 The lecture described how these photographers were essential to the development of photography as an art form; before, it was seen as a scientific and practical method of recording images.

“Seeing those pictures just made the figure of Christ so much more tangible.” Junior Meghan Doyle said, “I think it does serve as an avenue for us to deepen our own faith, to see Christ as a human who suffered.”

“The photographers are still able to create an image that has a more universal meaning,” Zakian said. “And I think that’s really the essence of all great art. I think all great art really transcends its time.”

Zakian also commented on the way modern photographers capture faith. “One thing that a lot of young people are doing is seeing Christ’s journey in their own lives,” he said. “You have fewer people trying to create these theatrical images of Christ’s passion or another scene from the Bible … Those look very dated to our eyes. They look a little bit too theatrical; a little bit too contrived.”

Although we may not see modern artists creating classical depictions of biblical characters, the intention behind faith photography is the same: to externalize and artistically depict one’s internal faith, Zakian said.

Doyle commented on the value of that expression. “I thought it was neat to see such humanity communicated through creativity and such poignant pictures,” she said.

The lecture shed light on the origins of faith photography, a subject not often considered but wholly relevant to the way artists depict faith today. Techniques and subjects may have changed, but the purpose of photographing faith remains the same.

The Weisman Museum currently has a contemporary photography exhibit called Altered Reality, with pieces from the last thirty years. The exhibit will be in the museum until Dec. 4.