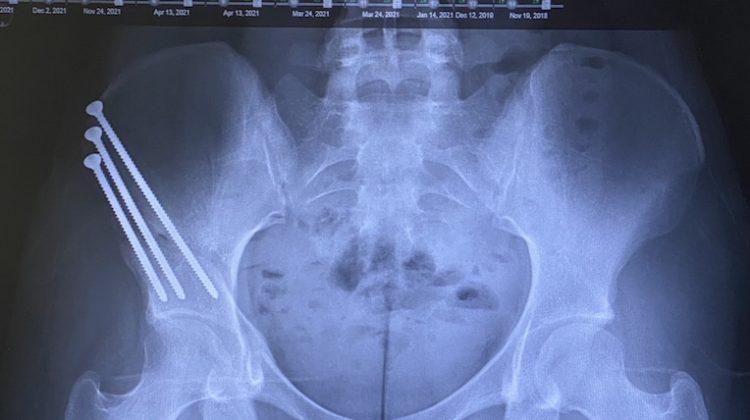 Photo courtesy of Emma Lake | First-year Biology major Emma Lake underwent hip surgery in December 2021, where screws were placed in her hip to help with her hip dysplasia. She will have to schedule another operation to have the screws removed.

Life-changing moments force or allow individuals to take on new roles or new perspectives in life.

Such moments may include transitions from a child to a parent or a grandparent, athletic career-ending injuries or life-shortening illnesses.

“I’ve spent a lifetime weathering storms and then just going forward and being as resilient as I could possibly be,” Sport Administration Professor Ned Colletti said.

Five individuals shared the experiences that changed their life, and the feelings that accompanied each moment.

Individuals at Pepperdine reflected on how certain moments have changed their perspective due to a shift in their role in life.

Colletti has seen his familial roles shift. As his parents aged, he lost his father, and his own children grew up, who had children of their own.

Colletti passed down the family name to his son. He said he named Ned Colletti III after his father, who was battling lung cancer at the time.

“I named my son after my dad, not after me,” Colletti said.

Colletti said his father felt the name was a great honor, while he understood he wouldn’t get to watch his grandson grow up.

Colletti’s father died at the age of 51, around five months into his grandson’s life. Colletti was there to hold his father’s hand as he took his last breath. He said the moment was very impactful to him.

Other moments Colletti said he remembers are the night his daughter became engaged and when each of his children were married.

“I was tearful at both my daughter and my son’s weddings, tears of joy and blessings,” Colletti said.

Colletti said he cries easily because of the blessings in his life. He said he remembers the time he found out his daughter was pregnant, shifting into the role of grandfather.

“I asked her if she wanted me to get her a beer, you know, she said ‘No, it’s OK,’” Colletti said. “I didn’t think twice about it. And then about 10 days later, we’re all together on Father’s Day. And my Father’s Day gift was a picture of the ultrasound of our first grandchild.”

Colletti’s son was married later and decided to keep the gender of his child a surprise. After the baby arrived, Colletti and his wife went to the hospital excited to meet the new addition to the family. They did not know the gender of the baby — they were only told that the new parents loved the name they had picked.

“So we went down to the hospital, and I met Ned Lewis Colletti the fourth,” Colletti said.

He noted this is one of the key life-changing moments in his life.

Shifting gears after an injury

For two Pepperdine students, hip injuries ended their athletic journeys before they arrived to campus.

“I counted because crutches are not fun for that long,” she said.

Lake underwent hip dysplasia surgery Dec. 2, 2021 and spent the next four months using crutches as an aid to walk. The surgery ended her diving career.

“[It] means that my hip sockets are too shallow,” Lake said. “And because of that, it results in constant like, partial dislocations of my hip, which was super painful.”

The December surgery was her third. In her junior year of high school in Fall 2019, Lake sat out dive season to have surgery on her hip to try and correct the pain.

After receiving a second opinion from another doctor, Lake was correctly diagnosed with hip dysplasia and scheduled the final surgery.

“I do remember waking up after and being like, ‘Oh my gosh, I’m done, like I’m finally done,’” Lake said.

Lake said she was happy to know she was on the way to being pain-free but said she still had a hard time with the recovery process.

“I knew it was gonna be hard, but I didn’t really know how hard it was gonna be,” Lake said. “Like I did all the research, I talked to people who had it, I did everything I could to be prepared, but nothing could have prepared me for how much my life was going to be changed for those few months.”

Lake said she lost all independence while recovering from her surgery. She said she had to ask for help with simple tasks, as small as asking someone to help put a blanket over her legs. She had planned on using a wheelchair to shorten her recovery time.

“That was like the plan, but you quickly realize that it’s physically impossible to get around this campus in a wheelchair,” Lake said. “Like, it’s hands down impossible, like, there’s no way you can do it.”

In mid-March, Lake had her first two full days walking. She said she started to feel an absence of pain while she was walking.

“And even with things like driving, I just thought driving was terrible for everyone,” Lake said. “Like I just thought it hurt for everyone and then being able to drive again after surgery, I was like, ‘This isn’t supposed to hurt. It feels great.’”

Pepperdine’s Women’s Swim and Dive team originally recruited Lake to campus. She said it was hard feeling like the surgeries were all for nothing because she had to walk away from the sport.

“I love diving with all my heart, and, like, even two days before my surgery [I] went and I dove for like the last time because I wanted to,” Lake said. “I should be able to do it again at some point, but it’ll be like a year.”

“My freshman year of high school, I was always a really high-level soccer player and, like, that was my entire life,” Rydholm said.

When Rydholm played at a recruiting camp she felt pain in her hips so intense she couldn’t sit up. Rydholm had an MRI when she returned home and learned that she had completely torn through the labrum in both of her hips. Doctors recommended surgery to stitch the labrum back together, and Rydholm accepted, eager to return to a high level of playing.

As she was no longer able to keep up with her teammates, Rydholm decided to quit soccer.

“It was awful,” Rydholm said.

For Rydholm and others at Pepperdine, cancer has changed how they live their life.

Rydholm said soccer and her surgeries aren’t the only moments in her life when she experienced a great change. During her junior year of high school, her brother, Spencer Rydholm, was diagnosed with testicular cancer. Rydholm found through a family group text.

Her brother’s diagnosis, similar to her own surgery, gave her a new perspective on life.

“But definitely, like, I think my whole family and I have a perspective on what matters most in life and things to actually let yourself get upset about,” Rydholm said.

Rydholm’s brother underwent multiple operations as the cancer spread. Rydholm said everything that possibly could have gone wrong, did.

After a final surgery to dissect all of the tumor markers, Rydholm’s brother went into remission. September 2022 will mark his fifth year of being cancer free.

First-year Psychology major Keeton Hanzlik-Green’s father, Alex Green, was diagnosed with cancer the spring of Hanzlik-Green’s junior year in high school. He said it changed a lot of the ways he went about his life.

“I was kind of just focused on school and volleyball,” Hanzlik-Green said. “And I had kind of moved away from doing all the things that I used to do as a kid. But when that happened, it kind of made me take a lot more time to like, do things for myself, I guess. And like, try to be a kid again.”

Over a roughly seven-month period, Hanzlik-Green started to get back to climbing, biking and hiking — three of his dad’s hobbies. He said he would go out and visit his father in the hospital to tell him about the activities he had done.

“My dad, he was living vicariously through me, I guess,” Hanzlik-Green said. “And just kind of like, reminiscing on like, memories that we had is like doing that stuff.”

While he was still alive, Hanzlik-Green said his father emphasized how much he was proud of him for going out and partaking in his hobbies.

“I have been trying to kind of find inspiration in [my dad’s hobbies] to do whatever, do everything that I want to do to like, the best I can,” Hanzlik-Green said.

After his father died in January 2021, Hanzlik-Green said he was even more determined to spend his free time doing the activities his father loved. As a member of the Pepperdine Men’s Volleyball team, Hanzlik-Green has a packed schedule. When he isn’t practicing or working on school, he takes the time to hike and be outdoors in the Malibu area.

While everyone indicated the challenges they faced helped them grow as people and shift their mindsets, it doesn’t mean their paths weren’t bumpy.

“My mom called me to tell me that my dad had lung cancer and changed everything upside down,” Colletti said. “A lot of blessings developed out of it. But not without a couple years of real — real — soul searching and real sadness in a very short period of time.”