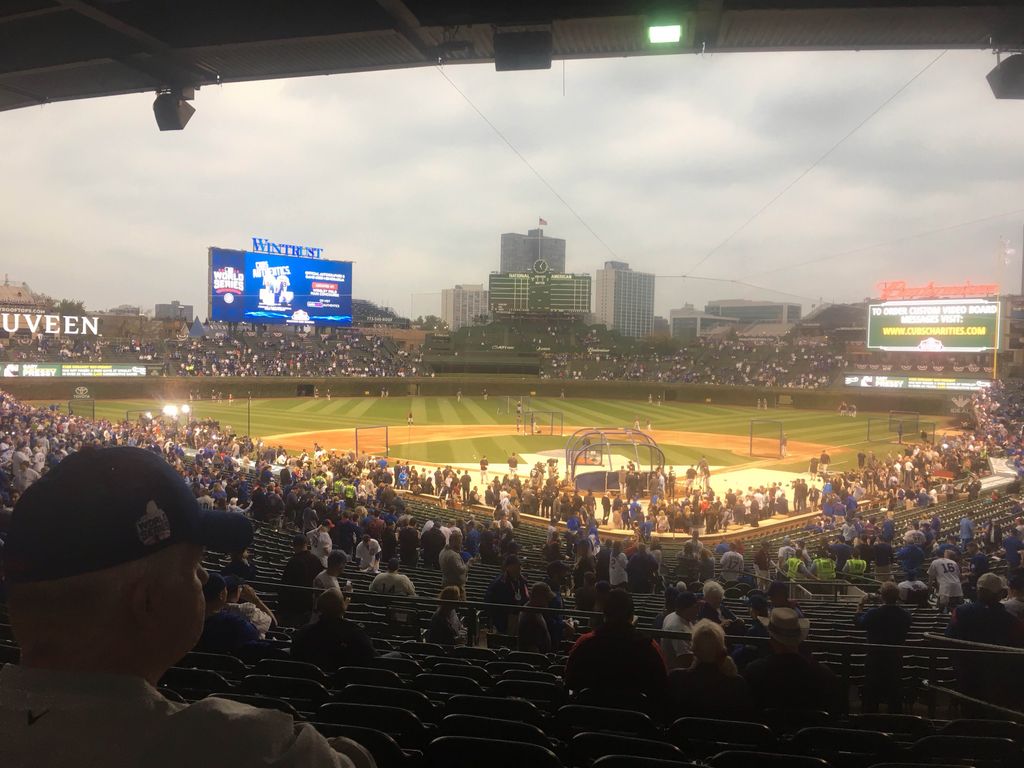 There was an unprecedented energy in the streets, on a warm, windy fall evening in Chicago. The city’s support for the Cubs was on full display. The Cubs signature “W” flag was donned upon apartment windows and streetlights. Fangled statues and architecture, like the brachiosaurus outside of the Field Museum, sported the Cubby blue pinstripes. The skyline was lit up with “GO CUBS GO” through the lights of skyscrapers’ windows. Cubs apparel flooded the streets. The office workers of the Loop accompanied their suits with bright blue Cubs hats. The CTA had converted entire elevated train cars to a Cubs motif of red, white and blue.

Despite it being Halloween weekend, Chicagoans were mighty content to sacrifice their well thought out “Ken Bone” costumes for Cubs jerseys. Experiencing an event of this historic magnitude, the Cubs’ first World Series appearance since 1945, had put the entire city in a state of apprehensive, chaotic, excitement.

But on the Northside of the city, on the corners of Clark and Addison, the unbridled heart of Cubs mania could be felt. Hundreds of police officers lined the streets. Cops dismissed those with opened containers of alcohol simply because they didn’t have the time nor capacity to ticket that many people. Wrigleyville bars had $200 cover charges to gain entry, and as high as $1,000 to have a seat at the bar. Actual World Series tickets were running at $2,000 at the lowest.

Inside the walls of Wrigley, the atmosphere was electric. The buzz in the stadium was unmistakable. The crowd was looking for any excuse to erupt.

But unfortunately for Cubs fans, they weren’t given many excuses. The Cubs bats went missing, as they were dominated by Indians pitching and fell 1-0. The loss coming despite a strong effort by Kyle Hendricks who posted an MLB best 2.13 ERA in the regular season.

With the loss, the Cubs trailed the Indians 2-1 in the series. The party atmosphere in Wrigleyville quickly turned somber. Although the loss was disappointing, fans still held fast in their confidence.

“We’re going to be f***** fine. We went down 2-1 to the Dodgers, and we won in six. I ain’t worried ‘bout nothing,” said a presumably drunken Cub fan named Andrè.

Aside from the hyper-cynical fans, most shared the aforementioned Andrè’s sentiment. The Cubs found themselves in the same situation in the NLCS against the Dodgers and went on to rack off three straight wins to clinch the series in six games.

After the disappointment of being shut out in the first World Series game in Wrigley in more than 70 years, Cubs fans were trying to unleash the uproar that had been concealed in Game 3.

Right away, it looked like the Cubs we’re going to flip the script from their previous defeat. In the first inning, Anthony Rizzo knocked in Dexter Fowler on a two-out RBI single. Wrigleyville went nuts. Within the rumbling roar of the crowd, one could detect a sense of relief amongst Cubs fans. ‘The offense has awakened, we’re up 1-0, we’ve got proven playoff warrior John Lackey on the bump, we’re fine,’ a fan would think.

That feeling of security lasted all of 15 minutes.

The Indians went on to score seven unanswered runs in a seven-inning span, as Cleveland prevailed 7-2. The once jubilant Wrigleyville crowd once again had a complete reversal of attitude. What looked like a Mardi Gras celebration prior to game time turned into a funeral procession. Sulking Cubs fans filed into elevated trains, bodies packed tightly together. Some spoke of the unavoidable disappointment that is inherent with Cubs fandom. Down 3-1, in the series, the situation looked grim for Chicago. Only five World Series teams have ever come back to win from 3-1. But still, many clung on to hope.

“Look, this is the best team in baseball,” a Cubs fan named Reggie said. “We won 103 games. We’re not going away this easy. If the Cubs were to win the World Series for first time in over a hundred years, wouldn’t it be fitting that they come back from down 3-1? I still believe, baby.”

The tension in the air as the game approached was abundantly evident. Anxious fans herded in by the thousands to the ballpark. The Cubs were fighting to see another day. The Wrigley faithful prayed to any higher power that would listen, with hopes that they wouldn’t see their beloved Cubs fall in the World Series. Lefty ace Jon Lester, who had been magnificent all postseason took the bump for the Cubs. He matched up with Trevor Bauer who had seen sporadic success throughout the playoffs.

Game 5 was scoreless in the top of the second inning with two outs when Jose Ramirez ambushed a Jon Lester fastball, launching the baseball to the left field bleachers to put the Indians up 1-0. The stadium was stunned. Would this be the end for the Cubs, the team with the best record in the league, that had seemed all but pre-ordained to take the World Series title?

No. At least not that night.

Cubs’ MVP-candidate third baseman Kris Bryant belted a solo shot to left field to notch the game at 1-1. Chicago would tack on a couple more runs on an RBI infield single from shortstop Addison Russell and a sac-fly off the bat of the eldest Cub, 39-year-old David Ross, to put the score at 3-1.

The Indians would answer with a Francisco Lindor RBI single in the seventh that landed just out of the reach of Cubs center fielder Dexter Fowler.

In the seventh inning, Cleveland would threaten again, putting a man on second base with only one out. In a pivotal move, Cubs’ manager Joe Maddon called for his closer, Aroldis Chapman, the hardest throwing pitcher in the sport.

The flamethrower completely shut down the game, in what was the longest outing of his career. Chapman recorded an eight-out save, striking out four while only allowing one hit. Once Chapman struck out Indians’ star Francisco Lindor for the final out, Wrigleyville was finally given the opportunity to completely lose it.

The sound of the “Go Cubs Go,” the team’s victory anthem, could be heard throughout all of the Northside. The Cubs had won their first World Series game at Wrigley Field in 71 years. Mayhem ensued as fans proceeded to dance through the streets, gyrate celebratory libations and hug strangers. The Cubs lived to see another day, and that’s all the fans could’ve asked for in the given situation: something to believe in.

Belief. That’s a sentiment that Cubs fans have desperately clung onto for years upon years.

But that night, with a home win under their belts and merely two straight wins standing between them and the first World Series championship since 1908, why would fans stop believing then?