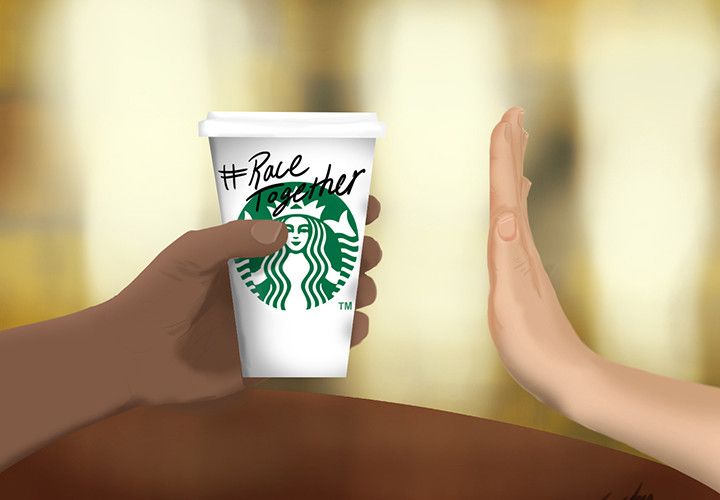 Urban Dictionary defines the term “White Girl” as, “A creature who often posts pictures of Starbucks on Instagram, Tumblr or Facebook. You will always see a White Girl with her Ugg Boots on, Leggings on and iPhone at Starbucks.”

Starbucks no longer has the reputation of serving the average working, commuting American; it represents a punchline that is used to describe the “basic-ness” of the young white female population.

During such a racially charged time in which our country’s equality is being questioned, Starbucks felt the need to do something to change up their image in what they hoped to be a positive way.

Thus the Race Together campaign was created.

Starbucks Coffee Company CEO Howard Schultz and President and Publisher of USA Today Larry Kramer wrote the March 19 article “Why Race Together? Because diversity matters” for USA Today in order to explain their efforts and where their inspiration for the Race Together campaign came from.

“Racial diversity is the story of America, our triumphs as well as our faults,” Schultz and Kramer said in the article. “Yet racial inequality is not a topic we readily discuss. It’s time to start.”

In an effort to spark meaningful and prevalent conversations; Starbucks created a campaign that encouraged people to voice their opinions and stories about present racial inequality.

Starbucks is a prominent franchise that millions of people regularly attend. Taking advantage of this popularity to spark conversation about racial inequality is not something for which they should have been punished.

Some are saying that Starbucks doesn’t have the right to spark such conversations, possibly because of the “white girl” racial stigma that has been attached to Starbucks since at least 2013, when Urban Dictionary created the definition.

In the March 18 article by Lisa Baeirtlein and Bill Rigby for the Huffington Post called “Starbucks ‘Race Together’ campaign brews backlash,” they wrote, “While some customers and shareholders appreciated the effort of a large company to engage on ground-level social issues, they questioned how workers such as baristas, many of them young adults who are not trained to navigate such difficult conversations, would manage.”

In that same article, Baeirtlein and Rigby quoted Kareem Abdul-Jabbar, former NBA star who has been notoriously outspoken about racial issues, who said, “[Schultz] picked the wrong venue with the wrong audience using the wrong spokespersons.”

In contrast to Abdul-Jabbar’s statement, what makes Starbucks the “wrong venue with the wrong audience” might be the fact that most of its customers are predominantly white. In the March 18 article by Bob Collins for NewsCut titled “Starbucks has a thing for white neighborhoods,” an infograph showed that Starbucks stores are predominantly in areas that are 70-75 percent white.

Here is why I disagree with Abdul-Jabbar. I think Starbucks is the perfect venue to voice these types of conversations. The concepts of “white privilege” and “white supremacy” are common in today’s dialogue, so why not attack it at this prominent white source, one where this type of conversation might not be expected?

Schultz and Kramer said they requested to hear the stories of baristas and how they have faced racial inequality throughout their lives and throughout the time they have spent working at the coffee franchise. This is where the #RaceTogether was born.

Each barista was given the opportunity to write this hashtag on a customer’s cup in order to represent that barista’s goal for change, as well as to get that customer to start thinking about present racial inequalities.

Every barista who wrote the provocative hashtag on a customer’s cup became a spokesperson for the Race Together campaign. Abdul-Jabbar said Starbucks used the wrong spokespersons to reach out to the public. But each spokesperson represents a member of the public. How can real people representing real experiences be the wrong choice as spokespersons for this prevalent and controversial topic?

In other words, neither Starbucks employees nor customers are being forced to partake in this type of dialogue. But because of recent backlash, Schultz released a memo stating he will no longer encourage baristas to write the hashtag on Starbucks cups; however, the Race Together campaign will continue.

I think it’s sad that Starbucks has chosen to end the writing of #RaceTogether on customers’ cups because of the negative feedback they have received. I think it was an excellent way to galvanize conversation, while also representing the opinions and experiences of those who work at such a prominent franchise.

These kinds of conversations are necessary to eventually improve racial equality, and other franchises should follow Starbucks’ lead and take a stand for racial equality through different venues and outlets. This kind of attention and notoriety proves how beneficial these conversations are, and why they should be happening more.

I’m a white girl, and with my Ugg boots, leggings and iPhone in hand, I will #RaceTogether. Will you? 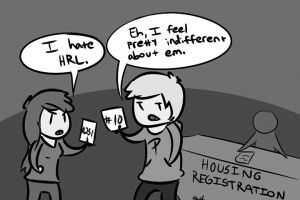