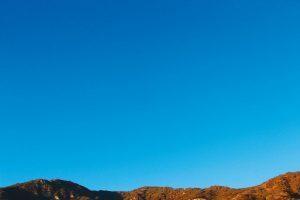 It’s a more-or-less typical graph: a fluctuating line with high frequency, low amplitude waves, following an overall exponential curve. For those who aren’t mathematically inclined, the graph is of little interest. At least, devoid of its meaning.

What the graph shows is an image of the world breathing; the metabolic rate of the whole globe.

Known as the “Keeling Curve,” the graph documents the amount of CO2 in the atmosphere from the Mauna Loa Observatory, and it’s been doing so since 1955.

It is because of the Keeling Curve and research like it that Pepperdine has 530 acres of open space territory set aside.

The yearly spikes in carbon levels represent winter for the plants surrounding Mauna Loa; the rapid dips signify spring and the return of vegetation. The overall trend in carbon levels is upward, but the yearly reappearance of plants has so far kept the carbon from reaching dangerous levels.

The plants are called “the sink” because they drain CO2 from the atmosphere. It’s a process called “carbon sequestration.” It improves the air quality and breathability, and the removed carbon helps to create oxygen and carbohydrates within the plants.

“It’s the basic elements,” Davis said. “We need the stuff on that hillside.”

But the vegetation surrounding Pepperdine is more unique than the average oxygen producer.

According to Dr. Philip Rundel, disntinguished professor of biology at UCLA, a biodiversity hotspot is a habitat that has already lost at least 70 percent of its original natural vegetation and contains a variety of flora and fauna that can be found nowhere else on earth.

This means that Pepperdine’s backyard houses some of the most diverse and rare vegetation in the world.

One plant — laurel sumac — has roots that extend 40 feet into the soil and hold the Santa Monica Mountains in place. It is found in only two places in the world.

Another has roots nearly on the surface but can withstand pressures exceeding 100 atmospheres. To put that in context, an average car tire contains about two atmospheres of pressure.

This is cool from a biologist’s or botanist’s perspective, but the diversity of vegetation surrounding campus is becoming increasingly important, especially in regard to climate change in California.

Over the past 60 years, the population of California has jumped from 10 million residents to 38 million. Urbanization of the state has created “fragmentation” on the isolation of natural wilderness areas within human developments.

With new developments still on the rise, there is mounting concern that the lack of “habitat linkages” (wilderness bridges from one open space area to the next) will prevent new growth of rare flora and perhaps extinguish them altogether.

“The city of Los Angeles is already impacted,” Rundel said. “No vegetation is allowed to get in.” 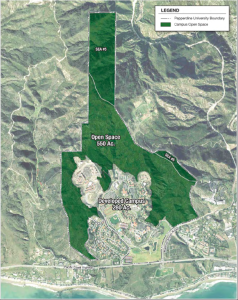 Map it out — Out of the 830 acres of space Pepperdine owns, 550 of them are open. The open space is necessary for the health of the environment.
Photo Courtesy of California Coastal Commission.

The more our rare plants are isolated or die out, the more likely it is that global climate change could have a severe impact on vegetation as a whole. The natural breathing of the world will suffer, and carbon levels will continue to rise at faster rates.

Pepperdine’s open space isn’t only a nice hiking spot or a neat place to see a herd of deer; it is a needed hub of biodiversity, pivotal for preservation and research.

Davis has monitored the native vegetation in a biological preserve above Pepperdine’s law school housing for more than 20 years. With students, he has studied the recovery and adjustment of the local flora following major fires. The resilience and adaptability, he said, is a miracle.

Data collected from the preserve has been compiled and is being analyzed to forecast what may happen with regards to the future of the native plants, but there is still a lot of necessary information missing on the question of climate.

“A lot of it is mystical and we still don’t understand it,” Davis said. “We have a lot to learn, especially with climate change. We need to care for it.”

WHAT HAPPENED Officials at both USC and Occidental College have admitted to underreporting the number of sexual assault...
Copyright 2013 Jupiter Premium Magazine Theme
Back to top