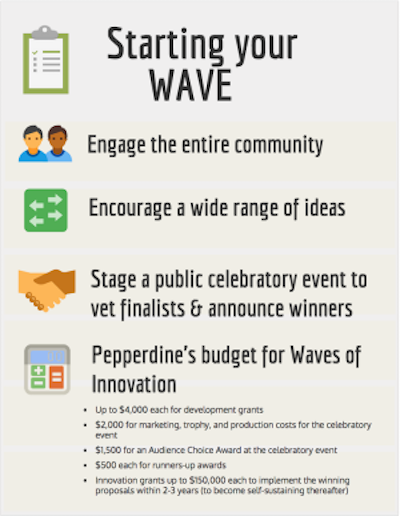 Pepperdine sets the example for innovation. Recently, President Andrew K. Benton’s brainchild, Waves of Innovation, was adapted into a detailed outline for other universities to follow, if interested in adopting a similar program.

After working closely with Benton and Vice Provost of Research and Strategic Initiatives Lee Kats, the TIAA-CREF Institute released its report, titled “Waves of Innovation: Creativity and Community at Pepperdine University.”

“This is basically just the story of a single academic institution seeking community engagement and looking for ways to get faculty, staff and students … to talk about ways in which we can enhance teaching and learning,” Benton said, thumbing through the report. “To talk about ways we can foster scholarly, creative activity, to create new revenue opportunities.”

TIAA-CREF is a financial services company that primarily caters to colleges, universities, nonprofit organizations and the employees of those organizations, according to Anne Ollen, the senior director of the TIAA-CREF Institute.

TIAA-CREF is also a Fortune 100 company that serves 4.8 million individuals and currently has $834 billion in assets under management, according to their website.

The TIAA-CREF Institute, which actually published the report, is a think-tank within its parent company, Ollen said.

“Our mission is to build and share knowledge not directly about TIAA-CREF products and services, but more about the issues of critical concern to those who lead or work at the institutions served by TIAA-CREF,” Ollen said.

The Institute first became interested in the Waves of Innovation program after Ollen met Kats at a conference in New York. When asked about something exciting happening at Pepperdine, Kats told her about the program, Ollen said.

“I followed up with him because one of the institute’s goals is to help leaders at colleges and universities across the country increase their organizational effectiveness,” Ollen said. “And I thought that by using Pepperdine’s success with their own program as a case study … we could inform and help other leaders introduce similar programs, or at least be inspired by the creativity and success of the program.”

Derek Stoutland, one of the winners of Waves of Innovation, said the program changed his Pepperdine experience and ultimately the course of his career. Stoutland’s winning idea was for a financial literacy program. That program will be offered as an upper-division general education course starting spring 2016.

The first-year Graziadio student said he thought making the Waves of Innovation program available to and adoptable by other institutions would only be to their benefit.

“I think it’s an amazing opportunity for schools to let creativity flow,” Stoutland said. “There [are] no boundaries.”

A copy of the report is available on the TIAA-CREF Institute website at tiaa-crefinstitute.org/public/institute. There is also a transcript of an interview with Kats conducted by Campus Technology about Waves of Innovation available at campustechnology.com.

Benton said when Kats approached him with the idea of working with TIAA-CREF on the creation of the report, he agreed immediately and they began the collaboration.

“I really think of [Kats] as doing the heavy lifting,” Benton said. “But we both worked on writing this report and editing it into something that sounds like a little bit of both of us.”

When asked about the creation of the report, Kats gave credit for the bulk of the work to his collaborator.

“Frankly it was a pretty long process,” Kats said. “It wasn’t the kind of thing the president and I whipped up over a weekend.”

The majority of the work drafting the report was done by Kats and Benton. Eventually it was submitted to the TIAA-CREF Institute for an internal review. The institute responded with comments and decided on the layout, Ollen said.

Benton said the idea for Waves of Innovation itself came about two years ago. He said that he woke up one day and decided it was time for Pepperdine to make a shift towards being a university that takes “calculated risks.”

Speaking about the ideas and programs that have come out of Waves of Innovation, ideas that Benton said could ultimately streamline the organization and strengthen Pepperdine’s brand, he said, “Ordinarily that stuff is done by deans and provosts and presidents. But why not ask students about that?”

Kats explored what other universities were doing, but found nothing that resembled what he and Benton were trying to accomplish. That’s when they said they decided to create a committee, and together they created the program, essentially from scratch, Kats said.

“President Benton was really proud of Pepperdine’s historical entrepreneurial spirit and was looking for a way that, programmatically, we could recapture it,” he said.