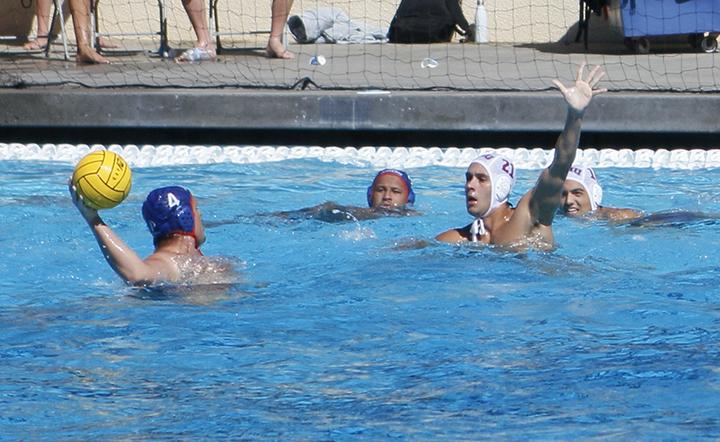 Freshman center defender Nico Tierney looks to shoot in the fourth quarter at Raleigh Runnels Memorial Pool on Feb. 21. Tierney has been lethal for the Waves in his first season.

The No. 5 Pepperdine Men’s Water Polo team capped off an undefeated weekend over PCH cup rival No. 6 Loyola Marymount on Sunday at Raleigh Runnels Pool.

The Waves were victorious 17-9, showcasing their strong defensive and offensive abilities against the Lions. The Waves were also victorious against No. 10 San Jose State 13-10 and 17-10 on Friday and Saturday, respectively.

“I think this was definitely our best game defensively, and we had LMU very frustrated,” Schroeder said. “We watched video and when you can start to frustrate the other team with your defense, you start to open things up on the other end.”

Schroeder said the defense improved significantly from their play against San Jose State earlier in the weekend.

“Throughout the weekend we have gotten better each game,” Schroeder said. “Friday was and we played well in the first half on Saturday. Today we strung together four good quarters, so it was a great team effort.”

The Waves were lethal on offense and put on a clinic against the Lions throughout the game, and Pepperdine displayed its sharp shooting ability.

Freshman center defender Nico Tierney was sensational on offense, as he had a career high five goals and was unstoppable throughout the game.

“We have moving guys around the offense throughout the game trying to find open space and open guys,” Tierney said. “The last few games we have been building as a team and creating open lanes to convert on offense at a much higher rate.”

In addition to his stellar performance Sunday, Tierney scored three goals Friday and another Saturday, bringing his total to nine for the weekend.

“Nico is a freshman but he is finding his place and contributing to our team quickly,” Schroeder said. “He’s got potential to be a national team player.”

Another player who was outstanding this past weekend was junior attacker Curtis Jarvis, who notched four goals against LMU to go along with his five Saturday and two Friday against San Jose State.

“We got a lot of guys involved and a lot of different guys scoring, so that is a good sign,” Jarvis said. “Our new guys and new freshmen are stepping up in a big way which will be great for us moving forward.”

The young additions to Pepperdine’s team are mixing in well with the veteran talent that won the Golden Coast Tournament in the fall of 2019.

“We have guys who have been around for a while and were part of the team that finished third in the country,” Schroeder said. “We have a lot of young players and I think the potential for this team is really great.”

Jarvis also said the team is getting better each game and that their team chemistry is only going to improve throughout the season.

One of the talented young players who played a major role in the team’s victory against LMU was sophomore goalie Kent Emden.

After redshirt junior John Claude Marco’s starts against San Jose State on Friday and Saturday, the Waves started Emden in the cage for Sunday’s game against the Lions.

“We have two goalies who are coming off hip surgery and are continuing to heal,” Schroeder said. “Kent has been coming off strong and has been playing really well. He is feeling more comfortable in the cage and he has a bright future ahead of him.”

Emden did not miss a beat coming off of Marco’s performance. The sophomore recorded 10 saves and did not allow a goal in the first 8 minutes of the game or in the third quarter.

“We had a couple of really good shot blocks during this game, dropping back and helping each other out with communication,” Emden said. “We got tremendously better throughout the weekend and we had LMU on lockdown today.”

Emden said his transition been heavily influenced by veteran leadership from the team, which has been pivotal in his early success.

“Everyone has been supportive because at the end of the day we are all trying to make each other better,” Emden said. “We give feedback to one another and help out one another on both sides of the ball.”

The Waves will host Air Force at Raleigh Runnels Pool this upcoming weekend on Feb. 27, and will then travel to LMU on Feb. 28, the following day.