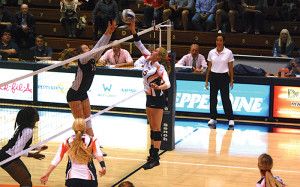 October was designated National Breast Cancer Month in 1984 in the order to spread awareness and educate people about the disease that kills one in every 36 women. This awareness campaign encourages women to get mammograms and be proactive about their health in order to prevent breast cancer deaths.

On Oct. 24, women’s volleyball sponsored a “Pink Out” game to raise awareness. Pepperdine Athletics is one of many organizations and professional teams to don pink this month to support the cause.

The Sacramento Kings wore pink cleats in a preseason victory over the Golden State Warriors. The Oregon Ducks decked out in Nike pink helmets and uniform accents in their crushing win over Washington State this month as well. In 2008, the pink wave reached Washington, D.C., as the White House was lit up in pink to demonstrate the administration’s support for the cause and finding a cure.

The Waves defeated Gonzaga Bulldogs in a close five-set game. The Bulldogs led 25-19 and 26-24 the first two sets, pressuring the Waves just enough to inspire the team to turn around and grab three consecutive wins, 25-22, 25-27, 15-13. Athletics Hall of Fame Coach Nina Matthies commended her team on their resilience and ability to bounce back for the win.

“Tonight I felt we finally dug in and fought back,” Matthies said. “With all the injuries and lineup changes, there really hasn’t been a lot of room to move. The pressure is really on the kids. Tonight, as a team, they stepped up and said, `We will win,’ after falling behind. They fought back, and they did.”

Pepperdine was missing two starting blockers and the starting libero. Freshmen Emma Fuzie and Reegan Dennis took the court and held up well against the competition. Freshman Gillian Bergeson played exceptional defense with 23 digs, while junior Katie Messing led the team with 20 kills.

The Waves wore pink ribbons in their hair while the Bulldogs wore pink socks. To further the Pink Out theme, cotton candy and Breast Cancer Pink shirts were sold at the game. Fans were encouraged to wear pink in the stands.

About one in eight women in the U.S. will develop breast cancer in their lifetime. While medicinal advancements are lowering the death rate, awareness is one of the key factors to an early diagnosis and lowe-risk case.

The game was a successful reminder of National Breast Cancer Awareness and a decisive Waves win. Pepperdine has a 27 home game winning streak against Gonzaga that dates to 1987.

Later in the weekend, the Waves defeated the Portland Pilots 3-1 in the Firestone Fieldhouse. Messing continued to lead the Waves in offense with 19 kills.

The team travels to Utah to face BYU on Nov. 2 at noon.

Attitude and branding of athletes are half the fun of spectator sports. The men’s basketball team debuted its 2013-14...
Copyright 2013 Jupiter Premium Magazine Theme
Back to top