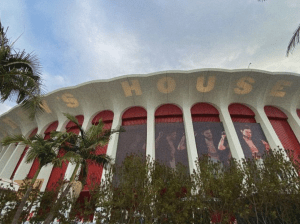 The Kia Forum in Inglewood, Calif., shines Harry Styles lights on the venue before “Harryween” on Oct. 31. Styles and his band dressed up as the cast of “Grease.” Photo by Beth Gonzales

For the first time ever, singer Harry Styles is performing 12 sold-out nights during his residency at L.A.’s Kia Forum in Inglewood, Calif. which will end Nov. 15. Styles kicked off his residency leg of “Love On Tour,” in August with two nights in Toronto and then played 15 nights at Madison Square Garden in New York City.

Styles is now in L.A., and many students are stopping by and taking their ultimate tour of “Harry’s House” on one or multiple days of his L.A. shows. Due to Styles’ unexpected illness, three shows Nov. 5, 6 and 7, have been postponed to January 2023.

“I love live music, and ‘Harry’s House’ the album is perfect, so being able to hear those songs in person was awesome,” junior Priscilla Gonzalez said. “He spreads the message of kindness, and it really showcases through his fans, and I think that is so special.”

Sophomore Lauren Brajevich said she has loved Styles since the days of One Direction, and when she attended the Oct. 28 show it was her first time seeing him perform live.

“He did not disappoint,” Brajevich said. “He was so much better in person than I even thought he was going to be. His outfit was amazing, and I went with my really good friends, and we have been so excited about this since July.”

Brajevich said her favorite song live was ballad “Love Of My Life,” and she recorded the entire song, with the audience shining their phone lights. She said she sent it to her mom — the love of her life.

For an artist to play so many live shows consecutively, Brajevich said each show feels different. She said Styles encourages the crowd to feel free to be whoever they want to be in the room, creating a certain positive energy.

“It does set the tone for everyone to be who they want to be, and everyone was so nice, complimenting each other’s outfits and just having a really good time,” Brajevich said.

Sophomore Jordan Solofa attended the Oct. 28 show and said she has admired Styles since his “X-Factor” audition in 2010. Her favorite song live was “What Makes You Beautiful.” She said her younger self was happy and the crowd knew every word.

“Harry Styles means love, inspiration and the ability to be unapologetically yourself,” Solofa said. “He creates a space for people to not be afraid to be themselves, whatever that looks like. I think his music has a level of realness to it, which as a fan, I can say is comforting and reaffirming to hear when you can relate.”

Senior Bella Jacobellis said she enjoys going multiple nights and anticipating what Styles will be wearing and admiring the high fashion of the crowd. Due to Styles’ influence, she said fashion seems to play a massive role in the overall experience.

Harry Lambert, British editorial and celebrity fashion stylist, styles Harry Styles, according to GQ. Styles recently released Gucci collection “HA HA HA” after a long partnership with Gucci and after breaking into the beauty world with his nail and skincare brand, “Pleasing.”

“It is fun to see everyone’s creativity and the way they express themselves through their outfits, and everyone feels so comfortable at his shows to be able to dress up and just have fun,” Jacobellis said.

Styles held his annual Halloween concert, “Harryween” in L.A. Last year for “Harryween” in New York Styles was Dorothy from “Wizard of OZ” and a clown. Gonzalez, who attended the show, said she has loved Styles since 2010 when he first started with One Direction. She said she has followed his career ever since.

“He has been a constant in my life for a decade now, and I have so many great memories associated with him, and I feel so attached to him,” Gonzalez said. “When I think of him, I think of all the great experiences that have come from him, the friends that I have met and places I have been.”

Gonzalez said there were many fun Halloween activities at the show such as face painting, carnival rides, tarot readings and more. Styles and his band dressed up as the cast of 1978 musical “Grease,” Styles was Danny Zuko and covered the song “Hopelessly Devoted To You.”

“‘Hopelessly Devoted To You’ was his best song live,” Jacobellis said. “He vocally sounded so good, and that is a tough song to sing, and he pulled it off so well. Every Harry fan in the audience who appreciates musical theatre died a little bit inside.”

Many students and fans alike are venturing out to Styles’ residency for multiple nights, and Jacobellis said, during every show, something different can happen. This can include his outfit, a fan interaction, the setlist or specific circumstances, such as famous online influencer, Chris Olsen, receiving recognition for his sign at “Harryween.”

“Every show is unique in its own little way, so I think if you can go [multiple nights] it is worth it,” Jacobellis said. “But, going to one show is also amazing, and Harry makes all of his shows special for everybody because he knows, for at least one person in the audience, it is their first time seeing him.”

Gonzalez said she attended “Harryween” alone and made new friends with people at the show — students said this attitude of camaraderie is due to Styles’ motto, “Treat People With Kindness.”

“He seems like such a genuinely good person, and he uses his platform generally for good — whether it’s having people register to vote at his concerts or advocating for gun control,” Jacobellis said. “I will continue to support him by listening to his music and advocating for good.”

Senior Gina Duhovic, who attended two nights of the L.A. shows, said she has been a fan since 2018, and this was her first time seeing him live. Duhovic said her favorite songs are “Daydreaming” and “Satellite,” and she enjoys them more now that she has heard them live.

“Harry Styles has been a big part of my life since I have been a fan, especially now and during COVID, his music has helped me through some things in my life, and I believe I will always be a fan,” Duhovic said.

Duhovic said she loved seeing everyone’s smiles, creativity and personalities shine through while attending a Harry Styles concert. While many go for the music, students said the experience ultimately made them feel safe — and most will be ready to see Styles live once more when he returns to the golden state.

“Overall, Harry just represents joy,” Gonzalez said. “The joy of growing up and girlhood — and I think that is so special.”