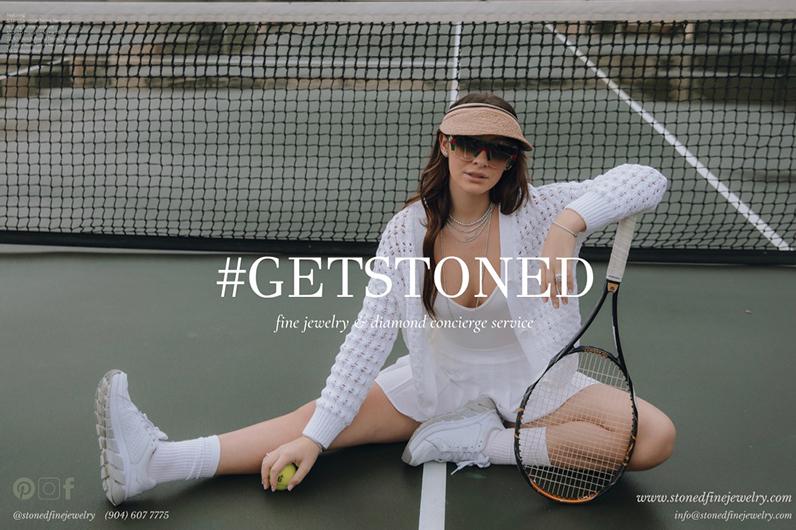 Jeweler Eve Gay poses for a promotional photo for her jewelry company STONED in Malibu in January. Gay said she developed the idea for her business in March when quarantine began and launched her company in November.

Senior International Management major Eve Gay said moving back to her hometown of Jacksonville, Fla., during the pandemic provided her the extra time and space she needed to focus on starting her own jewelry company.

After months of preparation, which included acquiring an LLC and completing legal paperwork, Gay launched STONED, a fine jewelry and diamond concierge service, in November.

While STONED allows customers to shop for custom luxury jewelry completely online, Gay has started providing jewelry to boutiques and trunk shows in the Jacksonville area. The business was also featured on the February 2021 cover of Playboy South Africa.

“The single female is kind of who’s dominating the market right now, where it used to be, like, you’d wait for your boyfriend or fiancé to buy you something,” Gay said. “We’re seeing a big shift and a lot of women are just buying it themselves. I think that’s really cool, and I want to be the person that’s there to help every step of the way.”

Gay said her interest in fashion started at a young age. She knew she wanted to work in the fashion industry upon graduation, but after an internship she acquired with a sustainable clothing designer fell through due to COVID-19, Gay pivoted her career interests toward jewelry and accessories.

“Fashion is a really saturated market, and it’s really hard to stick out,” Gay said. “I’ve always loved jewelry — usually I have all my jewelry on all the time, I never take it off — and I was like, ‘This is what I want to do.’”

Gay said creating a contactless jewelry business was important to her not only because of the pandemic but also because of the rise of online shopping, especially among younger adults.

“Brick and mortar stores are always going to be there,” Gay said. “But everyone is doing stuff online, especially our generation. Having a diamond concierge service on speed dial is a really big luxury that I want to be accessible to people all over and all ages.”

Gay said she drew inspiration from the online shop Ring Concierge, a woman-owned jewelry company that specializes in engagement rings, wedding bands and other luxury items. Gay said it was important for her to break into the traditionally male-dominated space of luxury jewelry to contribute a young woman’s mindset.

“I think they need a girl’s perspective, especially when I deal with guys and I do my concierge part, which is getting them the perfect gift,” Gay said. “If I see something, I’m like, ‘This is your girlfriend, I stalked her Instagram, or I know her or I know her friends.’ And then I package it, I write the cards and everything. It just makes it so seamless for them.”

Gay said relationship-building and creating connections with her clients is pertinent to STONED’s business model, which is centered around longevity.

“It’s a really special thing, getting your first piece of expensive jewelry,” Gay said. “My friend was my first customer, and it was so exciting for both of us. From then on, I’ll be the person if she wants to upgrade it or add more to her collection, and you just grow with those people over time. It’s really cool and kind of intimate.”

In addition to finding jewelry items for her clients’ personal collections and as gifts for their significant others, Gay said she wants STONED to expand into the realm of wedding jewelry and engagement rings.

“I was talking to some of the fraternities and I was like, ‘I want to come talk, even if it’s on Zoom, to the chapter, because if one boy gets engaged, I want to do that ring,'” Gay said.

On top of handling one-on-one interactions with clients and fulfilling orders, Gay also runs STONED’s website and social media accounts, where she said her goal is to create a cohesive aesthetic to attract customers and to interact with as many people as she can.

“My strategy is to engage with anyone and everyone,” Gay said. “I try to reach out and just kind of tell people about it; I DM people all the time. I have no shame. Even if it’s just through a screen, I’m putting myself out there.”

“I was just so overwhelmed, and I just felt so happy that I have all the support from people I don’t even know and that they wanted to help me out,” Gay said. “It was just the best feeling. I am still in shock.”

Next year, Gay has plans to attend the Gemological School of America in New York City to become a certified gemologist. With this degree, Gay said she can start cutting stones and making jewelry for STONED herself. In the future, Gay wants to continue to expand the brand and partner with more celebrities and influencers, with the hopes of STONED becoming a household name in luxury jewelry.

“I’m putting all my time and energy into it,” Gay said. “It’s so hard, but it’s so worth it. In a year from now, when I look at this time in my life, I think I’ll be really happy with the choices I made.”