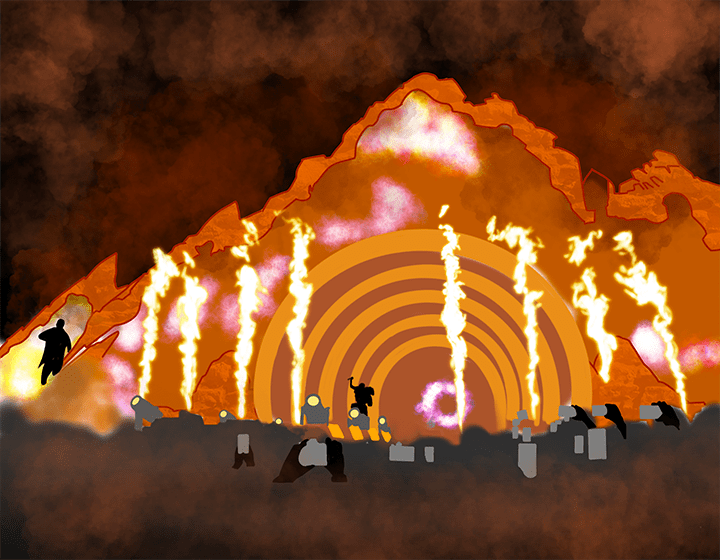 Editors Note: Some hyperlinks may contain graphic images or videos.

A large crowd of the estimated 50,000 attendees surged toward the front of the stage shortly after Scott began his set around 9 p.m., according to Houston Fire Department Chief Samuel Peña. Panic and injuries emerged in the audience as fans began to crush each other — some were left unconscious.

Pepperdine students join others in speaking on their reactions to event’s handlings.

“I feel like things were done poorly and the measures for the concert from the get go were inadequate,” first-year student Uba Obasi said. “Past instances [Scott] encouraged crazy mosh pit behavior so that’s usually the culture people in the crowd go by. Fans should also be responsible for their own actions and be aware of their surroundings as well despite that.”

“In the days to come we’ll hear more about their stories, their dreams and what they hoped to accomplish in life,” Harris County Judge Lina Hidalgo wrote on Twitter. “To the parents, family members, and friends with a gaping hole in their hearts today, on behalf of the people of Harris County, we are with you.”

Peña declared a mass casualty incident around 9:40 p.m., Nov. 5 after an ambulance made its way through the crowd. Of the hundreds injured, 25 needed to be hospitalized.

The youngest confirmed was 9-year-old Blount, who died from sustained injuries over a week after the event.

“His condition hasn’t really changed, he still has the injured organs, heart, liver, the lungs, the brain,” Blount’s grandfather Bernon Blount told KHOU 11 Tuesday. “And right now, we’re just waiting to see what plan, course of action the doctors are going to take as far as trying to heal him and help him.”

Scott faces major backlash for continuing to perform despite the fatalities occurring during his set. Videos flooded social media of attendees screaming, “Stop the show,” paramedics giving CPR and the crowd assisting an unconscious fan as Scott watches and still sings from above.

“From what I’ve heard and read about, it seems like [Scott] didn’t handle it well at all throughout the whole ordeal,” first-year student JJ Krasnick said. “There were instances where it felt like he could’ve been able to see what was happening and he didn’t do anything. He also should’ve probably had more security as well.”

Although, there are videos that show Scott stopping the concert at one moment — he noticed an unconscious fan in the crowd and called out for security’s help.

“Somebody passed out right here,” Scott said during the concert. “Everybody just back up. Security, somebody help, jump in real quick.”

However, Scott continued to perform right after. Scott resumed his show until it ended at 10:10 p.m. — 30 minutes after Peña declared the mass casualty event.

“The artist has the command of that crowd,” Peña told NBC’s Today show. “The artist, if he notices something that’s going on, he can certainly pause that performance, turn on the lights and say, ‘Hey, we’re not going to continue until this thing is resolved.'”

There are also earlier videos online that shows a crowd rush of people breaking through the festival gate, crushing each other.

The morning after the concert, Scott issued a written statement concerning the tragedy on Twitter. Later that same day, he posted a video statement on Instagram.

“I just wanna send out prayers to the ones that were lost last night,” Scott said in the Instagram video. “I’m honestly devastated. Imma do everything I can to keep you guys updated.”

Several lawsuits have since hit Scott regarding the situation. Blount’s family is suing Scott and concert promoters for “failing in their duty to protect the health, safety, and lives of those in attendance at the concert,” according to the lawsuit.

“This young child and his family will face life-altering trauma from this day forward, a reality that nobody expects when they buy concert tickets,” said Benjamin Crump, the family’s lawyer in a Hollywood Reporter statement. “Concerts and music festivals such as this are meant to be a safe place for people of all ages to enjoy music in a controlled environment. None of that was true about the Astroworld Festival.”

Texas attorney Thomas J. Henry also filed a lawsuit on behalf of a victim against Scott, along with Live Nation, NRG Stadium and rapper Drake, who was a special guest performer.

“Live musical performances are meant to inspire catharsis, not tragedy,” Henry told ABC News. “Many of these concertgoers were looking forward to this event for months, and they deserved a safe environment in which to have fun and enjoy the evening. Instead, their night was one of fear, injury and death.”