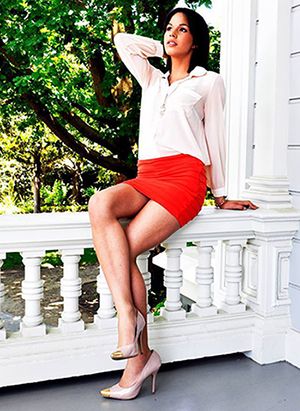 Bruce Weber, known for his work on ad campaigns for Ralph Lauren and Calvin Klein, shot the photographs in New York City. The black and white photos are clearly fashion focused, but the expressions of the transgender models give the images of strength and complexity.

The National Center for Transgender Equality and the LGBT (Lesbian, Gay, Bisexual, and Transgender) Community Center support the campaign to break down stereotypes and educate the populous with diverse and individualized stories. By bringing the issue down to a more personal level, this opens up dialogue among Americans that open up doors of opportunity and create a clear understanding of the uniqueness of every human being.

Erin Sommer Tenorio, a former Pepperdine student who is transgender, commented on Barneys’ new campaign: “It’s really cool. I like how it shows the different aspects of models. It normalizes it all.”

As a transgendered person, she struggled with the discrimination and bullying she experienced at Pepperdine. “People would message me about how they disapproved of my lifestyle or that I’m going to hell.”

Tenorio says even the university’s administration created an isolating experience. Transsexuals who wish to live on campus are forced into single dorms or in a double room alone. Most are put in George Page. “You have to pay more for an apartment because you cannot have a roommate. It feels lonely and you are literally cut off from everything,” Tenorio said.

According to the Dean of Student Affairs, Mark Davis, each student’s experience is unique so they work with the student to make “appropriate changes” to campus housing. Under Pepperdine’s discrimination and harassment policy, transgender students are covered, but how much? The discrimination, harassment, and sexual misconduct policy states: “All members of our community are created in the image of God and therefore should be treated with dignity and respect…we respect the inherent worth of each member of the community and do not engage in any forms of harassment.”

However, Pepperdine does offer the Vinci and Ellsworthe Endowed Scholarship for any Seaver student with financial need who has demonstrated a commitment to the health and wellness of the lesbian, gay, bisexual and transgendered community.
Still, the university has refused to grant official status to ReachOUT, an LGBT club, as an official club. Students supporting ReachOUT have even filed a petition to gain an official status, but ultimately were unsuccessful.

Expanding the scope of the donation program to include online participation provides an opportunity for all Americans to reach out and shop for a cause. Any excuse to shop is a good excuse.

There is no LGBT club at Seaver College, which leaves students where, exactly? The fight for human rights should not be limited to religion, race and ethnicity. Without an open forum for at the very least discussion, the student body will be left uneducated.
Tenorio lends some advice to those who are transgendered at Pepperdine: “Don’t tell just anyone. There are a lot of closed-minded people. Don’t be ashamed, just be careful who you share with.”

Also, for those who are unsure how to act around their transgendered peers, Tenorio’s No. 1 rule is don’t ask about surgery.

“It’s rude. Not everyone is born the same way. Everyone has a flaw or something they don’t like about themselves. It’s not something you can help.”

“Photographers are usually very creative and artsy people and they even encourage transgendered models because of their strong features,” Tenorio said.

Pepperdine should follow Barneys’ example. Let’s talk about transgendered individuals. Let’s welcome them with open arms and share their stories. Just like with anyone’s life story, there is a lesson to be learned.