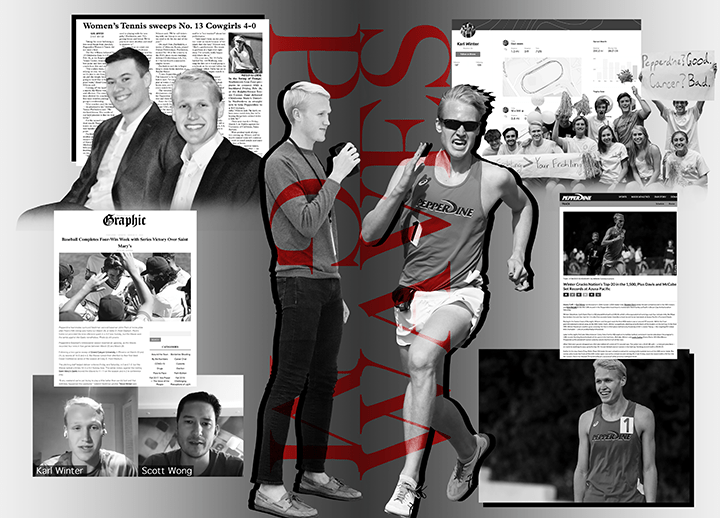 Among other titles, I am a Pepperdine undergraduate student, Pepperdine student-athlete, Pepperdine Athletics employee and Graphic student journalist.

Anytime I write a story for the Sports section of the Graphic, I grapple with the journalistic integrity of reporting on the successes and failures of my fellow student-athletes.

I would like to portray the school, athletic department and friends whom I love in the best possible light, but, as an aspiring journalist, I also must be true to my duty of seeking truth and accurately reporting the facts, no matter how unsavory.

Occasionally, the athletic department is not thrilled about what I write, and I do not want to jeopardize my relationships with the leadership of Pepperdine Athletics.

Kyle Cajero, communication graduate assistant for Pepperdine Athletics, has also been a student-athlete and Graphic writer, though not at the same time.

“While it is probably not the best, ethics-wise, to be a student-athlete and to also be a fan and also cover the sport, the flip side to that is that you genuinely care about everyone that you’re covering,” Cajero said.

This balancing act is unique to the experience of a student journalist in sports.

As part of its editorial policy, Pepperdine Graphic Media does not allow affiliation with the Student Government Association, but this policy does not bar athletes from joining PGM because athletics does not fall under the press’ role as a watchdog of the government. Other than SGA, the Graphic’s policies do not prevent its members from being a part of other student groups and organizations, but we exercise caution when covering things near and dear to our own hearts.

If a story pitch relates to my own team, I don’t write it; someone else on the Graphic’s staff takes it. In fact, we rarely use our own staff as sources on any story — this one is an exception.

But those basic rules are the easy part.

The difficult part is when my sources and subjects are my friends, classmates and fellow student-athletes, who sometimes share information that may not be fit to print. They may say something vulgar, share health issues of teammates or share information that would likely get them into hot water with the athletic department — things they would not say on the record if we were not friends.

Senior Sports Editor Paxton Ritchey, who also works for the athletic department as part of the video crew, said he occasionally feels obligated to tell a friend when a question is for a story or “just for me.”

“It’s a weird dynamic,” Ritchey said. “The way you text somebody, or email somebody, professionally versus just casually texting your friends is so different. It’s really weird to go through my texts and realize that I’ve switched back and forth.”

When I text a fellow student-athlete and friend for the inside scoop on a team, I too often tell them outright whether I’m asking for myself or for a potential story. I also occasionally have to tell them I cannot grant them anonymity for telling me trivial inside information. For example, telling me who’s pitching tomorrow might help me do my job, but it does not reach any journalist’s standard for granting anonymity.

Staff Writer Calvin Wood is in the rare position of exclusively covering his former teammates, who he said are good at “flipping the switch” between friend and source.

After three years of playing for Pepperdine Baseball, Wood joined the Graphic to cover the team. Wood said he garnered “snickers” when he first interviewed his friends on the team.

“They think it’s funny, but as soon as I ask a question to them — they’ve been asked all those questions before, so they know how to handle it,” Wood said.

At its core, journalism is about storytelling and building relationships, and in that sense, being a student journalist in sports is not so different from professional journalism. We do not necessarily need to separate our work from our casual relationships and friendships because relationships and trust are part of the work.

“As long as you build trust with people, and not break that, then sure, it maybe could lead to an awkward conversation where you do have to clarify, ‘Can I use this for a story?'” Cajero said. “Or, ‘Can I use this information at all?’ But generally, that’s better than not doing that.”

Wood, Cajero and I also can easily relate to our interviewees because we share, or shared, their college experience of being a student-athlete. Often, they’ll be kind enough to ask me about my own season and training before I can ask them about theirs.

“No cheering in the press box” is a cardinal rule of sports journalism, and while we avoid literally cheering when covering a competition, there is no doubt which team we root for.

Sports are often emotional, especially when you want your friends and fellow Waves to succeed.

“I had such a hard time with that, just because, at the end of the day, you’re all on the same team,” Cajero said. “It’s more fun to cover a winning game than a losing game.”

Cajero and I have covered high school sports, where you cannot point out mistakes or errors since the subjects are children, but Division I athletics is a new ballgame. Collegiate coaches and student-athletes at the collegiate level are not afraid to identify points of struggle and needs for improvement, which helps us write the story after a loss without pointing out mistakes ourselves.

“It would make no sense, logically speaking, to lambaste your own team and then have to cover them day in and day out,” Cajero said.

Since we do cover the same teams, coaches and student-athletes throughout our time in school, student journalists toe the line between asking tough questions and being lenient for their own school.

We are not the athletic department itself, which does not speak to coaches and players at all after a loss, but we are also not a national media outlet without any personal connection to the student-athletes.

We know the pain of a poor performance, a gut-wrenching loss or a season or career coming to an end, and we must put it aside for the interviews.

“In a lot of ways, it would be easier to just go to some random school or random team and cover them because you don’t have the same investment in your school,” Ritchey said. “It really is a business at that point. We have to do a lot more masking of emotions than those seasoned industry professionals.”

In a way, these emotions improve the story. We must allow them to show through the sources, but sharing them as a fan can allow us to better convey the story.

We are just that — student journalists. We are still studying and learning to do our jobs by trial and error. But what does that mean for a coach or athlete? Do they respect our work less because we are not professionals?

“Youth is a pretty big obstacle for people to overcome,” Cajero said. “Especially within your first five or six years as a journalist, and I haven’t gotten there yet. It is so hard for younger people to get some of these more esteemed and older coaches on the record.”

For example, Duke Men’s Basketball Head Coach Mike Krzyzewski gave a snarky response to a question from a student journalist after a loss, refusing to put the loss in perspective.

Thankfully, the head coaches at Pepperdine give us the time of day and more. The coaches are generally personable and receptive, perhaps because the Graphic is often the only outlet covering their team.

Head Coaches Scott Wong and Kristen Dowling said they and their athletes read the stories we write about their teams and other stories. I trust that they’re being honest because I’ve built a rapport with each of them throughout my time covering their teams, and I am confident my work reflects their teams well.

“I think they appreciate that they’re being written about and I think it informs the school — the rest of the student body, who maybe doesn’t know,” Dowling said. “It absolutely adds value.”

Though I’ll likely never know as much about volleyball as Wong, he answers my questions in ways that balance volleyball jargon with digestible information.

Ritchey said he wants the coaches to know he puts a lot of thought into his questions, so they will do the same in their answers.

“You show your knowledge in the question,” Wong said. “That gives you a little bit more credibility.”

Wong and Dowling said they’ve never been trained to avoid certain topics with the media other than personal information, but Wong said he tries to keep his interviews positive.

“I’d never want to humiliate any one of our players,” Wong said. “I always want to highlight the players that are really doing some great things.”

Dowling also said she tries to stay “even-keel” after wins or losses rather than getting too emotional about either. That eternal optimism means we sometimes navigate cliches, but that’s true of all journalism.

If they respect our work, the Pepperdine coaches and student-athletes are much more likely to give us meaningful quotes. The student-athletes can often relate to us more effectively than the coaches because they too are learning and growing during a formative time in our lives.

“We’re allowed to have relationships with the people that we’re growing up alongside,” Ritchey said.