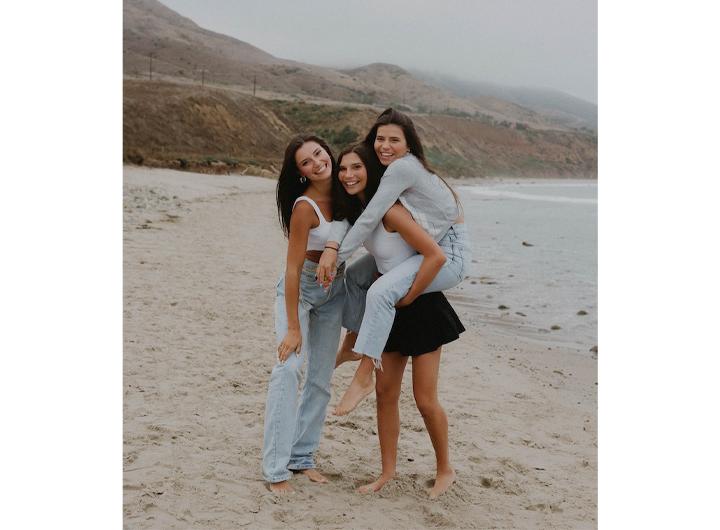 The Pitman sisters, Hasley (left), Hope (middle) and Halle (right), smile at Leo Carrillo State Beach in Malibu in June. Hasley Pitman, who is a 1L at Caruso School of Law, said learning TikTok dances together has caused the sisters to grow and bond.

After COVID-19 sent her back home to Jacksonville, Fla., 23-year-old Hasley Pitman — a first-year, or 1L, at Pepperdine Caruso School of Law — went viral on TikTok with her two teenage sisters, Hope and Halle.

Stuck at home together, Hasley Pitman said their mom suggested they make TikToks because it would be fun. The Pitman sisters have now amassed 2.3 million followers with their trendy dancing videos. Their most viewed TikTok, with nearly 45 million views, is a sponsored video for the nail polish company Essie.

As COVID-19 left the world at home, people looked for a way to pass the time. Like the Pitman sisters, they turned to TikTok for community and entertainment, as the app allowed people to be creative and engage with others.

TikTok launched in 2016 but grew in popularity in the past year. In September, there was a 75% increase in TikTok users in the United States since the start of 2020, according to a Forbes article.

“It really was just kind of like this diamond in the rough when really the world was struggling,” Hasley Pitman said.

While in quarantine, some resorted to TikTok for dancing trends, recipes or the chance to go viral. Like many other social media apps, however, there are downsides, including negative comments and addiction.

The Spread of TikTok

In 2020, TikTok’s user growth in the United States was over 85%. TikTok now has over 800 million users globally, according to the European Journal of Cultural Studies in July 2020. A Pepp Post poll of 63 students in March, which skewed female, found that 90% like TikTok, and nearly 60% said it was the social media app they use the most.

Public Relations Assistant Professor Klive Oh said he attributes TikTok’s growth in the past year to its familiar yet new use of videos, to people having more free time being at home and to an increase of influencers on the app.

“Although it was unfortunate that we had faced COVID for most of 2020, what that meant was people were home and they didn’t have anything to do really to sort of spend time, enjoy themselves,” Oh said. “TikTok was a great tool to do that, because in the home, you can create content still that would be enjoyable to watch, that would catch on, that could go viral.”

Oh said the brevity of TikTok videos increases the potential for someone to go viral. The poll found that over 20% of students’ favorite thing about the app is having a 15 to 60 second time limit on videos, while over 19% of students said it’s their least favorite thing.

While Twitter has this same potential for influencers to go viral, Oh said TikTok is more mainstream and the cultures are different.

“What they did was they allowed for more collaboration among and with influencers and larger organizations, like companies, or when there were big events and things like that,” Oh said.

The app’s algorithm has control over the videos that have gone viral which he said makes them even more popular, receiving more views.

TikTok Creators in the Pandemic

“Quarantine happened, and it was like a full-fledged obsession almost for me for a little bit,” Coates said. “There wasn’t much going on and it felt like a way to create content that was interesting and quick to do and didn’t take a lot of thought.”

Coates said her favorite thing about TikTok is that compared to other social media platforms, TikTok gives everyone an equal opportunity to go viral because the algorithm can place one’s content on anyone’s page.

First-year Biology major Harleen Kaur Bal downloaded TikTok at the start of COVID-19 because she said she was bored and the app was popular. Bal posts TikTok videos pertaining to her Punjabi culture. Her first viral video, with over 28,000 views, was a comedic video about the Farmers’ Protest in India.

“I never thought I would get TikTok or download it,” Bal said. “In fact I was kind of almost against it, and I joke with family or friends who had it that it was a waste of their time.”

Maddi Winter, a junior Screen Arts major, first went viral in 2016 after posting a video with her bunny in her basement that has reached over 365,000 views.

Since then, Winter moved to creating animated dance videos — that reach over 2 million views — using Adobe After Effects, which she said she learned on her own through YouTube tutorials. She said she was always interested in becoming an influencer and currently has over 4 million followers on TikTok.

“The outpouring of support and stuff that I get from my comments every day is a big reason why I’ve stayed on [TikTok] for five years now,” Winter said.

COVID-19 allowed her to create more content because she said she is stuck in her apartment. Winter said she usually takes about 30 hours to edit her videos, but one of her most recent videos, with over 24 million views, took her over 60 hours to edit.

Recently, Winter collaborated with Kevin Chamberlin, who played Bertram on the Disney Channel show “Jessie.” When Chamberlin first joined TikTok, Winter said she commented on his video without thinking anything of it. But one month later, he DM’d her with an idea for a collaboration. They made two animated dancing videos: one with over 2 million views to the show’s theme song on Winter’s account and one with over 3 million views on Chamberlin’s account.

“Oh my God, it was so unreal,” Winter said. “These kind of people that you grow up watching, you never expect to see them in real life.”

As some student creators went viral during the pandemic, many new trends on the app also went viral and became known as “quarantine trends.”

While at home, many users created challenges or trends and some student creators took part in these trends. This included making food and drinks such as whipped coffee, baked feta cheese pasta and cloud cake. Some users choreographed dancing videos to songs including “Blinding Lights” and “Toosie Slide.” Coates said she tried the cloud cake but was not a fan of it, and Winter said she did the “Supalonely” dance last year.

The poll found that more than 64% of students have participated in some of the trends.

Toxicity Spreading on the App and TikTok Addiction

While the app has many positive benefits, there are also negative ones as most creators face hate comments from other users.

“It’s kind of making younger kids, I think, feel like it’s OK to be a mean person when it’s not,” Winter said.

Hope Pitman said she likes that TikTok is diverse and allows opportunities for anyone to build a platform. However, she said sometimes people are quick to comment negatively or write harsh things on others’ posts.

“I think people need to take a step back sometimes to be like ‘Wait, when I comment on something it’s actually going to this person like not just to other people,'” Hope Pitman said.

Some viewers are also addicted to the app. When influencers do not post videos every day, some TikTok users flood their comments asking why they have not recently posted. Halle Pitman said it is important for her sisters and her to sometimes take a break from social media and hopes others will understand.

“It’s important to not always be on social media for your mental health and your physical health,” Halle Pitman said.

She said her and her sisters care about their followers but sometimes they need to take a step back.

The Future of TikTok and its Creators

As the app continues to grow, Hasley Pitman said they are continuing TikTok for now. She said she is hopefully moving to Los Angeles by the end of the summer and, if they all move to Los Angeles in the future, they will continue this TikTok journey together in the future.

Bal and Coates also see themselves continuing to create content in the near future.

“People nowadays do get tired of things rather quickly,” Oh said. “I think TikTok’s enjoyed success in that [it] shifted from just games and fun to now it’s educational.”

Great Books Associate Professor Tuan Hoang posts dancing videos and other videos on Facebook, Instagram and YouTube. While Hoang does not use TikTok, he said his own dancing led him to add a fun assignment to his great books and Humanities 111 classes incorporating TikTok. The students have a variety of options to choose from and some students have made TikToks.

With the positive and negative effects of TikTok, student creators said they want their audience to be entertained.

“I just think it’s crazy to see the impact we can have,” Hasley Pitman said. “And I think that’s why we do try to stay so positive and just bring a smile to people’s faces, because we are having an influence and if we can bring a positive influence, I think that’s even better.”