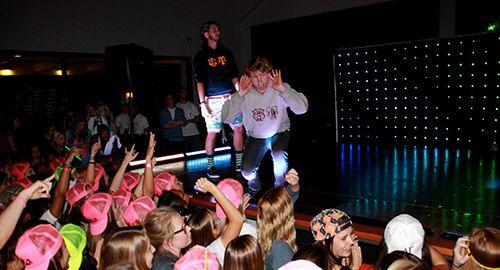 Steal the thunder­­ — Psi Upsilon member junior Chris Perry hypes up the crowd during the fraternity’s annual philanthropy event, Psi U Think You Can Dance. The fraternity discovered their money safe containing $2,000 had been stolen, the proceeds of which would have gone to a paralysis foundation. (Photo by Katrina Kirsch)

While the Psi Upsilon fraternity celebrated the success of their annual Psi U Think You Can Dance philanthropy event in the Caf on Thursday, Jan. 16, a theft occurred that shocked all the members, according to Psi U President senior Jack Sherrer.

As the members were cleaning up from the event, a Psi U member realized the money safe was missing. It had been placed backstage with the members backpacks and personal belongings. According to the DPS report, $2000 was reported missing. There is now an ongoing investigation.

“It was a slap in the face,” Psi U member junior Jordan Seah said.

Philanthropy Chair, junior Dominic House said they filed a report with DPS. A security camera is located in the Caf, but according to House, DPS said it wouldn’t have seen anything, due to the dark room and flashing stage lights.

“It’s very bizarre,” Sherrer said about the incident, and used this circumstance as a reality check to the prospect of theft on campus.

The annual event is always anticipated by students on campus since it resembles the acclaimed “So You Think You Can Dance?” television show. Members of Psi U had been tabling throughout the week, selling T-shirts and tickets. Sherrer said non-Greek attendance usually parallels Greek attendance, as they try to “put on an event that everyone can come to.”

According to Sherrer, this year fulfilled that and members agreed it was the most successful and energetic PUTYCD to date. All eight sororities participated in the dance competition, and some even created original soundtracks to raise awareness and show their support for their respective foundations.

Despite the theft, Psi U was still able to collect approximately $4,000 through alumni donations, as well as T-shirt and ticket sales. All of the proceeds will go to the Sam Schmidt Paralysis Foundation, named after one of the founding fathers of the Lamba Omega Sigma fraternity, now known as Psi Upsilon. DPS declined to comment.