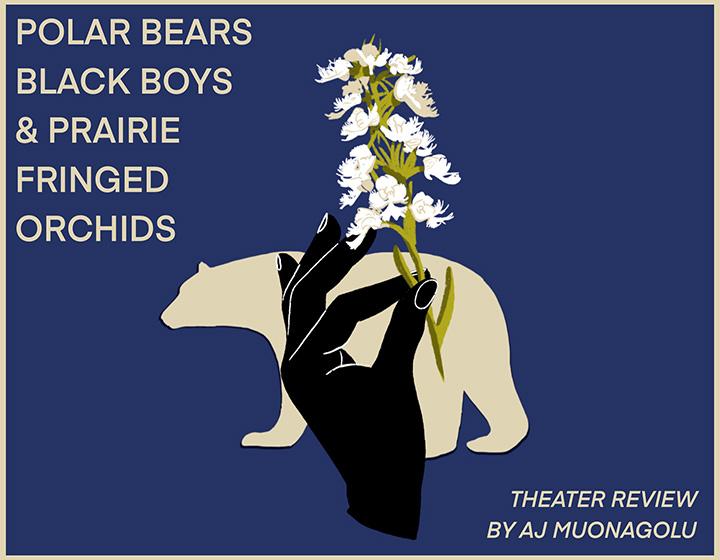 Even during a pandemic, the curtains will never fall on the Pepperdine Theatre Department, and this time its creativity shows the world multiple perspectives about how to value a Black life.

Directed by Theater Professor Nic Few, “Polar Bears, Black Boys & Prairie Fringed Orchids” performed Oct. 1–3 on Zoom. The setting plays out in the Harlem, New York brownstone of Peter and Molly, who host a cocktail party for Black Lives Matter activist Jaquan, his partner Tom, fellow “sistah” and bookstore owner Shameka and Rita, a mother who has lost her son. What starts off as a discussion on microaggressions turns into a bigger commentary on what it means to be Black and how to get American society to value a Black life just as much as an endangered species.

“I was just in heaven watching the performance,” said original playwright Vincent Turwell Durham during a virtual talkback with the cast. “Everything was spectacular!”

Pepperdine’s production of “Polar Bears, Black Boys & Prairie Fringed Orchids” has a great story and a superb cast, showcasing technical skills that can only be cultivated during a pandemic.

Sophomore Sam Brock and senior Indiana Wilson play married couple Peter and Molly who have a son named Jason. Wilson does an amazing job depicting Molly’s drive to be anti-racist and sensitive to Black issues but also shows a side of her that sometimes puts too much emphasis on all life instead of the current lives in danger.

Brock delivers a very convincing portrayal of a man who has racist tendencies and a general distrust of the BLM movement. Peter remains somewhat hospitable with his guests and even tries using the language his wife tells him to use to refer to Black individuals. Despite his initial racial insensitivities, he still manages to bond with his guests through music and listen to their points of view. Brock is unafraid to play a complex and antagonist-like character, but he combines comedic elements and shows to the audience everyone can find a way to communicate even on sensitive topics.

Shameka, played by junior Karese Frizell, is a Black woman who owns a bookstore that Molly frequently visits. Shameka believes she will attend a cocktail party and meet a handsome man, but she lands into a discussion on how Black individuals are belittled. She talks about how Hollywood portrays Black women like her grandmother in “It’s a Wonderful Life.” Also, she opens Molly’s eyes to her own bias since it never crossed her mind that the owner of the bookstore was Shameka. Frizell brings Shameka to life with her own flair and charisma that cannot be replicated by anyone else on or off stage.

Some people, like Peter, believe that BLM activists are overaggressive and ready to riot, but Jaquan, played by senior George Preston, is quite reserved throughout the party. Jaquan makes his arguments and his discussions more palatable to other audiences by using the term “implicit bias” instead of racism. However, the reserved nature of Jaquan breaks after being accused of not being Black enough. Preston brings passion, resilience and power as he speaks about how being Black isn’t just about giving talking points and fighting but living and facing discrimination with Black skin.

While the audience originally thought Tom was Jaquan’s plus one, he is reintroduced as Jaquan’s partner. Tom also advocates for Black issues but still has his own, including addiction. He is sometimes the source of the tension, especially when he spouts the notion that Black people should be on the endangered species list to keep them from being mistreated.

Tom is a complex character, and the climax follows right after Tom breaks his sobriety by drinking a cocktail. Senior Britain Hope has unmatched emotional depth, depicting Tom’s sadness, regret, energy and passion — sometimes all in one scene.

Finally, there is Rita, who lost her son Elijah — played by junior KJ Powell — after he was shot by a police officer. While in mourning, she arrives last to the party and uses her personal experience to lower rising tensions. She is the only Black person at the party who seemingly agrees with putting Black people on the endangered species list. As a mother, she conveys that if her son was on that list she could have seen him again. She can appreciate how Molly tries to help and keeps everyone together through her personal narrative.

Sophomore Jada Henry’s kind and openhearted demeanor springs to life in Rita and allows the characters and the audience to bring their emotional walls down.

The cast and the characters all have emotions and stories that link together to create an unforgettable performance; however, knowing how it’s all put together is what makes it a true masterpiece.

With any online format, there are always kinks, but that didn’t stop these actors. During the Friday performance, the actors incorporated an amazing improvised transition when Frizell experienced WiFi issues. Despite a screen appearing frozen, the improv feels natural and doesn’t slow the pace of the play.

Some tech issues are more hidden. On stage, students can see and react in real-time, but online, the actors had to preemptively react so the audience could see it as if it was happening right after they finished their line. It takes tremendous work and dedication to be that precise, and none of it went unnoticed.

Overall, this play was a conversation between different people with their own subset of experiences and opinions. Brock, Preston, Frizell, Hope, Henry and Wilson step into their characters and become vulnerable. In doing so, they create an authentic demonstration of why talking about these issues is important, how to talk about them and how to find a common ground.

With an emotionally driven storyline, a professional and passionate cast and a national topic of intrigue, “Polar Bears, Black Boys & Prairie Fringed Orchids” provokes others to have a conversation about the worth of Black lives and how we can all come together to understand each other.

The Pepperdine Theatre Department may have called it curtains for this performance, but their masterful performances have cultivated an undying dialogue.