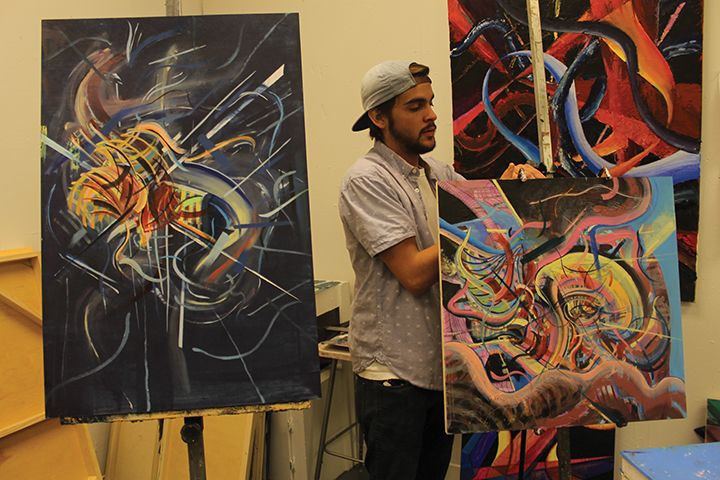 Where on campus can you see colorful abstract paintings, unique mosaics and sculptures of thrifted objects? All of these can be found at the Weisman Museum on campus, which will host the grand opening of the Fragments: Studio Art Thesis Exhibition starting April 16 at 5 p.m. to display the cumulation of senior art major’s work.

This year, artists Nic Alvarado-Rico, Katie Chambers, Louis P DeLaura III, Clay Gustafson and Laura Worden will have works included. Four years of school and countless projects all lead up to one final assignment before you can receive your hard-earned diploma; your thesis. Depending on your major, this could mean writing a paper anywhere from 25-65 pages long and above. However, at the end of the day, your fellow student doesn’t often see the evidence of this hard work.

The senior thesis for an art student is a bit different. Each art student created a number of works to be displayed in the museum on campus for viewing and critique. Being a lesser populated major, each artist is given a wall in the museum for their work. The idea is to create and display works that personify both your one’s personal style and message with the knowledge and skills learned in their classes over the years.

Three students comment on their inspirations and the statements their art makes. 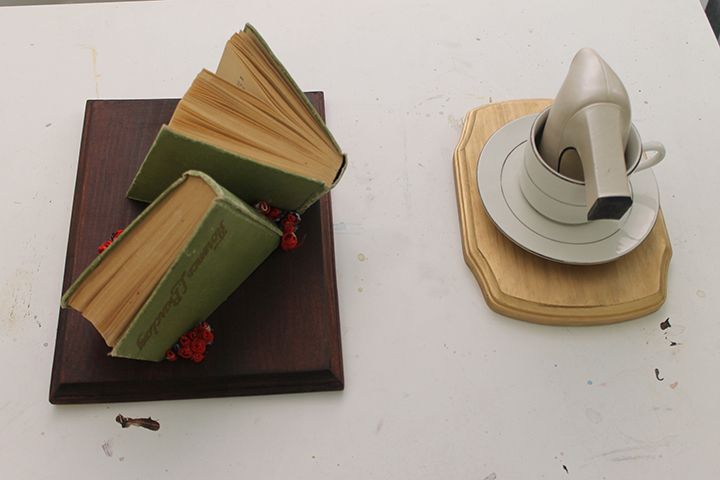 Worden began art as a child when her parents signed her up for art camp. She was inspired to pursue art after studying abroad in Germany. Her primary mediums are watercolors as well as mosaics and sculptures made from found objects.

“I was thinking about the differences and commonalities between the Abrahamic faiths such as Christianity, Judaism and Islam,” Worden said. Her greatest inspiration is contemporary artist Faig Ahmed, who makes traditional rugs from the Middle East and distorts them, imposing an ultra photoshopped geometric design.

After she graduates, Woden will participate in the Israel Internship with the Glazer Institute. She will work with the Israel Antiquities Authority’s conservation team to preserve the Dead Sea Scrolls as well as an archaeology project in the city of David. She will later apply to graduate school for art history.

“I see art as a form of advocacy,” Worden said. “There are things in this world that are awesome and worth celebrating, but there are also things that need to be changed, and I think that being an artist gives you the ability to make a statement.” 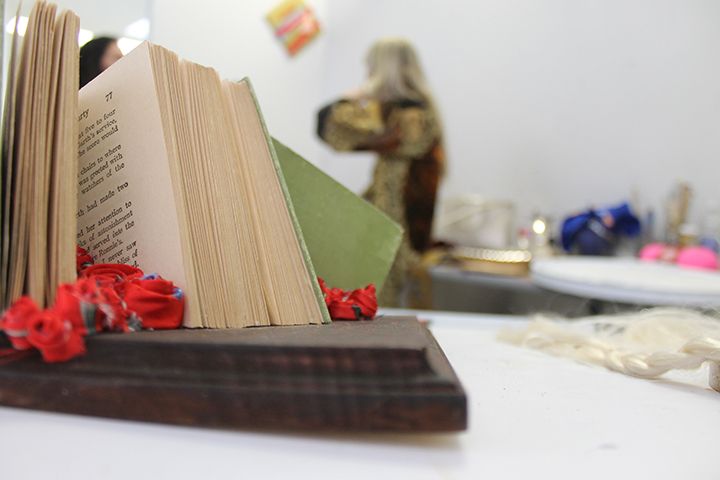 Clay Gustafson said he has been making art since he could hold a crayon, but has only been pursuing it professionally for a year and a half. He realized his desire to become an artist after discovering he didn’t want to work in a corporate office.

“I feel that I am talented enough to support myself, so why not do something that you love every day?” Gustafson said. He draws inspiration from early and contemporary abstract artists such as Mark Rothko, Wassily Kandinsky and Iva Gueorgueva. Gustafson uses a base layer of acrylic paint with layers of oil paint on top to create his artworks. He chooses highly saturated colors which he juxtaposes with a gaudy color palate one might find in an older home. His abstract works include a variety of lines as well as organic, biomorphic shapes.

Gustafson is often inspired by the universe, including color combinations seen in galaxies.

“The human race will never be able to fully explore the expanses of the universe, so it’s a great metaphor for the perfect uncertainty, or the ideal unknown,” he said. Gustafson’s ultimate goal is to increase self discovery and reflection on one’s beliefs “Once you accept that we cannot know everything, you begin to look at the world differently and question why you believe the things that you believe.”

After graduation Gustafson intends to begin an online business selling his art on digital prints, posters and iPhone cases. The art will consist of famous Renaissance paintings, which he will digitally change, turning them into their essential forms in a still recognizable way, thus combining traditional Renaissance art with postmodernist style. 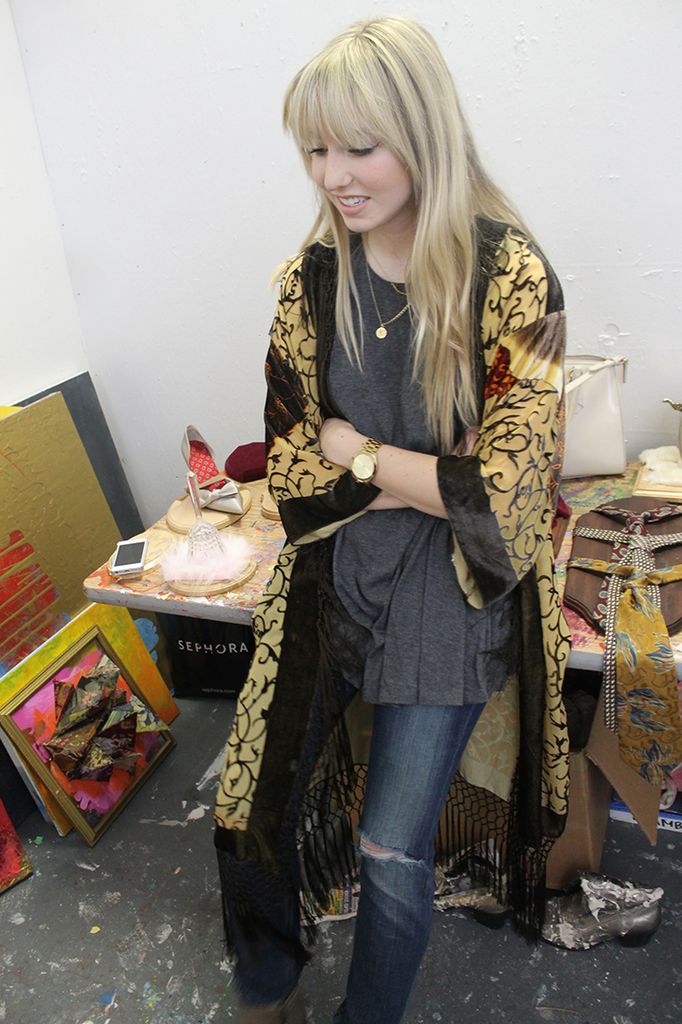 Chambers switched to the art major after deciding that the corporate world of advertising wasn’t for her during her sophomore year. She said she is inspired by artist Gustav Klimt because, “He is as obsessed with the color gold as I am.” However, she tends to find her inspiration from society’s downfalls and triumphs. She pays special attention to class structure, which she views as both interesting and a bit corrupt.

Chambers creates 3D sculptures on plaques, which are a critique on upper class society and are made of thrifted objects that are associated with wealth.

“I’m attacking the ambiguity and uncertainty of the other half of people’s lives,” she said. Her commentary on the upper class society takes both a direct as well as a symbolic approach. “I display half of an object, and it’s shiny, but you can’t see what’s happening on the other side. I use plaques, which are usually used for celebration of achievement and pushing them past that point and into questioning.” Chambers said.

After graduation, Chambers will attend Parsons in New York for graduate school and plans to begin her own line of handbags soon.

“I want to fill my brain with as much schooling and education as I can first,” she said. “After that I might show my art for a while, but I intend on branching out into the world where art meets fashion.

“Fragments: Studio Art Thesis Exhibition” grand opening is Thursday, April 16, at 5 p.m. The artists will be there to discuss their work. Food and refreshments will be provided. The artwork will remain in the museum, on display until May 2. 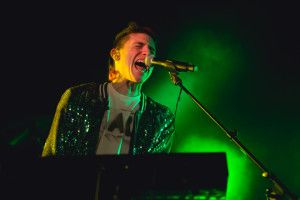 Photos by Matt Benton The alternative hit band, Walk The Moon stopped in LA at the Hollywood Palladium this past Thursday...
Copyright 2013 Jupiter Premium Magazine Theme
Back to top