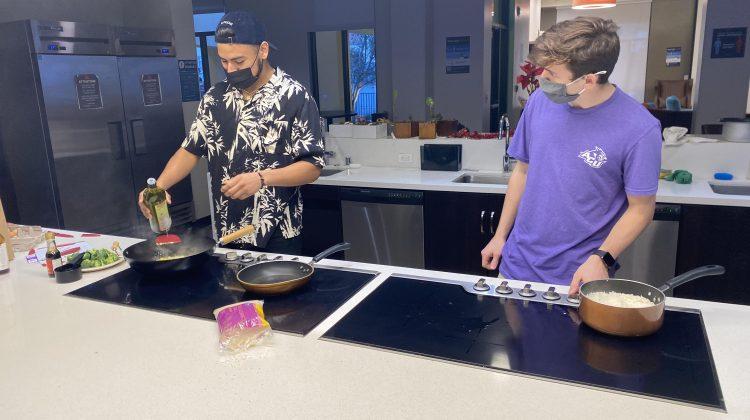 Sophomores Brishen Williamson and Jesus Bautistain cook a meal together in the Seaside kitchen. Students have used the kitchen and other personal kitchens to make their own food. Photo by Joseph Heinemann

There are many on-campus housing options, but for students who choose to live in traditional residence halls like the first-year dorms, Seaside or Towers, cooking on campus is a lot harder than it sounds.

Despite some dorms advertising communal kitchens on Pepperdine’s website, some students said they are apprehensive toward using them, which leads students to cook in their dorms using microwaves or simply eat at the Caf, Jamba Juice, the HAWC, or Starbucks.

Seaside resident second year Zach Jones said he doesn’t use the kitchen in Seaside but instead eats at the Caf or off-campus.

“I don’t really know if I want to be using the kitchen with people wandering past it,” Jones said. “It’s weird having people you don’t know just walking past you getting their laundry or whatnot.”

One of Jones’ only times using the Seaside kitchen involved an attempt at baking a pizza that took almost twice as long to cook as the packaging said it would. Jones said he is unsure if the mishap was due to his lack of cooking skills or the oven itself. Regardless, the situation left him unenthusiastic to use the kitchen again, he said.

Many students said that they too navigate cooking exclusively with a microwave due to unfamiliarity with how to cook from scratch, lack of recipes, or variations within microwave heat and time.

George Page resident and sophomore Ginger Jacobs said she recently had a mishap regarding a microwave and a can of soup.

“I was making the soup in the microwave and forgot to cover it,” Jacobs said. “A few people were sitting at the kitchen table and I left the room.”

After which, the soup began to make a popping sound.

“Everyone assumed I was making popcorn so they didn’t say anything,” Jacobs said.

When Jacobs returned, she found a huge mess and has since learned to cover her soup when reheating it. Her roommates and she now refer to this as, “The Popcorn Soup Incident.”

For those new to cooking with a microwave, Buzzfeed’s food and recipe division, Tasty, has hundreds of excellent and budget-friendly recipes designed with college students in mind. Many of which only require a microwave such as this easily customizable fried rice or this vegan mug mac ‘n cheese.

Buzzfeed also lists plenty of dorm-friendly dessert options too, such as a chocolate chip cookie made with a mug or even microwave-made birthday cake.

However, if those recipes seem a little too scary, Betty Crocker also released a line of single-serving mug desserts available at Ralphs that only require water and a microwave.