Channa Steinmetz contributed to the reporting and writing of this story.

In the wake of a national opioid crisis that kills 130 Americans every day, a Los Angeles non-profit is taking a controversial approach toward treating addiction.

At its Skid Row location, Homeless Health Care Los Angeles operates a syringe needle exchange program to reduce the rate of HIV and other syringe-borne infections in intravenous drug users.

“We serve a population that nobody else wants to serve,” David Murillo, HHCLA Director of Client Engagement, said. “Some people call it enabling, and that we shouldn’t be here, but people are going to inject no matter what. We can either give them clean needles, or they can find them on the street.”

The syringe exchange program opens its doors at 8:30 a.m., seven days a week. Monday through Sunday. Clients file in with their old needles, exchange them for clean ones and are given additional sterile materials.

“We give them clean cookers, alcohol swabs, cotton — we give everything so that intravenous drug users can inject safely,” Murillo said.

While the first phase of the opioid epidemic did not begin until the 1990s, the first needle exchange programs arose a decade earlier in Europe as a way to discourage needle sharing and prevent the spread of blood-transmitted infections, according to The Washington Post.

Since their beginnings, needle-exchange programs have drawn the ire of opponents who argue that the services facilitate drug use, but proponents like Murillo say they are saving lives.

“First of all, by giving them clean needles, we’re going to stop the spread of HIV and Hepatitis C,” Murillo said. “Second, when they walk in, they’re walking into a safe place. Let’s say they’re done, they’re tired, they wanna quit using: they can meet with one of our case managers and get right into treatment.”

Los Angeles County Sheriff Lt. Thomas Giandomenico said he saw the benefits of needle exchange programs during his time in Amsterdam serving in the military.

“I saw the effects of the safe-needle injection sites, places where people could come and safely get high, unfortunately, but they can dispose of their needles correctly,” Giandomenico said. “I know the mainstream would say that we’re enabling them to get high, but we’re also reducing the chance of spreading diseases.”

To Giandomenico, it comes down to the fact that addicts are going to use the drugs, regardless of whether there are safe conditions available.

“I don’t think it’s realistic for us to, you know, pretend like people aren’t going to use if they already use,” Sales said. “They are going to use until they’re ready to get help — that is going to happen. So if we can reduce transmission of diseases, let’s do that.”

Pepperdine Psychology Professor Michael Folkerts said needle exchanges also give users a chance to form a relationship with the people who work there, which can be very beneficial.

“Through the clean needle exchanges, users are given the possibility to form a relationship with somebody,” Folkerts said. “That person can then suggest counseling to them.”

Most needle exchanges offer counseling and treatment services, according to the Centers for Disease Control and Prevention.

Heavy opioid users commit crimes significantly more frequently than moderate opioid users and non-opioid users, according to a study on the relationship between illicit drug use and crime. During periods of heavy use or addiction, users commit more crimes in order to pay for their addictions.

“Basically, [people who are addicted to opioids] feel terrible when they start to come down, so they do whatever they can do to get their next high,” Giandomenico said. “There’s petty theft, stealing, there’s all kinds of crime that we know are directly affecting our society because of the opioids.”

“When someone goes and steals from their mom or their wife, it’s because they’re just so sick that they have to do it just to feel normal, to get out of those withdrawal symptoms,” Murillo said. “It’s not that they’re doing it just because they want to get high.”

Needle exchange programs keep withdrawal symptoms at bay, which may in turn keep users from committing crime, according to a report by the Harm Reduction Coalition.

“As far as a regular drug user, the times that you will steal is when you’re going into those withdrawals,” Murillo said. “But not if there’s buprenorphine and methadone, and Medi-cal is starting to pay for these programs. That might be a start on how the crime rate can be lowered.”

Buprenorphine and methadone are medications that can help people reduce or quit their use of opiates, according to the Substance Abuse and Mental Health Services Administration. 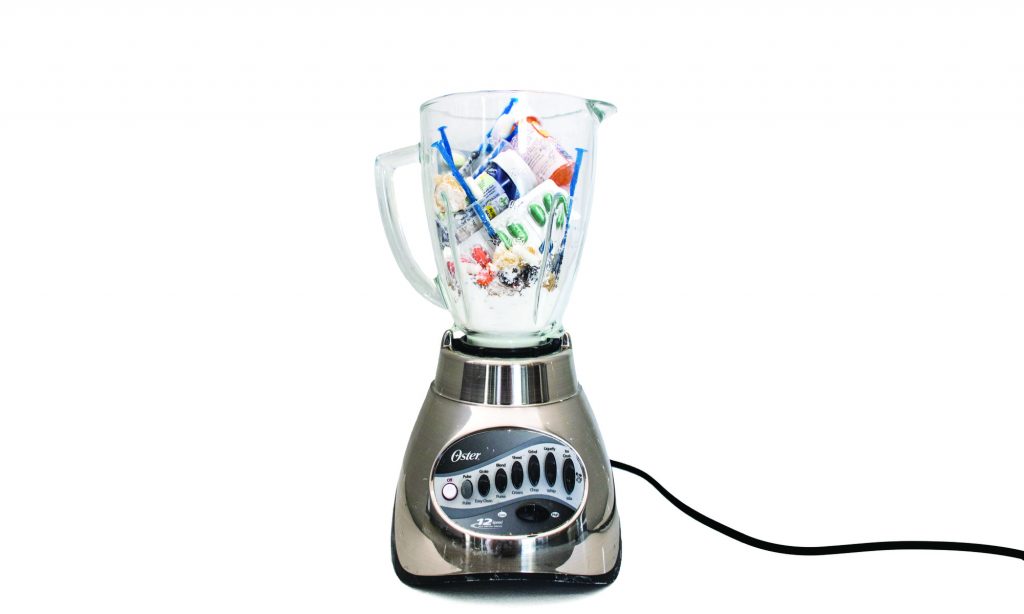 Sixty-five percent of drug overdose deaths in the United States are opioid-related, and 20 percent of these overdoses result from fentanyl, according to the latest report from the Centers for Disease Control and Prevention.

“Fentanyl is a synthetic opioid,” Murillo said. “It is being sold out in the street as what’s called “china white.” Fentanyl is 100 times stronger than heroin, so what’s happening is these people think they’re getting regular heroin, and they use the same amount as they would if it was regular heroin. Because of the potency of fentanyl, they’re overdosing.”

“Part of the misinformation is the phrase, ‘heroin kills.’ Well, many things taken at a very high dosage kill,” Folkerts said. “When a naive user takes a drug as they’re seeing regular users take it, that user hasn’t built up the same tolerance. That is where we may see adverse reactions or even death.”

With the rise in opioid-related deaths has come an increase in access to opioid antagonists such as naloxone, its brand name Narcan, which block the effects of the opioid, according to the National Institute on Drug Abuse.

“We have actually 66 deployments of Narcan already,” Giandomenico said. “Where 66 times, our officers came up on somebody who was having an opioid overdose and had to save them.”

Due to fentanyl’s high potency, fentanyl overdoses require higher doses of opioid antagonists such as Narcan to counteract the effects, which poses a challenge for first responders, Sales said.

“In that scenario you would need multiple amps,” Sales said. “You would need probably four to five doses and that’s pretty much all we carry.”

“Our clients can test their heroin before they use it,” Murillo said. “If they test it and it does come up positive, that’ll make them aware to not use as much as they would have if it was just regular heroin.”

In the event that an overdose still occurs, Murillo said the needle-exchange program is also offering all of their clients a naloxone kit.

“All our clients who come in here, we train them on how to use naloxone, just in case somebody they’re with, or maybe even themselves, overdoses,” Murillo said.

Along with fentanyl, users may be mixing with other drugs such as alcohol and cocaine, which is still problematic. A therapist and hypnotherapist at Seasons rehabilitation center in Malibu, Nancy Irwin, said a majority of her patients suffer with polysubstance abuse, or the abuse of multiple drugs.

“It is really rare they are just on heroin,” Irwin said. “Unfortunately, they usually use with alcohol — depressants and narcotics do not go well together. A narcotic is going to slow the heartbeat to a degree, slow the breathing. So if you have another depressant in combination with that, it can easily lead to a heart attack or you just stop breathing.”

Irwin said her patients typically have severe trauma from their past that needs to be addressed while treating their drug addiction.

“We find about 95 percent of our patients have trauma in the background,” Irwin said. “That could be sexual abuse, physical abuse, severe neglect, bullying. People have deep-seeded negative beliefs they need to continuously escape from and heroin provides that escape. We work to plug in healthy, empowering beliefs.”

Although, not all users are given the opportunity to receive rehab care.

The traditional response to the illegal use and possession of opiates in the U.S. is incarceration. The majority of addicted offenders will ultimately return to prison after being released, according to a study published by the Inquires Journal.

“I mean you’re going back to the war on drugs. They didn’t work,” Sales said. “You realize our incarceration rates are higher in America per capita than they are in virtually every other country in the world. But yet we still have historically high crime rates.”

Law enforcement officials acknowledge that the criminal justice system’s traditional emphasis on incarceration does not fit the needs of many offenders who have a history of drug addiction and have been pushing toward more rehabilitative methods of punishment, Giandomenico said.

“We work with the Department of Mental Health and the Department of Public Health to come up with kind of an outpatient system in custody, to where they can get help for their issue as opposed to spending time incarcerated,” Giandomenico said.

Research over the past 20 years has reported the beneficial impact of these restorative alternatives. According to one study, restorative treatment was 1.8 times better in reducing drug use than traditional incarceration, and offenders participating in community-based programs after getting out of jail were seven times more likely to be drug free and three times less likely to be arrested for criminal behavior than those not receiving treatment.

While its Skid Row location functions primarily as a needle exchange, HHCLA also offers a plethora of other rehabilitative treatment options.

“On Tuesdays, we have a Medicaid-Assisted treatment program here, so people who want to decrease their use of heroin or opiates can come here and are seen by a doctor and then the doctor will prescribe Subutex, which is buprenorphine,” Murillo said.

“Thursday we have what is called “wound care,” so sometimes clients inject and it gets infected, and they develop abscesses,” Murillo said. “We have a doctor who will come in and drain those abscess for them.”

They also have acupuncture, an art group and a harm-reduction group on Thursdays, Murillo said.

A client engagement specialist is available Monday through Sunday in case an individual wants to get into treatment, Murillo said.

There are numerous reasons why a needle-exchange program may not soon come to Malibu, Sales said.

One is that first responders do not often respond to opioid overdoses in Malibu, as Sales said the number of incidents is relatively low, Another is that they have the potential to attract a drug addicted crowd, Sales said.

“You have to be really careful with that,” Sales said. “If you have a needle-exchange program, are you attracting a drug addicted crowd? Is that what you want here in Malibu? We have 120 rehabs.”

In spite of the criticism HHCLA has been met with, Murillo said needle exchanges are making a positive difference in the lives of people who struggle with the disease of addiction.

“Needle exchanges are stopping the spread of diseases and also saving lives by distributing naloxone to clients, and taking people into treatment,” Murillo said.

If true, these resources could be critical going forward. Giandomenico said the opioid epidemic is not hitting Los Angeles as hard as it has hit the rest of the country.

“Unlike the East Coast where you’re seeing entire cities decimated, I think L.A. is on top of it, and we’re working to rectify any problems,” Giandomenico said.

But is only a matter of time until the epidemic hits Los Angeles, he said.

“And when it does,” Giandomenico added. “We’ll be ready.”