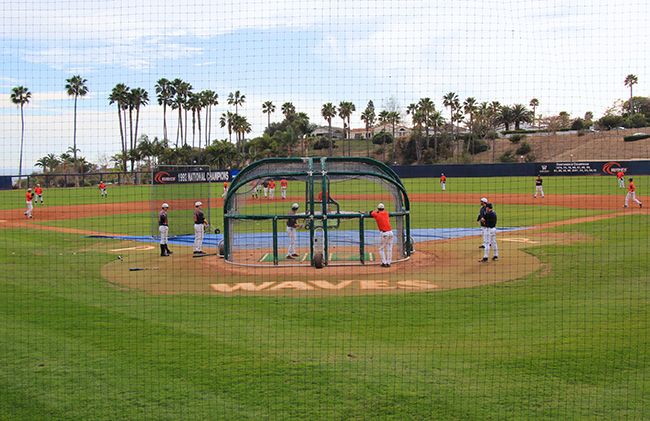 Two players on the Pepperdine baseball team stand out — one for his noteworthy performance on the field and the other for his stellar performance off of it. These two teammates, and coincidentally, best friends, each have potential future professions that are far from the average college graduate’s.

Left-handed pitcher and outfielder Aaron Brown, a junior, hopes to pursue a professional sports career, while utility player Connor Garelick, a senior, aspires to break into the entertainment industry. Although their future aspirations may paint them as wholly unique, they have many similarities. Both players clearly have a love for the game, but also believe in education and stress the importance of family relationships. 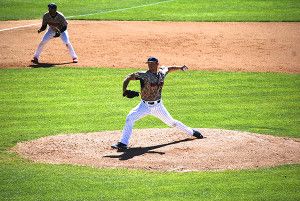 Aaron Brown was born and raised in West Hills, Calif., and has always had a passion for baseball.

“As a really young child, my parents would always find me throwing stuff, hitting stuff, running in the backyard. Anytime they would see me, I would have a ball in my hand. They soon got me into T-ball, stuck me out with the other kids, noticed a separation from [an] early age,” Brown said.

Brown began his baseball career at Chatsworth High School, starting out on the junior varsity team his freshman year before moving on to the varsity team his sophomore year, where he continued to play well for the next three years. In fact, he played so well that he had MLB draft prospects right out of high school and almost signed with the Pittsburgh Pirates.

“[The Pittsburgh Pirates] recruited me in the 17th round, right out of high school. They drafted me then, but it wasn’t an automatic sign. I was looking for a certain amount of money if I was going to pass up college,” Brown said.

Brown doesn’t regret not signing right out of high school — he’s happy about the time he has spent in college.

“It was the right decision to go to college, get an education, a degree and a few years of college ball under my belt, get to experience all the things Pepperdine has to offer as a whole,” Brown said. “You get your schooling, baseball, physical training, and get to meet all these amazing professors. It was also close to home, so that was a big thing for me.”

Brown said he doesn’t want to be a 40 year-old without a college degree, and said that if he gets picked up in the draft this year that he would take advantage of opportunities such as online classes to finish his degree. Family is also a huge part of Brown’s life, especially with him playing baseball and going to school so close to home.

“They are with me every step of the way. They’re with me when I have a bad game and a good one. That’s exactly what a player needs,” Brown said.

Brown said his faith also plays a major role in his journey. Born and raised Christian with a senior pastor as a father, he recognizes the importance of searching and making something his own.

“I’ve grown up in a sports world, where God has really blessed me with certain abilities and talents. I just need to put it to work and see where it leads me, and ultimately give him the glory,” Brown said.

Brown has high standards for himself this year, and believes that he has been put in a really good position to sign in the draft. He is going to do whatever it takes to win a game, and believes that the team hasn’t even played to their full potential yet and that they can do better.

“When you have a group that has a strong bond on and off the field, it creates something special when you play together. Even when we’re down in a game, we have a positive mentality,” Brown said. 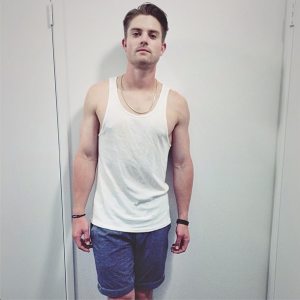 It’s one of the most picturesque collegiate baseball fields — Eddy D. Field Stadium, home to Pepperdine’s 35 players and four coaches. The perfectly watered green diamond surrounded by brown dirt, along with lofty palm trees in the background set against the piercing blue Pacific Ocean waves crashing down make for a perfect game day. It’s 10:40 a.m., with 20 minutes to go before the first player steps up to bat and the game begins. Both players and coaches are gathered in the clubhouse, sitting in a circle. Player number 44 strides to the center and starts dancing to Daft Punk’s “Get Lucky.” The Waves are set to begin, as their pregame dance ritual is completed. Decked out in his home game uniform, number 44 is ready to go.

At first glance, you wouldn’t necessarily guess that Connor Garelick plays on the Pepperdine baseball team, or that he has previously attended three different colleges and harbors a secret ambition to become an actor and a model, or even a business tycoon.

On the team, he plays the utility position, which consists mainly of outfield work, first base and catcher. Starting with T-ball at the age of 3, baseball has always had a special place in his heart. On the other hand, Garelick also grew up attending movie premieres and Broadway shows, as his parents are on the business side of the industry. For this reason, acting is something Garelick has always been interested in as well.

“In New York, I really started getting into [the] modeling / acting scene. I went to one of the top theater schools [Wagner College],” Garelick said. “Baseball has gotten me here. I live it. I love my team. But as graduation is approaching, I’m seeing what I want to do with my life, and that’s to get into entertainment.”

He’s a gentle soul, who values family above all else. He has two sisters: Haley, 19, and Brooke, 18.

“Family goes before everything else. They know you better than anyone,” Garelick said.

He said he knows how important his relationships and friendships are in life, and how baseball has helped him form these relationships.

“Baseball is a game of failure. You have to deal with adversity. It’s important to keep pushing and going,” Garelick said.

As much as he loves baseball, that chapter of his life is closing. Garelick recognizes that he’s good at baseball, but not to the extent where he can have a full career with it. Acting and modeling, however, is something Garelick believes he can make a career out of.

His plan is to get into the entertainment industry as soon as possible. He’s already had meetings with various companies and is interested in working with either Ford Models, Wilhelmina Models or LA Models.

“I want to do kind of like what Channing Tatum did, where he used modeling to build a fan base and brand,” Garelick said. He’s doing all of this in the hopes of making his dream career a reality as graduation approaches.

“[Acting and baseball] are two completely different fields, but are also very similar. Both sports and entertainment are very competitive. Both are highly regarded, but only a few have made it. They both kind of do the same thing in that sense,” Garelick said.

Garelick is a hard worker, and has been so throughout his life. His family friend and mentor, Oscar-winning actor Anthony Hopkins, has stressed to him the need to push hard. Garelick’s plan is to start off modeling, and then break into film and perhaps television. Garelick loves movies because, “they are a portal into a different world for me. I want to enter that world.”

Although the entertainment field is difficult to pursue, Garelick is not fearful, but rather confident and determined.

“People oftentimes are scared to pursue their own dreams for fear of failing. Work as hard as you can to pursue that dream. Don’t be so concerned about what others think of you. It’s ultimately your life, no one else’s,” Garelick said.

The two players seem like unlikely friends, but they have more in common than meets the eye — so much so that both players have described their relationship as a “friendship that will last a lifetime.” They share similar interests in arts, love going to the jacuzzi after a long and hard game, and enjoy just hanging out. They can often be seen playing pingpong in the HAWC. They also go to a restaurant called Gushi located in Westwood at least once a week.

“Aaron and I always have fun together no matter what we are doing, and I value his friendship so much, and it will definitely be a friendship that will last a lifetime,” Garelick said.

Baseball Head Coach Steve Rodriguez recognizes the unique dynamic between these two players on the team. Rodriguez serves not only as the baseball team’s head coach, but also as a mentor to many of the players. He knows that not all members of the team are going to continue their baseball careers professionally, but he believes that is what makes the team so amazing and unique.

“You can learn so much from sports in general. Some people are very athletic and can take it to the next level. The other part is that you have to learn discipline,” Rodriguez said.

Rodriguez loves the array of players on the team.

“We have these two players: Aaron and Connor. Aaron is a very gifted athlete, and I have no doubt that he is going to succeed at the next level when he gets the opportunity. Connor has found himself a little niche, and he’s become very good at it. It would not surprise me at all if he becomes very successful in the acting industry,” Rodriguez said.

For the time being, Garelick and Brown work together as a team. Brown strikes out players and Garelick boosts the morale of the team.

“Connor’s personality kind of makes up our team. He does a really good job at understanding situations and keeping things loose,” Rodriguez said. 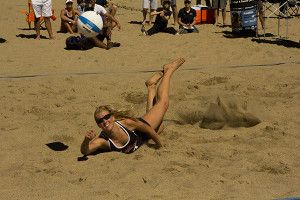 Photos by Allison Hubbard The Waves assumed their natural place last week on top and on the shore. The No.1-ranked sand...
Copyright 2013 Jupiter Premium Magazine Theme
Back to top