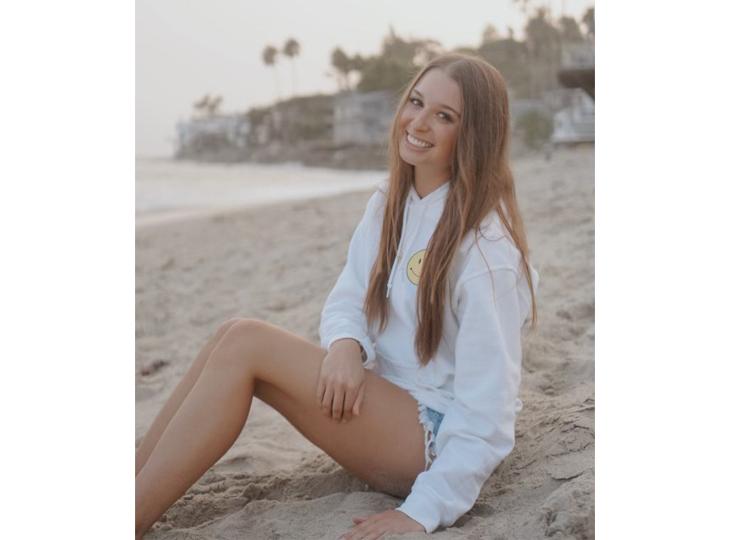 Sophomore Liberal Arts for Education major Abby Gearhart smiles while shooting promotional photos for her company, Sweats by Abby G, in September on Ralphs Beach in Malibu. Gearhart said she first started designing sweatshirts in May and officially launched her company in September.

Sophomore Liberal Arts for Education major Abby Gearhart said her mission is to spread positivity and self-love — no matter what. After quarantine boredom inspired Gearhart to embroider her own designs on sweatshirts, she felt motivated to start a loungewear company.

Sweats by Abby G officially launched in September after Gearhart said she moved to Malibu from her home in Naples, Fla. Now, Gearhart designs all of her sweatshirts and sweatpants in Malibu. According to the company’s Instagram, its motto is “Spreadin’ Joy Through Comfy Clothes,” as positivity encapsulates all of Gearhart’s designs and branding.

“Self-love and all that is something that I am very passionate about and I just want other people to practice it, and even I need to get better,” Gearhart said. “Me creating all of this and trying to spread the message has helped me be like, ‘OK, reality check — you need to get better at loving yourself.'”

Gearhart struggled with comparing herself to others, particularly in high school, and she said she believes comparison is the thief of joy that creates jealousy, especially between other women. She wants her positive messages to help people grow more confident in themselves and she wants the best for others — and her mission is working.

“This girl from my hometown texted me and was like, ‘Oh my gosh, I was just in Walmart and some random person came up to me and said my hoodie made their entire week and that’s the most positive thing that they’ve seen,'” Gearhart said, after her friend wore one of her hoodies in public.

Every design Gearhart creates is intentional, she said. She will not use a design that she hasn’t thought about or worked on for a while.

Gearhart primarily gets inspiration for new designs on Pinterest. In terms of individual designs, she said she usually comes up with a vision and writes it down in her notes app. She then draws all of her designs by hand on her iPad and sends them to a screen printer in Westlake Village, Calif.

“Being in Malibu is great for the photos and branding,” Gearhart said. “I have all my friends here to help me and it’s easier to start a company when you’re out near Los Angeles.”

Starting a business from the ground up was more difficult than Gearhart initially thought, but she said she grew a lot on Instagram through hosting giveaways. She also posted a few TikToks, which gained popularity, and created an ambassador program.

“I got a very overwhelming amount of applications [for the ambassador program], so I just literally read through all of them and I only wish I could have taken in everyone, but the groups of girls that I took are so great,” Gearhart said.

Gearhart’s short-term goals for her company consist of focusing on rebranding and launching her new summer collection in May, while her long-term goals include securing an office space after she graduates. She plans to host pop-up shops and release new, simpler designs in her upcoming collection.

After successfully starting and launching a business during a pandemic and an online semester, Gearhart said she learned a lot about patience.

“You have to be patient on growing and having everything figured out,” Gearhart said. “It’s definitely not easy, but I think it’s definitely been worth it, and I think it’s crazy to think of how much I’ve just grown in the last couple of months.”