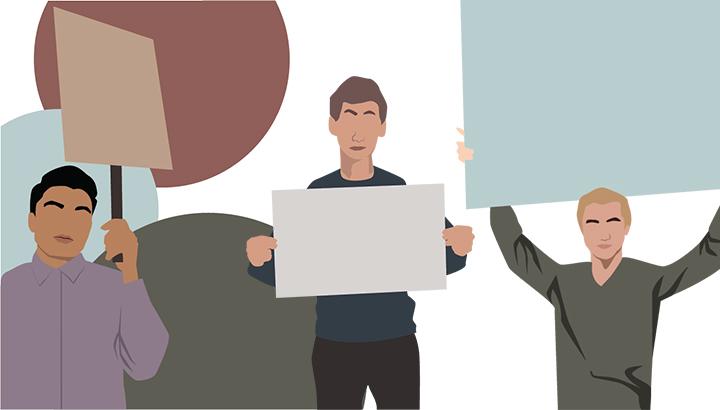 If feminism is advocating for equality of rights and opportunity between genders, then it is easy to say that everyone should be a feminist.

Many men at Pepperdine and beyond agree, labeling themselves as feminists and hoping to contribute to a cultural change.

Nonetheless, some men believe that fourth-wave feminism has overstepped its boundaries.

“Fourth-wave feminism has sort of given a delusion that there should be almost like female superiority over some instances because of oppression — sort of like men should pay social reparations for all the harm in the past,” said Bryan Munguia, senior integrated marketing communication major. “I think men are scared or are confused that they don’t have a place in feminism because of how it’s presented today.”

Some male students think that feminism has run its course in America because equality of opportunity is now a reality, while some still consider it a label with which they’d describe themselves. Each said he believed that feminism plays a role in his life, from family relationships to dating.

Several male students agree and identify with the core principles of feminism, but when it comes to the contemporary movement, they are not so sure.

“As far as the pure definition of ‘feminist’ is concerned, I would say, ‘Yes, I totally am [a feminist],'” junior engineering major Will Soiland said. “As far as the kind of connotation feminism has taken today, I wouldn’t really publicly state it. … It’s kind of created a culture of labeling toxic masculinity and stereotyping and judging that upon most males.”

Senior biology major Leo Master is a critic of fourth-wave feminism, which began around 2012. It is rooted in intersectionality and includes the use of technology to combat sexual misconduct and support equal pay, according to Encyclopaedia Britannica. It follows the first three waves, which focused on legal inequality (late 19th and early 20th century), gender norms (1960s to 1980s) and responding to the perceived failures of the first two waves (1990s to 2000s).

“[Feminists] are fighting for the perception of themselves in other people’s minds,” Master said. ” … Feminists nowadays [have] this inflexibility of philosophy and inability to recognize that they are taking a subjective position that can be argued against.”

Though he acknowledged how emotionally charged the conversation surrounding feminism remains, Master said he believes that the movement attempts to force something that should be left to happen on its own.

Men can be feminists

Female professors who study gender issues attempt to dispel the confusion surrounding contemporary feminism and the misconception that feminists are man-haters.

“People are kind of scared of feminists,” Political Science Professor Candice Ortbals said. “I like to reject that because I think a lot of women are perfectly affable people, but they still want to see success and they can notice discrimination and structural inequalities.”

English Professor Katie Frye said feminism is not exclusive to women; men can and should participate.

Several male students agreed that men ought to engage in advocacy in some capacity.

A Currents survey of 221 students found that 96% believed that men could be feminists. However, only 48% of the 81 men in the survey identified as feminists, roughly 20% were unsure and 32% said they were not feminists.

Abad said some men in feminism are silent advocates, while others like himself are more outspoken.

Abad, a junior business administration major, and Justin Meza, a junior philosophy major, were both raised in households where their mother was the primary breadwinner.

Meza considers himself a silent advocate for feminism — one who acts against gender discrimination but dislikes the extremes of fourth-wave feminism.

“They don’t want equality as much as they want women to just be pushed up higher,” Meza said. “… To me, it’s like more like a secondary kind of feminism.”

Equality of rights and opportunities

Soiland said he believes that legal equality has already been achieved in the United States and feminism should now focus its efforts abroad.

“The fight of feminism today has become almost futile, in terms of how there’s actually a lot of other countries out in the world where women don’t even have close to the rights that women do in America,” Soiland said.

In the United States, women make up the majority of educated people entering the workforce and earning advanced degrees since 2019, and they are moving toward equal representation in government, business and higher education, according to Pew Research Center. Master said he believes that these trends prove equality of opportunity already exists and equity will be achieved naturally within the next three decades.

“Because of this equitable level based upon our development of society, women will now just naturally progress to a level of equity where men have socially stood,” Master said. “It isn’t something that needs to be actively fought for.”

Although women are more represented in positions of power now than they were before, they are still not represented equally. For example, the number of women in Congress increased from 19% to 24% in 2018.

This progress also does not change the fact that women made, on average, about 82 cents for every dollar men earned in 2018, according to Pew.

“It is patently unjust and unfair to me that a woman — doing the same job as a man with the same level of qualifications and the same level of time and a position — is paid less,” Communication Professor Bert Ballard said.

“Women are not getting the equal opportunity that men are getting, and that’s simply because of their gender,” Tapan said. “I personally think that women bring a lot to the table, and they are much more emotionally intelligent.”

In the Currents survey, about 74% of men agreed with Tapan, believing that gender inequality still exists.

Men are supposed to be leaders in the house, some students said.

“He’s the man — he’s supposed to protect his wife and kids,” Soiland said.

“What does it mean to be a man in culture in the United States right now?” Goodman said. “The push to be strong, the push to be manly, to not experience emotions — we’re backing down from that.”

This shift may also be shaping men’s roles as husband and father; Soiland went on to say that although he believes that a man should be a leader of the home, “he shares that leadership also with his wife.”

Junior political science major Jonathan Feher mirrored the sentiment of an equal partnership in marriage and further expressed his desire to teach his future children to do so as well.

“First and foremost, I would want to model equality in the relationship with my wife that my children could observe as they’re growing up,” Feher said.

Abad, whose father encouraged him and showed him strong values, said he would like to do the same for his future children.

“[I would] teach my daughter what a lot of people teach their son to do: … Take up whatever you want, make sure you stand up for yourself, be confident,” Abad said. “I was taught that from my dad. I would teach my son the values of being empathetic, understanding, loving.”

Ballard emphasized his approach to motivating his own two daughters.

“I have tried to encourage my daughters to know that they can do anything, be anything, believe in themselves, … to never feel as though they have to take a backseat to anyone or anything,” Ballard said.

Meza said due to feminism and the current political climate, when he takes a woman on a date, he is now faced with a question: “Should I pay for dinner?”

“In my ideal world, there would be no question that if we are going on a date, I’m paying for dinner,” Meza said.

To Master, feminism and chivalry counter each other. He said he believes that chivalry is meant to acknowledge the differences between sexes.

“Chivalry really is a culture of … men realizing that as the more powerful party, it is their duty to accommodate and not degrade women,” Master said.

However, most male students agreed that feminism and chivalry are not mutually exclusive.

“When it comes to chivalry, it’s just the idea of being respectful toward the person that you’re with and showing that you care,” Tapan said. “It’s not necessarily this gender thing.”

Feher agreed and said when he takes a woman on a date, it’s all about demonstrating respect.

“If you were to go on a date where there is more of a social norm to display extra chivalry … then I think it’s all about respecting her wishes,” Feher said.

Soiland said that if a woman wants to pay on a date, “that’s totally fine.”

Echoing Tapan, Abad thinks that opening doors and engaging in other acts of kindness should not be gender-related.

“It’s good to be a good person,” Abad said. “Doing little stuff like that — don’t just do it to women, do it to everyone.”

For Braden Ritchey, junior religion and philosophy double major, chivalry is all about showing love to people. But if someone is unreceptive to it, he will not force it.