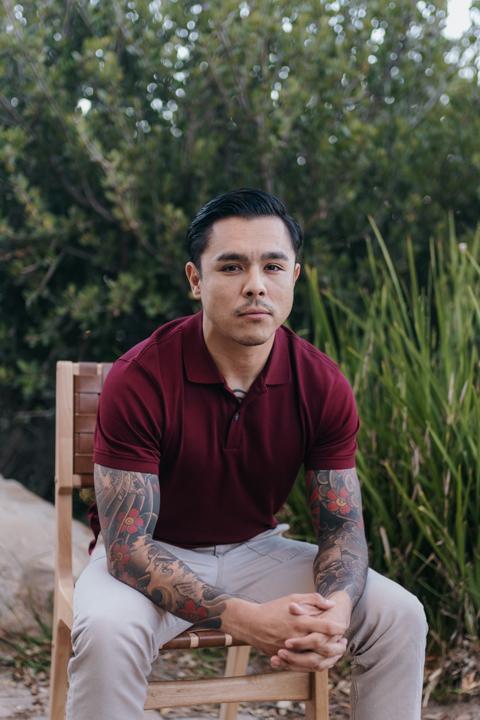 Purpose, service and leadership — Marine veteran Eddie Castillo lived by those words long before he enrolled in Graziadio Business School and heard them as part of Pepperdine’s mission statement.

For as long as he can remember, Castillo has had a heart for service. Whether it be fighting for his country, coaching a special needs baseball team or volunteering to help fellow veterans, Castillo is passionate about giving back. He served two enlistments as a Marine in Afghanistan.

“The oath never stops and global citizenship never ends, you get back home and you just do good,” Castillo said.

Castillo grew up in Compton, California, and knew he wanted to be a Marine from the age of 10. He said people had the tendency to laugh at this idea because he was known to be a lazy kid. This didn’t affect Castillo much — when the opportunity presented itself, he followed his childhood dream and started his journey to becoming a Marine.

A young and determined Castillo first enlisted into the Marine Corps at 18 as a logistics management specialist, his first military occupational specialty. In this job, he was in charge of making sure his troop had everything they needed to be combat ready.

At 22, Castillo re-enlisted as a forward observer, making him responsible for directing the artillery and mortar fire onto a target. This was a drastic change from his first position because he now spent his time directly in the field.

Castillo said each position and his collective time serving molded him into the man he is today.

“I mean I can’t even put into words the benefits that come with something like this,” Castillo said. “I think it’s probably the best decision I, as a young man, could have ever made.”

During his time in the Middle East, Castillo said they did as much as possible to help the Afghan people. American soldiers trained Afghan soldiers proper weapon technique, how to save lives and basic life skills. He also said they opened education centers for the Afghan people, where one female student attended school for the first time.

Castillo served from 2008 to 2015, a total of seven years with three different military occupational specialties. He took part in the benefits and services that Veteran Affairs offers and decided to come to Pepperdine as a Graziadio student. He is a part of PeppVet, where he connects veterans with other veterans from each of the schools and serves as a voice for the campus-wide veteran community. After graduating, Castillo said he hopes to work for the U.S. Department of Veteran Affairs.

“I think for anyone who’s committed, you know, who’s raised their hand and done the oath, they think their service is continuous,” Castillo said, “Because I know that I find myself still trying to find ways to give back to the community.”