The Northern Trust Open, a staple on the PGA Tour and a 500-point scoring opportunity in the season long FedEx Cup, kicked off at the Riviera Country Club in Pacific Palisades on Wednesday Feb. 12. The PGA event offered SoCal fans a chance to watch professional golf over the course of five days at a local course and hosted the Waves men’s and women’s golf teams on Thursday Feb. 13 with a special “Pepperdine Day” promotion.

“Pepperdine Day” allowed the Waves to join in on the festivities and catch the action from a large, open-air tent located near the center of the course dubbed the Palisades Club. Fans and supporters of the team could purchase special tickets to join the Waves, with $30 of the $65 asking price being donated to the university’s golf program. 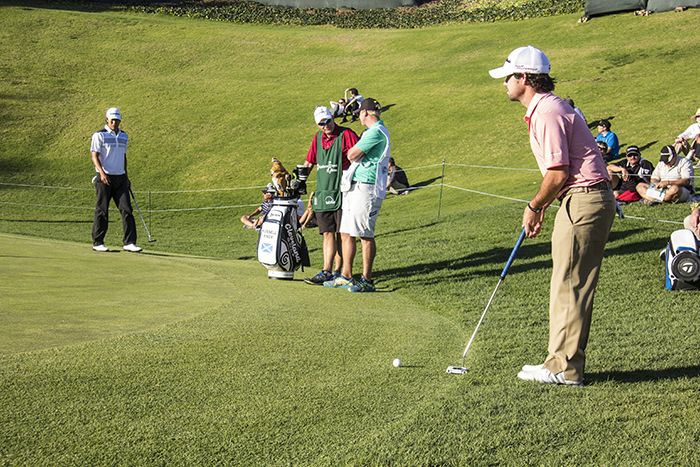 “We were contacted by the people at the Northern Trust Open and they wanted to do a little something to support collegiate golf,” said Steve Potts, Director of Athletics at Pepperdine. “Just to be here in front of all these people … it is pretty cool. It’s a good way to get some of our supporters out and make some connections. The people at the Northern Trust Open were just so kind to do this for us.”

The fundraising efforts will go toward renovations for the golf facilities on campus, according to men’s Head Coach Michael Beard, who said the event was a fun experience for everyone involved.

“[The team] loves it. Anytime you get to come out here on such a great golf course and get to see the best in the world play, not only do the guys learn a lot but they have a lot of fun,” Beard said.

“Just like any of our student athletes, when you see the guys playing at the professional level they get excited about it,” Potts said. “A lot of them have aspirations to one day do that and it’s good to be out here and get that experience.” 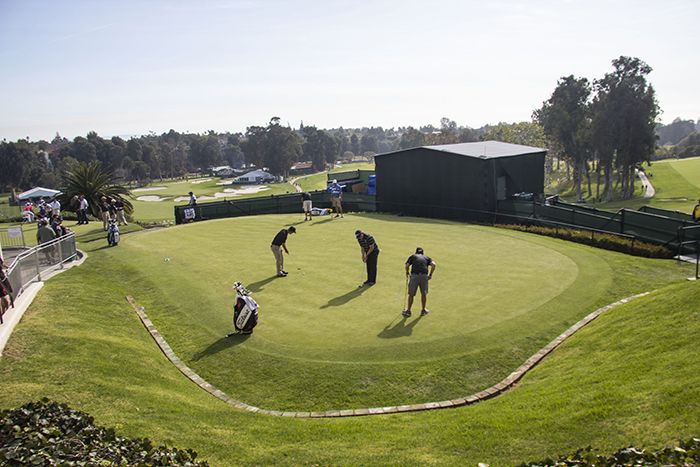 The Waves were able to follow and learn directly from three Pepperdine Alumni and former Wave athletes who were competing in the event. Michael Putnam (‘05) and Jason Allred (‘02) are both Byron Nelson Award winners for Pepperdine, and Jason Gore (‘97) helped win the NCAA Championship for the Waves in 1997. All three competed in the event, with the latter two qualifying at the last minute and entering the event the Monday before it began. Putnam was on hand at the Palisades Club after his rounds Thursday, and spoke with the Waves athletes in attendance.

“Being able to talk to Michael and kind of pick his brain is great,” Beard said. “For him to come by and hang out with our players is pretty cool.”

Putnam shared stories with the team about his time as a student-athlete at Pepperdine, providing helpful tips and overall advice to the current Waves.

“It’s cool to come back to the Malibu area,” Putnam said. “I loved my time at Pepperdine. It’s fun to come back and cruise around the old stomping grounds [and] it’s cool joshing around with [the Pepperdine team]. Plus this is a really cool deal that the tournament does for Pepperdine.”

Putnam finished the tournament 74th overall, and although it might not have been where he would have liked to finish, he was still happy to support the Waves. Putnam donated 10 percent of his tournament winnings to the university’s golf program.

Jason Gore finished with a tie in the 59th spot, while Jason Allred was one of the bigger overall successes in the tournament, finishing in 3rd place behind Dustin Johnson (2nd) and Bubba Watson (1st). As the 900-overall ranked professional before the tournament, Allred secured strong finishes of 64 and 67 on Friday and Saturday, respectively, off of some huge birdie rounds and was able to remain in top contention on the final day of play.

In addition to the Pepperdine alums, professional golfer James Hahn (tied 29th), known for his stellar play as well as his infamous Gangnam style celebration dances, shared some advice with Pepperdine’s golfers.

“The advice I would give them is to just go all in. Don’t think that just because you are younger or are just about to be out of college that you don’t belong,” Hahn said. “If you take advantage and work hard, you will have a chance.”

According to Beard, Pepperdine golf hopes to come back to the tournament again next year as a continued learning experience.