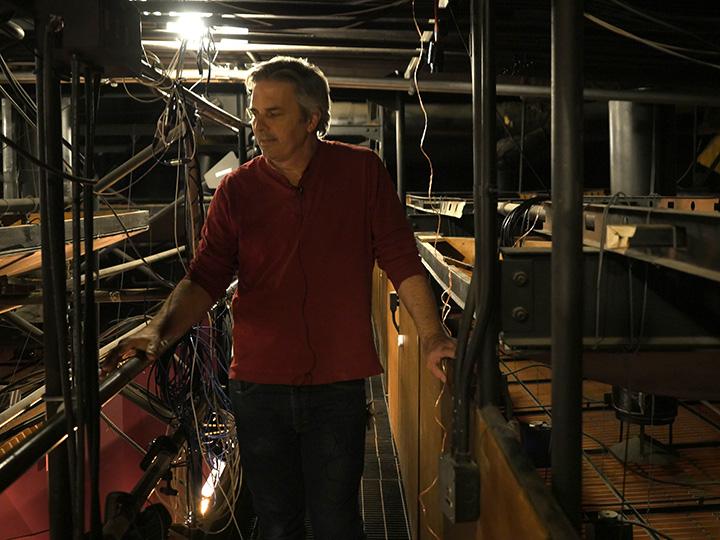 Editor’s Note: Kaelin Mendez was an employee at Smothers Theatre at the time of writing this article.

When Stewart O’Rourke, now assistant technical director at Pepperdine’s Smothers Theatre, worked backstage for Songfest in the late 1980s, he and his fellow workers heard clapping coming from above them in the beams.

The strange part: No one else was in the Theatre.

“It seriously sounded like one person clapping,” O’Rourke said. “And it had the unevenness; it had the human quality to a clapping.”

Since then, those in the know in the Theatre department have called this phenomenon The Clapper.

However, this is only one of two spirits the Theatre has seemed to house over the years. O’Rourke said some students in the early 2000s claimed to have seen “a white image,” later dubbed the Lady in White.

“Considering where we are, and because we’re in the theater world—we’re in the art world—and imagination is always running wild, it’s very easy to get caught up in it,” O’Rourke said. “But there are some instances that you can’t really explain.”

O’Rourke said he has been at Pepperdine since before the 1980s — growing up with the faculty children, starting school at Pepperdine in 1984, then staying on part time after graduation to fulfill different roles. He eventually stepped into the title of assistant technical director 19 years ago.

“I’m kind of a fixture around here,” O’Rourke said.

After the last Songfest performance of what he believed to be about 1988, O’Rourke said Production Manager David Barber sent the crew to shut down equipment and lock up. After they were done, Barber had them meet on stage afterwards to talk about the next morning.

“We were all gathered on stage, and we hear some clapping up in the beams up above us where the lighting instruments are,” O’Rourke said. He went on to say, “We thought, ‘Oh, that’s funny,’ and so we called out to see who was up there and nobody answered.”

Looking among the crew on stage, they noticed no one missing. Barber climbed the ladder that led up to the beams, but as soon as he reached the top, the clapping stopped, at which point he climbed back down, O’Rourke said.

“We start talking about, ‘I wonder what that was. Could it be the soundboard or the lightboard or something mechanical?’” O’Rourke said. “We went and checked those. Those were all off; all the power was off. ‘No, it’s not.’”

O’Rourke said The Clapper made appearances up into the 1990s. However, O’Rourke has not heard of any recent reports of The Clapper.

“I haven’t had it appear in the 2000s, but I haven’t been here late at night too often as we were then,” O’Rourke said. “But it might happen again.”

O’Rourke said the Theatre has undergone two changes in sound and lighting systems since then, so it is possible that the clapping sound was in fact due to something mechanical, contrary to the conclusions he and his peers came to that night.

The Lady in White

“He was giving us a tour of Smothers — he told us about some of these stories,” Drake said. “There’s these hallways in the back of Smothers.”

She said that people have claimed to have seen figures in that part of the building.

The hallway that Drake referred to provides access to the Theatre’s control booth and Technical Director Rick Aglietti’s office. O’Rourke said it was at the end of this hallway that, in about 2002, a couple of students reported to have seen a white image at night.

“At the time, we couldn’t think of anything,” O’Rourke said. “I said, ‘There’s been nobody up there. Nobody’s died up there.’ We’ve had no deaths in the Theatre itself.”

O’Rourke said this image, which became known as the Lady in White, did not, however, frighten the students who made the claim.

“[T]hey were just startled because it was up in a place that you didn’t expect to see anybody or an image,” O’Rourke said. “That’s always been the creepy end of the hallway. So whenever our tech staff goes down the hallway, we kind of make a beeline to where we need to go.”

In that hallway, there is also a small door that leads out to a vantage point overlooking the Theatre.

Aglietti, who has been technical director for the last 20 years, said he sometimes hears the sound of moveable pipes being hit against the metal catwalk above the Theatre. At times, he will use the vantage point to find that a careless student had caused the noise, and other times, he will come out to find no one in the Theatre.

“It’s not like air or fans can make those move,” Aglietti said.

After hearing the sound early one morning, Aglietti said he went to the vantage point to check the Theatre, the small door propped open with a five-gallon can as it had been for weeks.

“When I was out there, the door slammed behind me, and that big bucket just shot across the floor toward me, and I just didn’t understand how that could have happened,” Aglietti said.

However, Aglietti said he did not jump to a supernatural explanation.

“I didn’t immediately say, ‘Oh, that was the Lady in White,’ or, ‘That was The Clapper,’” Aglietti said.

O’Rourke said if the students had seen a spirit or if there was a ghost that roamed that hallway, it may have been connected to Civil War-era clothing that was stored in the hallway at the time.

“The only thing that creeps me out about old costumes and old clothing is you just don’t know the history of them,” O’Rourke said.

It is possible that what people perceive as ghosts could in fact be remnant energy that people left behind in places and objects, O’Rourke said.

“When you do get into a space that is lively and filled with people most of the time, and it does get quiet and dark, you start thinking, ‘God, there’s a lot of energy around here,’” O’Rourke said. “‘I wonder if it ever dissipates. I wonder if it ever goes away. Or does it just manifest in some form or fashion?’”

The costumes, however, are no longer in the hallway, and unexplained phenomena seem to have calmed since then.

“[The outfits have] gone on to another life, and our costumes aren’t kept up there, so I haven’t had any reports of ghosts or creepiness going on,” O’Rourke said. “But there’s always a chance for a return.”