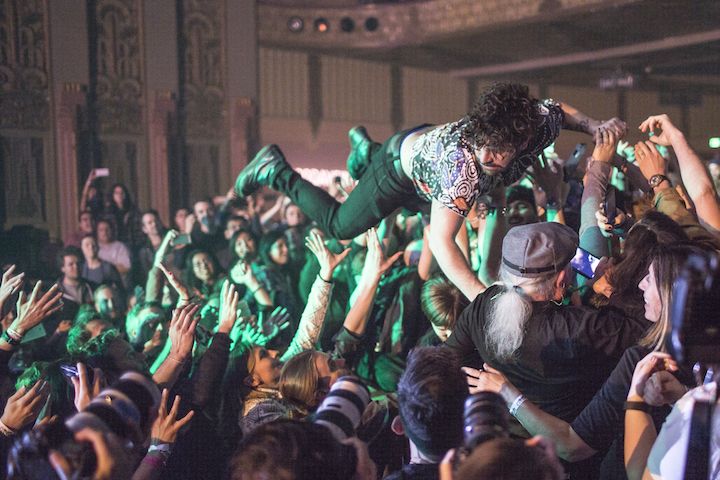 When a British rock star dives off of a venue’s stage, crowd surfs on multiple occasions, and runs through the audience with the energy of an Ever Ready bunny, the show is bound to be a good one. And last Sunday was no exception. UK-based rock group, the Foals tore up The Wiltern stage on Nov. 29, bringing the heat to Los Angeles in connection with Red Bull’s “30 Days in LA” initiative.

For the past decade, the Foals have built a dedicated following in both the UK and the United States with their strong indie rock/British pop sound. With their concert at The Wiltern being their first show in support of their fourth studio album released late August called “What Went Down,” anticipation was high as the hype machine was working overtime. Having millions of YouTube hits on their music videos and sold out shows across multiple countries, this band might be one of the few to live up to the talk.

The night began at 9 p.m. with local groups Novosti and Son Little, the audience started to pour in as free as the venue’s drinks were pouring out. Soon the medium-sized theater was packed, and by 11 o’clock, the audience was shouting for The Foals.

When the lights went down, the crowd screamed in excitement as a backdrop of a field began to lower behind the Red Bull Sound Stage logo and a single note rang out ominously. Smoke filled the air and the lights started to shimmer. Rhythm guitarist Jimmy Smith, percussionist Jack Bevan, keyboardist Edwin Congreave and bassist Walter Gervers walked onstage. Cheers echoed through the auditorium, transforming into shrieks of excitement when lead singer and guitarist Yannis Philippakis, wearing a brightly-patterned shirt with his curly hair tousled just right, strutted to center stage.

After they situated their instruments, the band ripped into their opener, sending the thunder of the bass and the consistent hits of Bevan’s driving kickdrum throughout the room. Philippakis’ impressive vocals were spotlighted as the band launched into “Night Swimmers,” “Mountain at My Gates,” and song after song with upbeat, funky, retro goodness.

Philippakis was the picture of adrenaline, running across the stage and around the room, while Bevan stood on his drum set, smashing his drum sticks together in time with the audience’s claps. Songs spanning over seven years of releases, Foals fans were given the opportunity to see the band’s evolution into their newest album “What Went Down.”

After a couple of stunts by Philippakis and a fantastic performance, the band was sent out into their major headlining tour with a roar of approval from their LA audience.

If you missed their show this time, don’t be too alarmed! Though they will be all over the country (and the world) in support of What Went Down, They’ll be back in LA on Dec. 12 for KROQ’s almost acoustic Christmas. Get tickets here before they sell out, and follow the Foals on Twitter and Facebook for band updates and show postings.