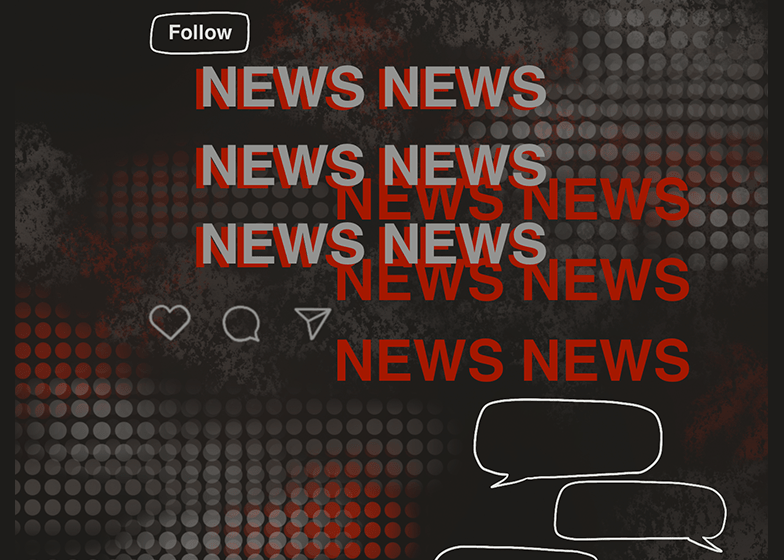 Today, anyone with an internet connection can access news. Social media users can share articles and follow specific news accounts, consuming information rapidly. It’s a seemingly perfect development for journalists and consumers alike, but can using social media as a news source really be that simple?

While social media can provide an efficient way for users to learn about current events and news stories, social networks can also aid the spread of misinformation. The duality of social media and humans’ growing consumption of news on social platforms has led to increasing conversations about the need for news literacy.

“I think the challenges are that for the average person, and rightfully so, you do not have four or five hours a day to consume the news, nor do you want to,” said Elizabeth Smith, news literacy researcher, professor and a Graphic adviser. “Social media has become such an easy place to have some mindless entertainment but also see what your friends are doing and then see what your friends are sharing.”

In a March 2021 survey of 41 Pepperdine students, 95% self-reported they were familiar or very knowledgeable of current events. The survey revealed 90% of the students used social media as a news source.

While senior Charlotte Lang uses social media as a news source, Lang said she makes an effort to go to multiple sources for her news, understanding that many outlets report on news from a specific angle.

“I try to get a wide smattering of perspectives, so that I can hopefully pick out the true story underneath all of the different lenses,” Lang said.

Lang said she likes to pursue news on her own and keep social media as a place for social engagement.

“I try to use it to detach from everything that is happening in the world, so I don’t follow many new sources,” Lang said. “I don’t follow many celebrities. I like to check in on some politicians’ accounts but just because that’s what interests me.”

Coming from a journalistic perspective, senior Brianna Willis, digital editor of the Graphic and executive producer of NewsWaves, said she believes each social media platform reaches a different user demographic.

“I know Twitter is where a lot of newsies are going to get their news,” Willis said. “And then, of course, Instagram is just more of a likable platform, so we’re going to see [news] there out of convenience because most of our age group is on it. And then Facebook, is where a lot of older people are.”

“We’ve had really good media engagement that we’ve never had in the past, and, of course, I think that’s due to being remote this semester,” Willis said. “It’s the only place people are coming to find some of the content, whereas we used to have the print pieces on the stand.”

Willis said she also believes isolation due to the pandemic attributes to the increased activity on the Graphic’s social accounts.

“People are just coming to talk,” Willis said. “They don’t have a lot of people to talk to, and the comment section is one place that they can talk to each other and just get out their opinions.”

The Duality of Social Media as a News Source

Pointing out specific advantages of social media, Willis said the Instagram comment section acts as a forum for dialogue on current events and news pieces.

“It definitely provides a platform for people to respond,” Willis said. “Of course we have other ways that they can do that like letters to the editor or being a guest contributor, but I think it’s just a lot easier and more accessible for people to engage with social media.”

In addition to opportunities for engagement, Willis said she relies on social media, specifically Twitter, for quick updates on current events and is grateful for the ability to get news at her fingertips.

Smith said she sees advantages in the way social media serves as a tool for users to bring awareness to important topics.

“There’s some great things about social media: People can have a voice, you can share and talk about things that you never would have had a place to do that,” Smith said. “I think the Me Too movement exists largely because social media gave people a place to speak out. All of those things are really good.”

Alongside the advantages of using social media as a news source, Smith said there are other disadvantages, such as the exchange of misinformation.

“I think as a society, we’ve kind of woken up to like, ‘Oh social media can be really not helpful in terms of spreading credible information’, and people have very low trust in the credible information that’s out there,” Smith said. “Then we have this introduction of the accusation of ‘fake news’ and all of the layers of that.”

Only 15% of surveyed Pepperdine students self-reported they always fact-check the news they see on social media.

Lang said she fact-checks every news story she sees on social platforms. She believes there is rarely malicious intent when users spread misinformation.

“I think that everyone who posts something truly cares about it and wants to raise awareness, and I think that’s awesome,” Lang said. “I think the problem with posting a snapshot of a huge event is that you just see so little of the actual event that’s happening in the news stories.”

To combat the spread of misinformation, Smith said she firmly believes in the importance of news literacy.

“President Trump was elected, and shortly after he was elected, we really started to see the term ‘fake news’ show up in our popular vernacular,” Smith said.

In spring of 2017, Smith and de los Santos held an event for Pepperdine alumni, journalists and stakeholders to sit on a panel to discuss the idea of “fake news.”

Employees of the Reagan Library attended the event as audience members and decided to hold a similar event at the library in May. Smith spoke as the keynote speaker and de los Santos sat on a panel of journalists.

“It was really interesting to hear directly from community members just how much vitriol they had toward the news,” Smith said.

After hearing the audience express a lack of trust in the media, Smith said she asked them where they got their news. She then discovered many of the people in the community consumed their news from social media.

Following the events, Smith and de los Santos began a study of news literacy in high school juniors and seniors. As part of the study, students would take a survey before and after participating in The Reagan Library’s situation room simulation, which assigns students to act as either presidential cabinet members or the press in a hypothetical breaking news event.

The study measures the students’ perception of the news and the impact of the experience in the Situation Room. Smith said the results of the study emphasize the importance in understanding the work of journalists and news media.