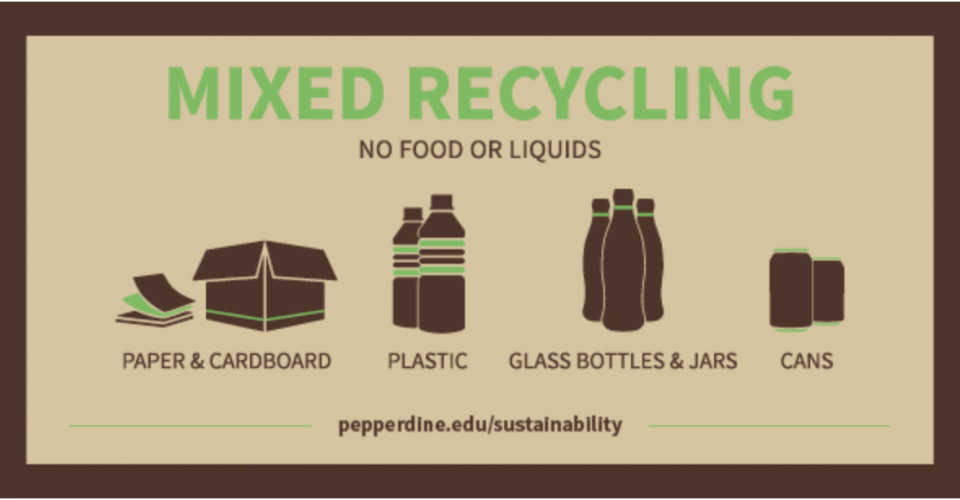 Going green has been a national trend in the wake of climate change, but how environmentally sustainable is Pepperdine?

Pepperdine’s recycling program introduced a new system in 2016 after its previous vendor, Crown Disposal, stopped its service in Malibu. Some on campus say the new system is not efficient enough to reach the statewide recycling goals, and the biggest issue Pepperdine faces is recycling education.

“Something that the Green Team is, working on in the next couple of months is how to recycle better,” Natalie Freeman, president of the Green Team, said. “A lot of us are optimistic recyclers, and that’s a huge problem at Pepperdine because there is a new system. It isn’t very effective, and we’re learning that more and more as time goes on.”

The new system, however, was not implemented entirely by choice.

The switch had to do with the National Sword, according to Carly Mischke, director of Facilities Services.

Crown disposal used a single-stream recycling method, which consists of both recycled material and trash material being disposed of in the same bags. This garbage is hauled by a vendor and sorted, and prior to 2018, put on a barge that would be sent to China and sorted.

Pepperdine’s new recycling program, contracted with Waste Management, uses a dual-stream recycling program. This means that both a recycling bag and a waste bag is used throughout campus now, and the responsibility to sort it is on the individual.

“It was like yeah, single stream doesn’t exist anymore because the money is not there,” Mischke said. “I think it’s harder overall. The burden’s back on us.” 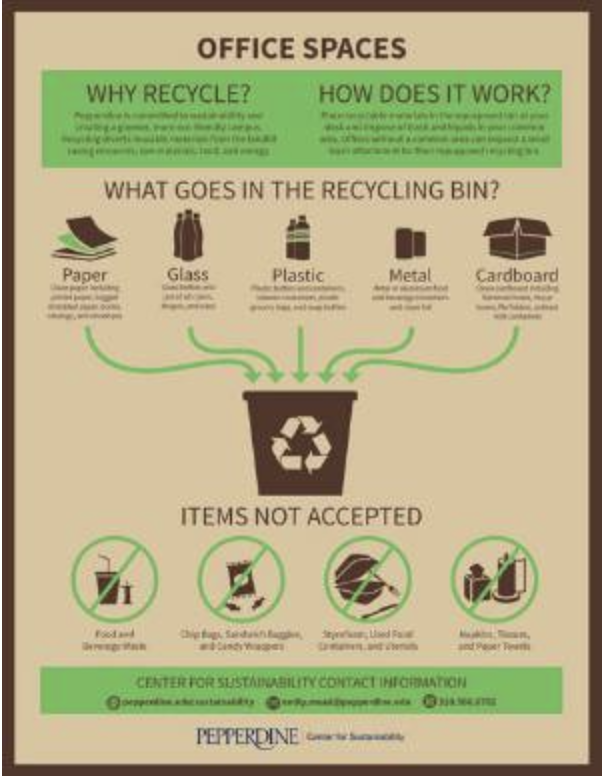 The impact of the change was immense, according to Mischke.

“And so we went from — and I say we in the very collective sense, California — a system where the hauler, who has all the infrastructure setup to source trash, has pushed that responsibility back to the generator, which is us,” Mischke said. “And we obviously don’t have the infrastructure built to do that. And so we’re having to figure that out along the way of how do we put that back into place, and then drive towards the state goal of 75 percent of diversion by 2025.”

California implemented an initiative in 2011 that set a goal that 75% of all trash would be diverted by 2025, according to CalRecycle.

“We’re in negotiations to see if we’re going to go with them permanently, or some others,” Doran said. “Because the state is saying that we need to have a diversion rate; we have to be able to recycle so much material in the longer term and Waste Management is not able to help us meet our goal.”

However, Pepperdine’s struggles did not only begin with the new system. Pepperdine’s partnership with Crown was not as effective as the data had said, according to Doran, who teaches courses about sustainability.

“The problem was, it looked like toward the end of our relationship with them, that they were fudging some of their numbers,” Doran said. “So yeah, it looked really impressive when we went out there. And just as we’re not sure if we were fooled, or if the county was fooled, or both of us were fooled. But they had some relationships with Pepperdine, because they were sending some of their kids here.”

A critical aspect of the new program is to know what is recyclable and what isn’t. 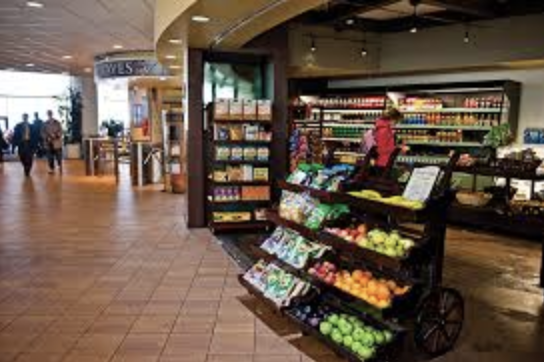 Camila Puppero, director of the Center for Sustainability, oversees the student education program.

“So we have a recycling consultant and they do trash audits,” Puppero said. “So they’ll look at certain spots of campus and certain times of the day and see what is getting thrown away properly or not.”

Knowing where items are more likely to be improperly recycled helps the sustainability center develop new methods for student education. One hotspot for improper recycling is the Starbucks in Payson.

“I think plastic waste obviously is such an important part of the public sphere at this point,” Freeman said. “I think Pepperdine certainly has a role to play in that, especially with the arrival of Starbucks.”

Close to 87% of students are buying at least one food or drink item from Starbucks a week, according to Doran. This, combined with Jamba Juice, has generated larger levels of waste.

Many students assume that Starbucks cups are recyclable, but Puppero confirms they are not.

“I think that a lot of the misses are not from a student or staff or a faculty member’s intention of wanting to do it wrong, but just not knowing,” Puppero said. “So for example, a Starbucks cup. You get your coffee, and then maybe you don’t necessarily know this is recyclable, because it looks like a plastic cup. So you might throw it in the recycling, but actually, the inner lining of the cup has wax and so you can’t recycle it. So it’s misinformation.”

Trash cans have a sticker on them that explains what to can be recycled and can’t be. However, experts confirm it hasn’t been very effective.

“I don’t know if it’s been as successful as it was hoped,” Mischke said.

Doran says there are better ways to educate Pepperdine on recycling.

“Part of the problem is that we don’t have a comprehensive education policy, the way that lots of other schools do, where every single person that goes through it goes through some kind of education,” Doran said. “And right now, we’re we’ve had 20 something years of this other way of doing it…but that now we’re in a situation where we’re now being asked to act like most other counties and cities around the world and we’re just behind the times. And it’s unclear to me at times where they’re covered.”

Pepperdine’s main efforts are geared toward correcting this information, Puppero said. She is currently launching a recycling education campaign partnered with the Green Team. The next phase of the campaign was hosting a booth on campus during Earth Day with samples of what can recycled and what can’t be.

“That was one booth in a day when on not even all the students are on campus on Wednesday,” Doran said of the booth. “So it’s going to take a lot more work than that.”

Puppero says the Sustainability center will focus on social media efforts next.

Recycling at other schools

Pepperdine’s lack of emphasis on sustainably managing its waste can best be understood in the context of other universities recycling programs.

Kikei Wong, zero waste coordinator at UCLA, discussed a common pledge many universities across the nation are undertaking in regard to cutting back on the amount of waste they produce.

“As for Zero Waste, the interim goal for the University of California was to achieve 75% waste diversion by 2012 and 90% diversion by 2020,” Wong said. 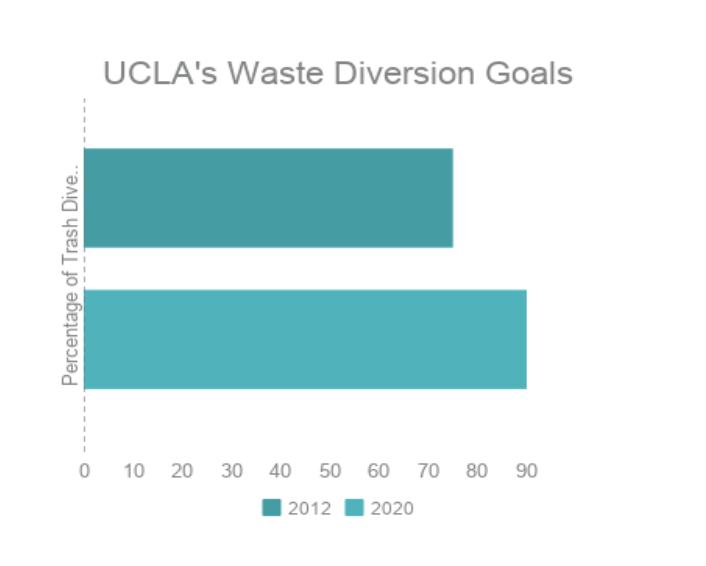 Pepperdine, however, has never openly discussed any intent of becoming a “Zero Waste” university.

In addition to UCLA’s “Zero Waste” initiative, on their Sustainable Practice Policies page, which outlines UCLA’s intentions in regard to all aspects of environmental preservation, they mention their plans to reduce and reuse expanded polystyrene (EPS).

EPS, as it is commonly referred to as, is a styrofoam like plastic that can be molded into many shapes including: coolers, lunch cases, etc. The use of EPS is incredibly harmful to the environment as they are non-recyclable and easily broken into many pieces.

“By 2020, [UCLA] will prohibit the sale, procurement or distribution of Expanded Polystyrene (EPS) other than that utilized for laboratory supply or medical packaging and products.” 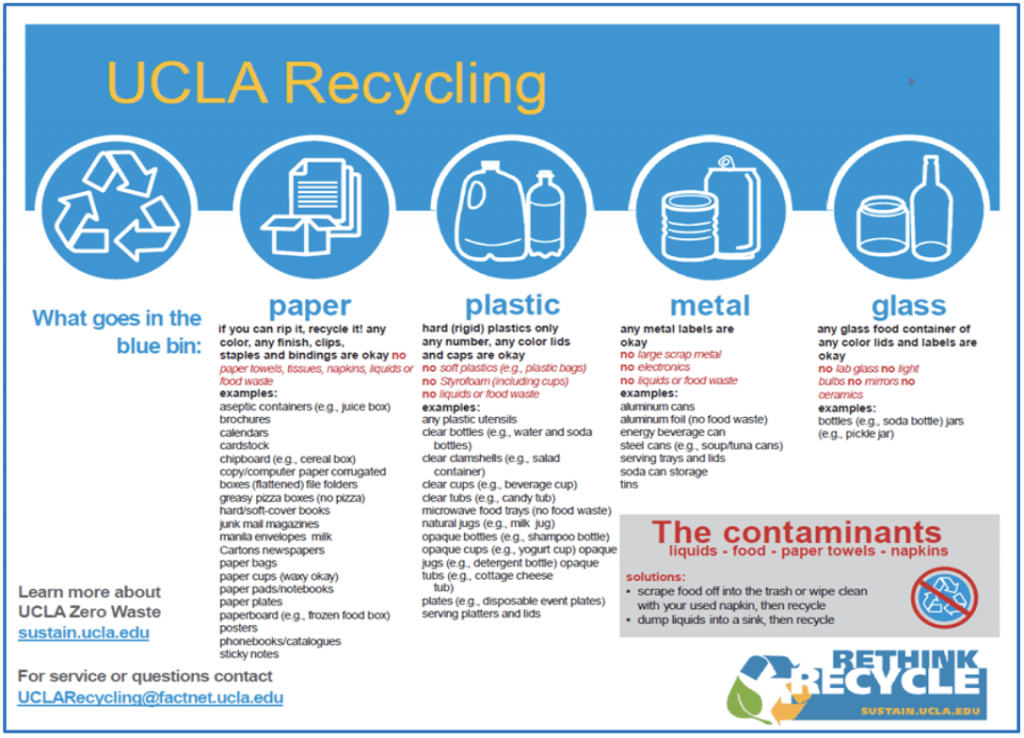 UCLA’s faculty are not the only ones stepping up for the betterment of sustainable waste; the student body has also made significant strides in improving the universities waste habits, Wong said.

“UCLA has many student programs and organizations that are involved in sustainability and recycling,” Wong said. “Last quarter, a student organization hosted Waste Awareness Week and collaborated with many of the (other) organizations to discuss the global waste crisis, environmental justice, fast fashion, individual solutions, and much more.”

UCLA’s student-run, environmentally friendly clubs don’t only collaborate with other student organizations but also work actively with faculty run organizations such as the Office of Sustainability. 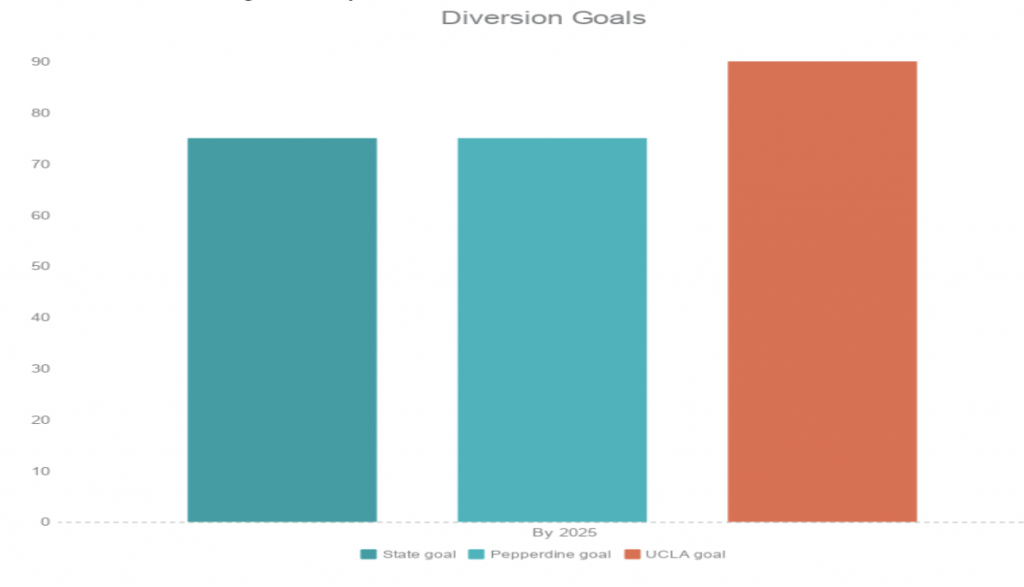 In addition to environmental clubs on UCLA’s campus, athletic teams are also attempting to make a change in their wastefulness.

“UCLA Athletics recently held a Zero Waste Basketball Game as part of the PAC12 Team Green program and is working with a Sustainability Action Research (SAR) Team as well as athletic organizations to create a more sustainable program.”

Beyond athletics, UCLA’s creativity in regard to how they manage and inform students about waste sustainability extends into a number of classes they offer on the subject.

“Various academic courses also offer students a chance to be involved in waste related courses and projects,” Wong said. “One course includes a waste audit lab, another course tasks students with creating waste awareness messages with art. There are also many other courses offered that touch on sustainability and recycling in the non-traditional sense, like food recovery.

UCLA has managed to incorporate sustainable waste methods into most areas of their campuses day to day operations.

“We did a major overhaul in how we collect waste from our offices from 2009-2012, we converted all the employee’s deskside bins,” Kalkbrenner said. “So rather than the custodian emptying their trash cans, we flipped it so employees receive a recycling bin that custodians empty and then inside it is a tiny little bucket for landfill waste and that’s up to the users to empty.”

Forcing faculty to be responsible for their own non-reusable waste not only sparks the discussion regarding the amount of waste they produce, but also helps to maintains a sense of mindfulness toward the products they are purchasing, and whether items are made of recyclable materials or not, according to Kalkbrenner.

Although there are no student run clubs on SCU’s campus that focus on sustainable recycling, the student body is still heavily involved in the advancement of the universities recycling efforts. The Center for Sustainability gathers a significant amount of data on topics such as the amount of food wastes students produce.

“Every quarter we do two lunch periods and two dinner periods where we ask students to scrape their wastes into a bin, only edible foods, and then we weigh that and calculate how many people go through the dining halls with food waste and without food waste.”

In addition to calculating their dining halls food waste, Kalkbrenner expressed that SCU also goes through all residence halls trash to gather information on how much waste is irresponsibly disposed of in the dorms. All food waste produced by the universities main campus is also recycled into feed for livestock.

Pepperdine, unfortunately, does not monitor food waste or any other types of wastes that are produced in dorms and the cafeteria on campus. SCU’s waste data collection does not stop at food waste either, as the university monitors an extensive amount of different facilities to get the best understanding of their current diversion rate that they can.

“We do waste characterizations, where we go through the landfill waste of any given building, and sort it out into 16 different categories. We then analyze how much trash should have been diverted,” Kalkbrenner stated. “We use the stats that we gather to inform us on how we need to collaborate with other departments so we can act on being more sustainable with our waste.”

This data is, in turn, used in the Center for Sustainability’s coordination efforts with other departments on campus, such as the Custodial sector, to figure out creative techniques in limiting the amount of food wastes on campus.

Correction: AB 341 set a statewide goal of 75% recycling, composting or reduction by 2020. This is not mandatory. This was a reporting error. 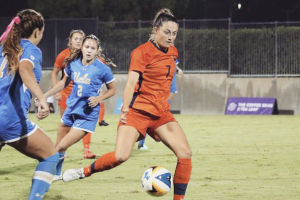