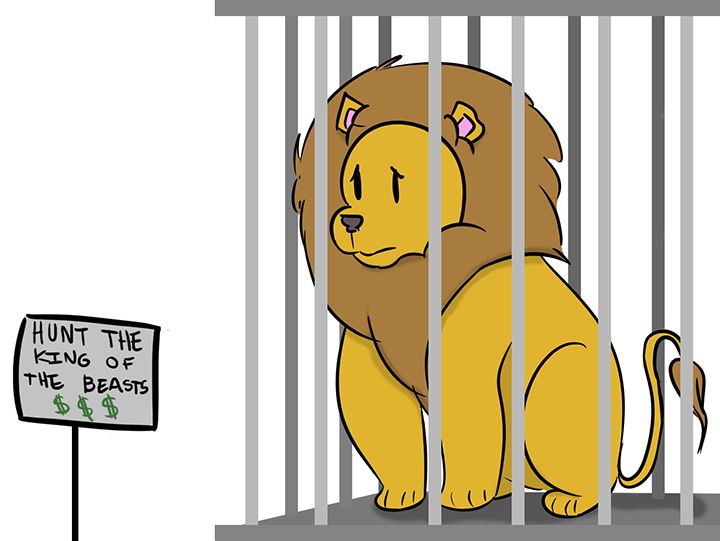 Just imagine: A man who raises lions, touches them, feeds them, sleeps beside them and even builds deep loving relationships with them. It seems like an unrealistic and extremely crazy dream to think that a human being would willingly risk his life only to care and help these carnivorous wild animals.

I was shocked when I found out that a man like this truly exists, and his name is Kevin Richardson, better known as the “Lion Whisperer.” Richardson is from South Africa and has shocked our world with his true passion for preserving, caring for and defending the scariest wild animals in our world.

This man has the coolest job on Earth in my opinion. As an animal lover myself, I love hearing his stories and seeing his videos and pictures with these beautiful yet life-threatening wild animals. He has raised numerous by himself, and he has come to love and grow attached to them just as much as they have to him. He has also gone beyond lions, giving hyenas nice massages under their chins and rubbing the black jaguars heads.

However, as I continued my research, I was even more shocked to find out the reason as to why this man is risking his life every single day for these wild animals and has been for over 16 years now.

Although the trade of wild animals and wildlife hunting exists in numerous parts of our world, it is important to note that in South Africa, cub-petting business and hunting are huge enterprises. In the article by Jacalyn Beales, “Canned hunting and cub-petting are big businesses in South Africa,” she writes how in the last 50 years alone, around 50 percent of Africa’s lions have disappeared entirely.

Beales said this is done specifically through a frightening and sickening legal industry called “canned hunting,” which is when tourists come to South Africa and kill lions that are held captive in a small enclosure. It doesn’t even count as true hunting, as the lion is already captive and has no chance of escape or of defending its own life against the hunters. Why would something so cruel and illogical exist? Because, as Beales explains, it brings in roughly $70 million each year.

What is even worse, however, is that the decrease of lions can also be explained through what Beales describes as the cub-petting industry. This industry takes baby cubs away from their mothers and thrusts them into tourists hands, who of course will pay anything for a picture with a baby lion. Sadly, these baby cubs are the exact same lions that are then put into the lion farms where tourists can practice canned hunting. This unending cycle, driven by money and cruelty, is what is really behind Richardson’s motivation to protect and risk his life for these animals.

What Richardson is doing is truly remarkable. I know Africa sounds far from us here at a safe, removed environment of Pepperdine, but in reality, what he is doing is helping all of us. After all, it is our wildlife and our world. If lions were to disappear, it would negatively affect all species, including humans. So what can we citizens, so physically far from this issue, really do?

There are two very simple answers to this. First, simply spread the word. Thousands are already aware of the increasingly popular Richardson, but very few actually know why he has such a great passion to protect these animals. It is important that we spread the word on the reality of the dark and criminal industries of cub-petting and canned hunting in South Africa, which most people are completely oblivious about. Advocating against wrongful industries is more powerful than most people think and it is necessary that we all know that we have a duty as global citizens to protect our Earth, including our wildlife.

The second thing we can do is be very aware of these practices when we see them, whether it be abroad or even here in the United States. It is important for us to not support these industries by being a passive bystander or by participating and paying for their cruel services. An example of this is to simply stand up for what you believe. When I went to Thailand this summer, I saw a man with a monkey on a chain and when he asked me to pay him to get a picture with the monkey, I strongly refused and told him that what he was doing was 100 percent wrong, and could be seen by the terrible and sad conditions in which the poor animal lived. He was shocked at my reaction and even left the area as other tourists heard what I had said and also decided to back off from the man’s suggestions.

If we begin to be more educated and truly consider ourselves citizens of this world, we must stand up and make a change. Thankfully, through people like Kevin Richardson, we have the hope of a new beginning. We have the hope to go back to how our world used to be, and how it should naturally be — with freedom and respect for all species, exactly the way God meant for it to be.