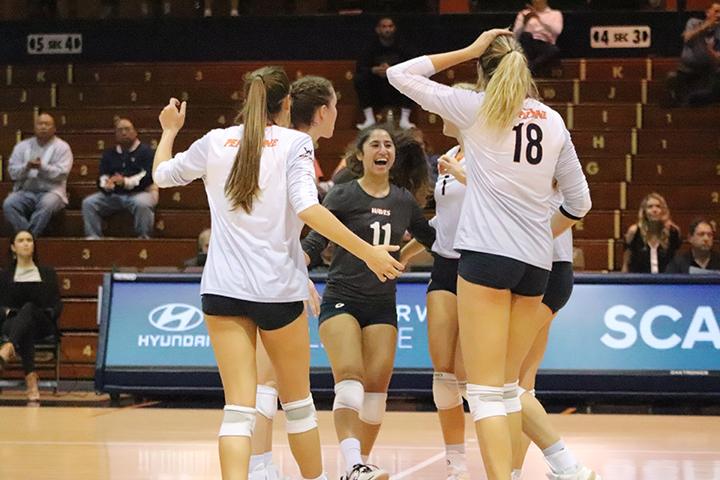 Members of the Pepperdine Women’s Volleyball team come together to celebrate a point during a 2019 match. The Waves have not been able to train together in person ahead of the potential upcoming spring season. File photo

While most college students use summer breaks as a chance to relax or pick up an internship, the work for student-athletes is just beginning.

During the COVID-19 pandemic, however, Pepperdine student-athletes were stuck at home during what would normally be one of the most active times of the year. Coaches and players had to revamp their usual offseason training programs and take on the challenge of how to connect as a team while adhering to both social distancing and NCAA regulations.

“It’s a huge loss not being able to compete and get things fine-tuned,” junior water polo player Sean Ferrari said. “Summer is such a pivotal time to get us ready for the season.”

Traditionally, players would use the summer period to physically, academically and socially prepare for the season ahead.

“We usually get to work out with [Strength and Conditioning Coach] Bri Holder, we get to have our girls in a couple classes and everything else is dictated by them,” Women’s Volleyball Head Coach Scott Wong said. “The biggest thing is they get to be with each other. They were looking forward to that a lot more than most this year.”

Pepperdine’s four sports performance coaches — including Holder, who also works with the women’s soccer and cross country and track programs — develop a strength and conditioning program for each team that helps athletes to both maintain their existing physical fitness and gear their body up to withstand the grind of a long season.

This year, however, the pandemic forced the closure of college campuses through the late spring and summer months. Many conferences — such as the West Coast Conference (WCC), which includes Pepperdine, have already announced the postponement of their fall sports seasons — meaning that fall athletes had to stay in shape from inside their own homes and without a specified start date to play.

Ferrari said Pepperdine sent each athlete a few workout supplies, such as bands, to be used in workouts. Strength coaches then put together packets that were individually tailored due to the disparity of resources that players may have access to.

Junior soccer player Trinity Watson credited Holder with being “on top of it” and organizing workouts to be flexible based on what players have.

“She gives a bunch of different variations for workouts,” Watson said. “So if you literally have nothing, it’s body weights and running, but if you have this [equipment], you can do this [exercise]. She’s really helpful with that.” 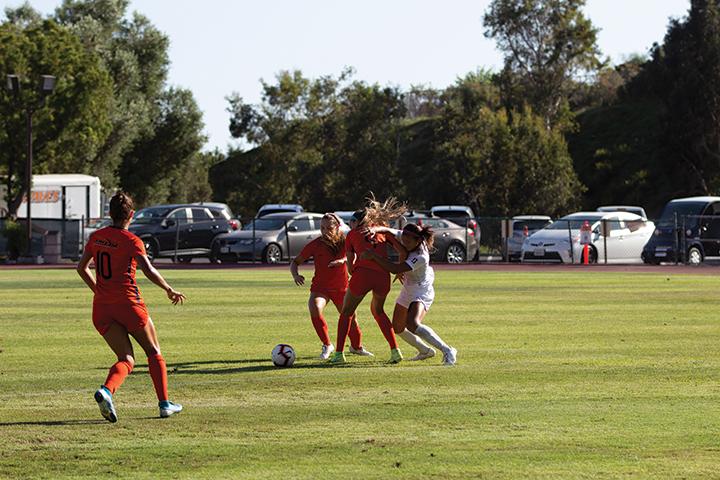 The Women's Soccer defense works to clear the ball during a 2019 match. This fall, the Waves have had to build team chemistry over Zoom meetings rather than on the field. File photo

While Ferrari and his teammates use the bands along with other DIY workout equipment, such as using water jugs instead of dumbbells, there is only so much of water polo that can be replicated.

“It’s not like basketball where you can go to any park and play,” Ferrari said. “The only guys who can work out are the people with pools in the backyard.”

The U.S. Water Polo Instagram account has posted workout videos that can be copied at home, and coaches “are understanding that people can’t be in the water,” Ferrari said. But while core exercises certainly don’t hurt, they don’t match the true workout of being in the pool.

“Human beings are not created to operate in the water,” Ferrari said. “It’ll take a little bit of time to reacclimate our hips and shoulders.”

That acclimatization period is a big reason why scrimmages, both intra-squad and against local schools, are the part of the summer Ferrari will miss most.

“It’s a big loss not being able to scrimmage and not getting in those reps,” Ferrari said. “We want to beat [other schools] in the summer and set that precedent for the fall — or the reverse, we want to take that hunger and carry it into the season.”

With the season postponed indefinitely, however, there is a cloud of uncertainty that players and coaches have to battle against.

“This time it’s a little harder because we obviously don’t have a date,” Watson said. “You just have to keep going, you know? There’s not really a goal, I guess, which makes things harder.”

Each program is fighting back in different ways. The women’s basketball program, led by Head Coach Kristen Dowling, came up with a slogan for this season — “Thrive in the Wait.”

Even if the team is unable to get on the basketball court as much as usual, they are thriving in other areas.

“We’ve done better in the classroom,” Dowling said. “We’re more focused because I think this whole thing has given us a new perspective and an attitude of gratefulness for what we have.”

Dowling said that as she looks back at the time of COVID-19, she hopes it will be a “turning point.”

Dowling’s vision echoes a concerted effort by Pepperdine coaches to transform a summer period that is traditionally focused on physical fitness into one that emphasizes connection and thoughtful discussion.

“For the past month, we’ve been talking about anything the girls want to bring to the table,” Wong said.

Wong broke his team up into groups and let them present a video they found on a subject of their choosing. Topics ranged widely from mental health to diversity and inclusion to joy, allowing the team to “stir up more conversation about experiences and how we can become more empathetic toward each other,” Wong said.

“It’s been awesome,” Wong said. “We can’t get as much strength and conditioning, so it’s been cool for our team to dive into some areas that we wouldn’t normally have the time to. That’s the silver lining for us.”

Several teams are also having a Zoom book club. The volleyball team read Brené Brown’s “Daring Greatly” — a book about finding strength through vulnerability. The soccer team read “Legacy” by James Kerr, who uses New Zealand’s famous All-Blacks rugby team as an example for lessons on leadership. The women’s basketball team read Joss Metcalf’s “Chop Wood, Carry Water,” a book about “how to fall in love with the process of becoming great.”

While Zoom has to be an integral part of team bonding in the era of COVID-19, athletes and coaches are still supportive of safe ways to connect for real.

“We’ve encouraged, when done in a safe way and whenever possible, to play, whether it’s six-on-six or two-on-two,” Wong said. “It’s just a good way to keep using their muscles and not forget how to play volleyball.”

Watson got much-needed “touches on the ball” by playing indoor pickup games at her local YMCA in the San Diego area, but she is now grateful to have moved into an off-campus Malibu apartment with a few of her teammates.

“Being here actually is really helpful,” Watson said. “Pretty much our whole team is here because a lot of us live off-campus; it’s just the freshmen who aren’t here. So we all work out together every day, and that helps a lot.” 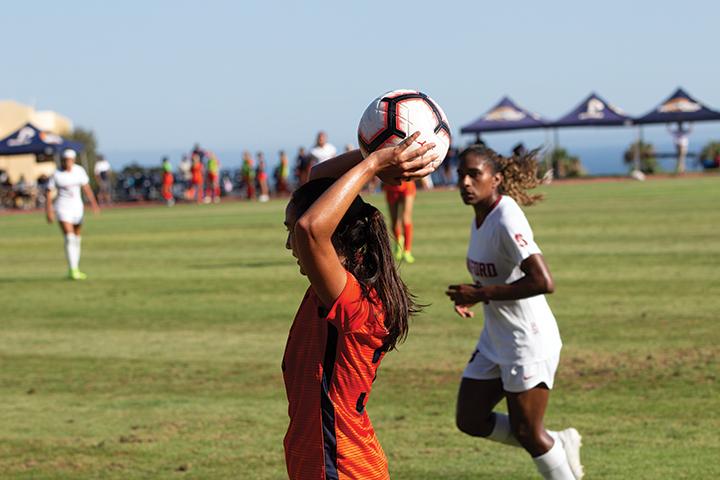 Defender Laura Ishikawa looks to find a teammate for a throw-in during a 2019 victory against eventual national champions Stanford. As of now, no timetable has been released for when the 2020 season will begin. File photo

Dowling said she looks forward to resuming events on campus and credited University leadership for establishing clear guidelines for how and when that can happen.

“Our athletic department has done a phenomenal job of putting together a return-to-play protocol,” Dowling said. “Before we can start ramping up basketball, we need to go through that, and we’ll adjust accordingly.”

Whenever college sports return, the season is guaranteed to be unpredictable.

“Everybody’s in the same boat, so it’s about who wants it most,” Ferrari said. “I know me and my guys are hungry. It’s an even playing field at this point.”

While every athlete hopes to put this offseason in the rearview mirror by returning to competition, this summer will leave a lasting mark on everybody involved.

“It was weird having to transition from normal life to masks, social distancing and isolation,” Watson said. “I took a summer class online for the first time, which was different. I couldn’t live in my apartment I was paying rent for, which was frustrating. And then not being able to train and having to figure out my situation with a gym or a field. It’s been a memorable time.”

In an Aug. 21 email to student-athletes, Athletic Director Steve Potts announced that student-athletes who have been granted exceptions to live on campus could begin to use Pepperdine athletic facilities starting Aug. 24. The campus remains closed to anyone living off-campus.

“When the Los Angeles County Department of Public Health (LACDPH) allows us to reopen the campus, those student-athletes residing off-campus will be allowed to return,” according to the email. “We are looking forward to that day with great anticipation.” 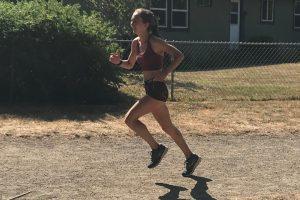 Junior cross country and track runner Key Pearson trains at home in Bainbridge Island, Wash. Pearson and many of her teammates...
Copyright 2013 Jupiter Premium Magazine Theme
Back to top