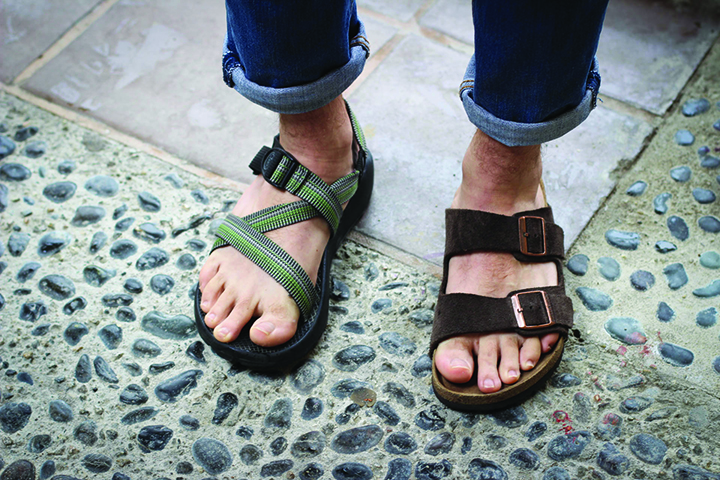 No matter what the weather is like or what is going on around campus, one can rest assure knowing that at all times of the year, many students on Pepperdine’s campus can be seen wearing Birkenstock or Chacos sandals.

A survey consisting of 122 participants, all Pepperdine undergrads, gives some insight into just how prominent these sandals really are and why students buy them.

Most notably, 75 percent of participants reported that they did not own Birkenstocks or Chacos before attending Pepperdine. However, 56 percent of participants also claimed to have purchased a pair, or both, of the sandals while they were here. This survey attempted to analyze why and when students purchase either pair of these sandals during their Pepperdine career.

“One of the first things I remember when I got to Pepperdine my freshman year was walking around and seeing Birks and Chacos and wondering if I missed some memo before getting here that said I was supposed to get a pair,” senior Desmond Herring said. “Now that I think of it, I remember I didn’t even know what those sandals were called until I asked someone I met during NSO, but since then I’ve always considered those the main sandals at Pepp.”

Of course, there are third party sandals that are also popular — Rainbows and Tevas to name a few — however, Birkenstocks and Chacos are the noticeably more prominent choice of sandals at Pepperdine. Nine percent of respondents considered themselves a part of this third party sandal group.

While it is common to see a student wearing a pair of Birkenstocks or Chacos, some students end up owning both during their time at Pepperdine.

“I chose Chacos for the functionality of an outdoor lifestyle with the comfort of not having my feet enclosed,” senior Joel Foster said. “I originally got Birks because I was in Germany and they were way cheaper — I got Chacos first, but I like my Birks better.”

In the survey, Birkenstocks led by a wide margin, with 31 percent of participants claiming to own a pair. 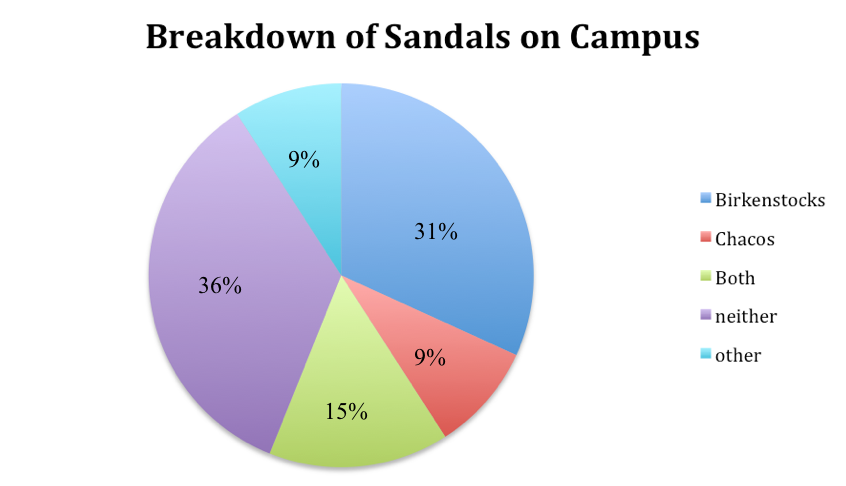 In terms of recreational activity, people tend to choose Chacos.

“I had Chacos before coming to Pepperdine because they were in style at home and I go to the lake a lot and they are great for that because you can get them wet and dirty,” senior Allie Berry said.

Students tended to buy Chacos for more specific purposes, rather than fashion, like Birkenstocks.

“I actually bought Chacos my junior year of high school because I saw them as a cool alternative to wear, especially when hiking and doing outdoor activities,” Duke Schilliaci, a sophomore studying abroad in Buenos Aires, said.

Some students have also felt that this ‘sandals sensation’ on campus is simply over-hyping a product.

“I do own both of those shoes, yet, not proudly,” senior Mele Weaver said. “Alas, here I am as a senior at Pepperdine, already having tasted the conformity of both those shoes, deciding to spend my last year avoiding Pepp trends and I, and my street-cred, couldn’t be happier.”

“Before going to Florence I did not own Birks or Chacos, but I was aware of each of those types of shoes, and expressed interest in buying them,” senior Nicholas Branch said. “I did buy Birks post-Florence because of my dad, a longtime advocate of Birks, and because a lot people around campus had them and that made me want them more too.”

This sense of urgency to get a pair of Birkenstocks or Chacos has an impact on students even while they are abroad as well.

“Well I have neither, but I have been pressured multiple times to buy them, and I feel like everyone just gets them because everyone gets them,” Gregory Camperos, a sophomore studying in Lausanne, said. “But I must say I am happy with or without them.”

Some students who did not study abroad their sophomore year have different perspectives.

“I didn’t want to be seen as a poser if I bought Chacos or Birks and didn’t go abroad to B.A. or Heidelberg,” John Sampson, senior and third party sandal supporter, said.

Some students do not sense this as much.

“I do not and have not felt pressure to buy Birkenstocks or Chacos since coming to Pepperdine,” Gus Schillaci, a senior who studied abroad in Shanghai, said.

Other students avoid the dilemma of whether to get Birkenstocks, Chacos or both altogether by opting out and buying other sandals.

“I was aware of all the Birks and Chacos on campus, a lot of my friends had them, but I ended up buying a pair of Rainbows one of the first weeks of school when some friends and I drove down to Huntington Beach,” senior Blake Somsen said. “I’ve never regretted my decision; I really like my Rainbows.”

The survey also noted that of the 56 percent of participants who claimed to have purchased Birkenstocks, Chacos or both after coming to Pepperdine, 28 percent of them made their purchase during their freshman year.

“I bought both Birkenstocks and Chacos within the first semester of my freshman year at Pepperdine,” senior Jenna Marceau said. “It wasn’t so much that I felt pressured by my friends who had them, but I genuinely thought they were really cool and comfy. I would have bought some before coming to Pepperdine, but I just didn’t know about them yet.”

Certain fraternities and sororities are often associated as groups with a high number of Birkenstocks and Chacos as well.

“I’d say about 60 percent of our chapter wears Birks, another 50 percent wear Chacos and 75 percent have at least one of the two,” Monica McGinty, a senior and member of the Pi Beta Phi Sorority, said. “If you see a girl walking around in Birks or Chacos, chances are she might be a Pi Phi.”

Many also associate the Alpha Tau Omega fraternity as a group where a good proportion of the overall members wear Birkenstocks or Chacos.

“I would say about 25 percent of our guys own a pair of Birkenstocks and about 35 percent own Chacos,” Daniel Perez, junior and member of ATO, said. “A lot of the guys wear Chacos because they hold up well in outdoor activities.”

The last thing the survey tried to analyze was participants’ main influence for purchasing a pair of Birkenstocks or Chacos. The survey showed that 51 percent of participants bought Birkenstocks or Chacos because they had friends who owned them, 15 percent pulled the trigger on the sandals because they saw a lot of them around campus, and 5 percent were influenced to purchase a pair of sandals due to the international program they were a part of, among other influences.

“I remember coming to Pepperdine and thinking Chacos were some of the weirdest sandals I had ever seen in my life, and now I own a pair,” senior Omar Sanchez said. “I also own a pair of Birks and I personally think it’s fun to see these sandals around all the time.”

It is unclear just how long Birkenstocks and Chacos have been at the top of the sandal food chain at Pepperdine.

“I remember seeing a bunch of Birks and Chacos when I was freshman at Pepperdine,” Paul Jetton, a Pepperdine alumnus from the graduating class of 2014. “I’m pretty sure it was like that long before I came, too.” 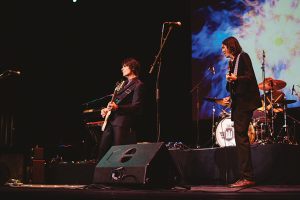