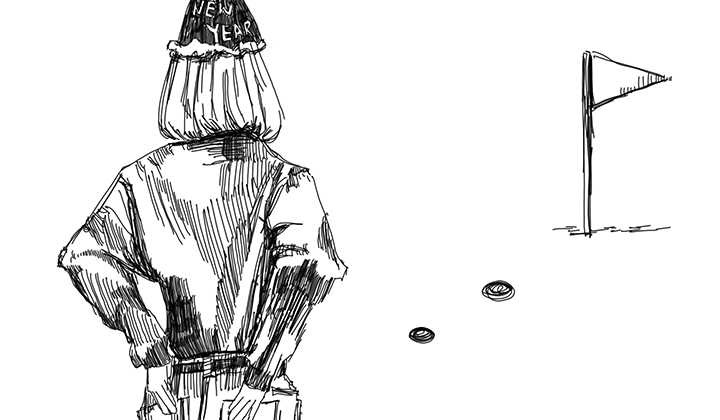 The New Year’s holiday has come and passed. One month into 2022 and the Pepperdine community resolutions are in full swing.

Whether career, academic or social-related, students have hopes to make a change in their lives. Looking back on January, students share their goals for the year and reflect on the strides taken so far to achieve them.

“I think resolutions are a great way and a fun way to set goals for ourselves,” sophomore Abe Wilson said.

Not everyone creates a new year’s resolution, but some students find them helpful to keep themselves on a better track.

Sophomore Julie Tingleff said she has academic-oriented goals for her year.

“My new year’s resolution is to be a better student,” Tingleff said.

As she starts her new classes for the semester, Tingleff said she hopes to better retain and understand information from them.

“I want to feel like I’m here at Pepperdine,” Tingleff said. “Not just for a degree but to learn. That’s been the idea behind the resolution.”

Wilson shared a similar sentiment of need for better academic success as well as a need for a healthier social life.

“My new year’s resolution is to have a better balance between a social life and my academic life,” Wilson said.

The aim is to be more stress-free around his friends and be more present with them, Wilson said.

Junior Brandon Kocz said he has three resolutions he intends to keep this year — give back to the people who really care about him, get in better shape and do the best work he can in his new job.

“I know that this year I want to be the best that I can be,” Kocz said.

Kocz, Tingleff and Wilson all said they are maintaining their resolutions and keeping on top of them.

“I feel like I’ve made great progress on my resolution,” Wilson said. “I have been able to get great grades while also spending quality time with my friends.”

To do this, Wilson said he created a place to write down and keep track of his schoolwork so he can prioritize that while also allotting free time for himself.

Since starting spring semester, Tingleff said she has been doing a better job with spending more time on her work, closely reading her materials, and taking independent time to study.

“It’s been really fulfilling so I don’t want to quit halfway through,” Tingleff said. “I really have been enjoying myself and feeling like a better not just a better student, but like a better person.”

As he works on all three of his resolutions, Kocz said he is at a different point with each of them. However, he said he is satisfied with the work he’s putting in.

“I am happy with this year so far. I’m taking it as seriously as I can and doing all I can to achieve my goals,” Kocz said.

The Importance of a Goal

Resolutions are heavily associated with New Year’s Day. Though, some said they think that waiting for the holiday to set resolutions is unnecessary.

“The idea of waiting for the new year to start a major change in your life, I don’t really agree with that,” said Kocz. “If November you know, you say ‘I want to do this next semester,’ like how about you do everything you can do then to achieve your goals?”

Tingleff said she believes that resolutions are only important if someone is committed to making them happen.

“If you just kind of make one for fun, or like without any real purpose behind it. It’s kind of pointless,” Tingleff said.

Wilson, who sets a resolution every year, said they make people more optimistic for the future.

“When we set goals, we imagine ourselves doing and being better people,” Wilson said.