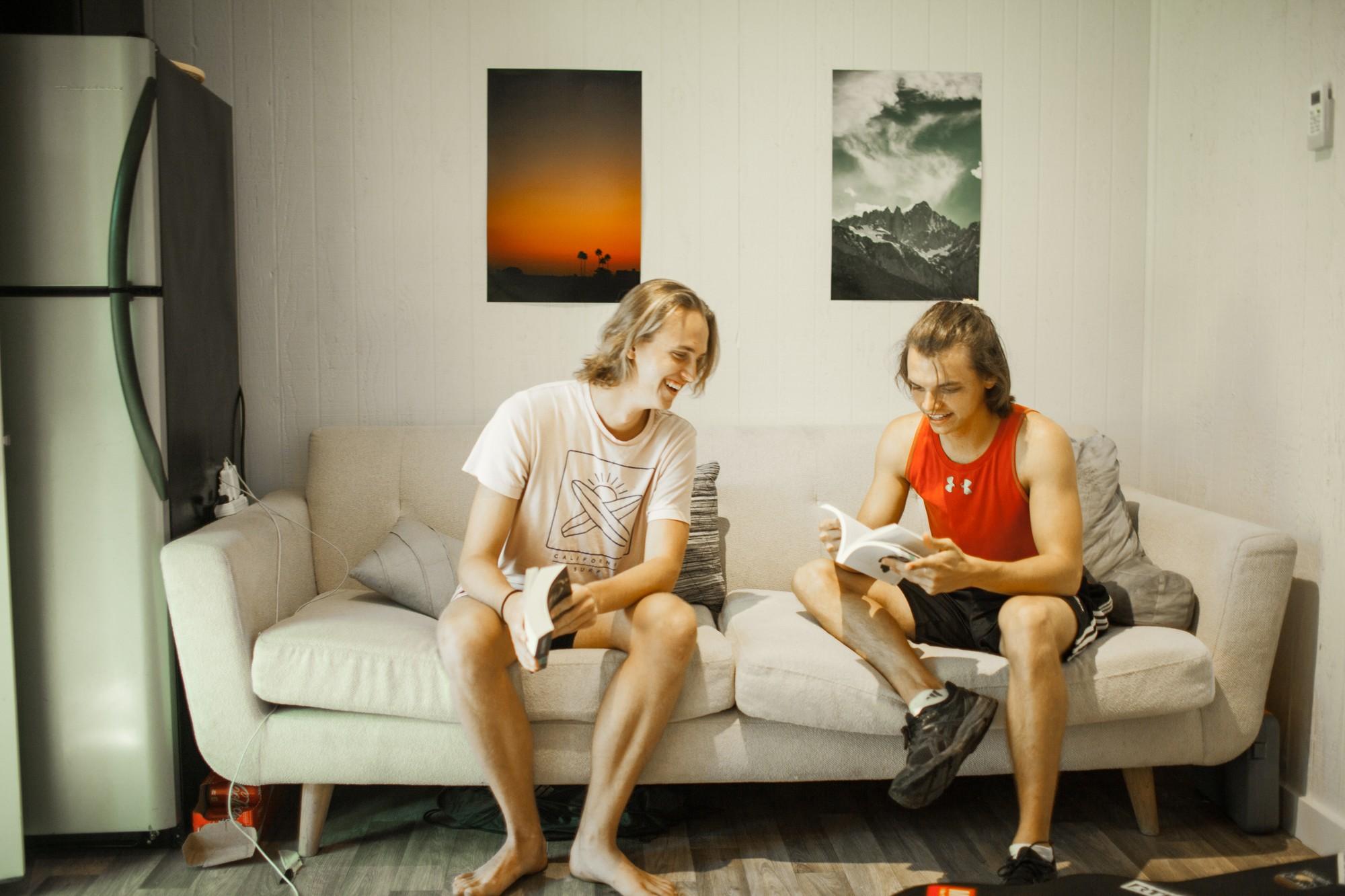 Sophomore Nick Barron, right, sits with his roommate Josh Sullivan at their apartment at Calamigos Ranch. Barron moved to Malibu to reconnect with friends and the Pepperdine community despite remote classes. Photo by Jaylene Ramli

Although the typically bustling Pepperdine campus remains closed for fall 2020, over 200 Pepperdine community members are still Zooming in Malibu and the surrounding area.

Students scrambled for off-campus housing following Pepperdine’s July 9 announcement detailing in-person plans for the semester, notifying upper-level students their housing contacts may be canceled and suspending all international programs for fall 2020. Pepperdine reversed plans July 22, announcing all classes would be remote and on-campus housing would be limited to only those with “a compelling hardship.” Despite these changes, dozens of students moved back to Malibu for various reasons.

“You try to replicate [the college experience] the best you can, but Zoom is Zoom,” sophomore Nick Barron said. “We’re working our hardest to keep ourselves motivated and to keep some sort of community going to make it feel something like college still.”

Senior Rachel Miner said she broke her on-campus housing contract prior to Pepperdine’s July 22 announcement due to uncertainty over whether the contract would be honored. She also worried that, even if it were honored, her roommate group may be broken up. Miner ended up moving into an apartment in Santa Monica with two of her original roommates.

Miner is one of at least 223 students living in the area, according to a recent Student Affairs survey with a response rate of 22%.

Junior Mikey Shahinian chose to live at the Malibu Canyon Apartments in Calabasas after Pepperdine canceled his on-campus housing contract. He said his desire to “get out of [his] house back home and see people again” largely influenced his decision.

Shahinian said moving back to the area has enabled him to reconnect with the community he formed last year in Buenos Aires because a number of students from the program also live in the Malibu Canyon Apartments.

Barron also moved to the area to try to regain a greater sense of community.

“I definitely did want to be out here rather than be home, especially after being home the entire quarantine,” Barron said. “I wanted to see and be around other Pepperdine students taking classes and stuff.”

Barron said he scrambled to find housing when the University canceled his semester in Buenos Aires and then again when new plans for on-campus housing fell apart due to Pepperdine’s announcement of solely online classes.

Barron now lives at Calamigos Ranch with five housemates from his first year, which he said “feels much closer to home than it would have been — home being Pepperdine.” He said living in the area has made Barron feel a much greater sense of Pepperdine community.

“The biggest thing that makes this feel much more like college are the people around me,” Barron said. “I’ve got five of the guys in my house all in my grade. We have classes, we’re doing stuff together and we know the struggle.”

Living in Malibu has also helped to establish a greater sense of normalcy, Barron said, as he and his friends can still drive past campus, shop at Ralph’s and go to the same beaches they frequented last year.

Senior Danielle Aro lives in the Avalon Apartments in Calabasas — her original plan for the academic year — but said “it definitely doesn’t feel like Pepperdine” without in-person classes and events. She likened the experience to her time studying in London.

“It’s like building a new community here like we did abroad,” Aro said. “I just miss running into people. It doesn’t feel lonely or isolating, but [the community] definitely doesn’t feel as flourishing.”

For Aro, it’s not a specific event or classroom on campus she said she misses most but spontaneous encounters with friends and acquaintances.

“I miss seeing Pepperdine people; I miss seeing the faculty in person,” Miner said. “We have such a good community, and there’s just so many happy, smiling faces everywhere. I miss everybody.”

“I’m really missing out on just that in-person connection with my professors and seeing other students with me — just the life that comes from that,” Barron said.