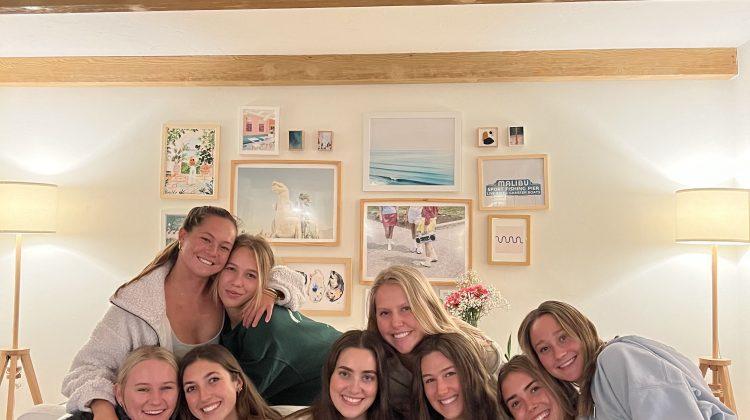 Members of Delta Gamma smile for a photo after their Bible study in March. Sophomore Alex Ianni said the studies usually consist of saying each others’ highs and lows of the week and then discussing a podcast or video together. Photo courtesy of Alex Ianni

Through Bible studies, community and prayer, students and Greek InterVarsity close the gap between faith and fraternity and sorority life.

Sarah Foy, Pepperdine’s campus staff minister for Greek IV, graduated from Pepperdine in 2018 as a member of Pi Beta Phi and has worked for Greek IV since. Greek IV is a Christian fellowship that offers resources and guidance about how to live as a Christian in Fraternity and Sorority Life. Each Greek chapter at Pepperdine has a “community group” that leads Bible studies under the guidance of Greek IV.

“Our whole mission is to bring Greek life and faith life together,” Foy said. “Our tagline or motto is ‘Every Greek; one friend away from knowing God.’”

Before Greek IV came to Pepperdine in fall 2017, Foy said she felt a disconnect between faith and Greek life on campus. Once she found out about Greek IV, Foy said she immediately joined them as a student leader and then as a staff member the next year.

“Our hope is that we can create spaces for Greeks to discover God,” Foy said. “We hope to create a safe space for people to ask questions, to maybe read the Bible for the first time, or to even just have vulnerable conversations with their fraternity brothers or sorority sisters.”

Since students in sororities and fraternities see each other weekly for chapters and already have formed connections, Foy said there is more opportunity for students to grow deeper in their faith.

Senior Ryan Smith is a member of Sigma Phi Epsilon and serves as their chapter minister through Greek IV. Smith said he hosts Bible studies at his house for chapter members to attend.

For the Bible studies, Smith said Greek IV provides a Bible verse and an outline to follow. He said the group reads and discusses what they find interesting about the provided verse.

“They [Bible studies] run about an hour to an hour and a half,” Ryan Smith said. “We’ll kind of just hang out a little bit and talk.”

While Greek IV is the main way Ryan Smith incorporates his faith into his fraternity, he said there are other opportunities for people to bring their faith and sorority or fraternity together.

“It doesn’t have to be necessarily through InterVarsity — you could maybe encourage your fraternity brothers or sorority sisters to just get together and talk and have a conversation about faith,” Ryan Smith said.

With the support of his brothers, Ryan Smith said being a part of a fraternity strengthened his relationship with God.

“I’ve had a big outlet of people to talk about my faith with rather than just my church group,” Ryan Smith said. “So it’s been able to be a broader group of people that I can open up these questions with.”

First-year Olivia Mastalerz and sophomore Madison Smith are members of Delta Delta Delta who lead a weekly Bible study for their sorority through Greek IV.

“We start off our Bible study with this thing called ‘Up, in and out’ that Madison came up with — it’s how you are up with God, and how you’re doing ‘in’ or internally and then how you are socially and in the outer area of your life,” Mastalerz said. “So we’ll start with that and then we’ll go through Scripture and kind of break down each section of the Scripture.”

Madison Smith said her goal is to provide an accessible and stress-free environment for all who want to come.

“We provide the actual scripture as part of our leader’s guide on paper so that you don’t need a Bible — you don’t need to bring anything with you other than yourself to come,” Madison Smith said. “And we just go through scripture, ask questions about it. And then we’ll do some sort of application to tie it back into our lives and then we close out in prayer.”

Sophomore Alex Ianni is a member of Delta Gamma and the sorority’s chaplain. Ianni said the previous DG chaplain inspired her to take the position.

“Since I was new to Pepperdine at the time,” Ianni said. “It [Bible studies] made me feel super welcomed and I just kind of wanted to continue that and if I can contribute something to DG and it can be something to spread the love of Jesus and include everyone, then why not take that opportunity?”

While Greek life is one way to grow in faith, Ianni said people can spread the word of God in any environment.

“Pepperdine is just set up so uniquely that we have the opportunity to verbally practice our faith,” Ianni said. “You can often hear the word Jesus wherever you are. It’s just so normal and I think that shouldn’t be taken advantage of.”