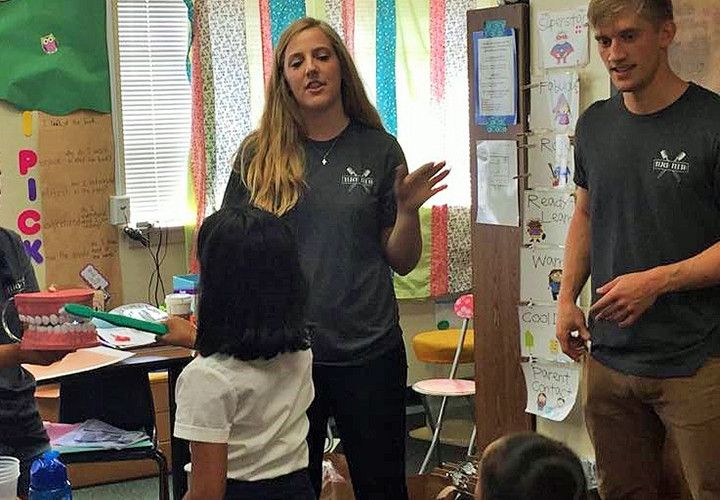 Pepperdine students met in Los Angeles to teach elementary and middle school students about oral hygiene this past Friday. They went from classroom to classroom at a small private Christian school equipped with large tooth models, hundreds of toothbrushes, different toothpastes and of course, smiles on their faces.

“Does anyone know how many teeth you have?” senior Ray McLagan asked a classroom of first-graders.

A new student-led program called Teach Teeth had its first audience this past week at Los Angeles Christian School in the West Adams district. A team of five students visited eight classrooms and educated over 130 students on proper oral hygiene and why it is important.

After the day was over, McLagan said he noticed a significant improvement in the children’s knowledge of dental health and hygiene.

“It was clear that a true knowledge gap existed regarding oral hygiene,” he said, “but the kids were incredibly receptive and excited to learn.”

McLagan first took interest in the oral health of Hispanic populations after he conducted research over the summer for a Spanish language class.

McLagan said something needed to be done.

He began to recruit students, asking if they would be interested in helping him tackle the issue. A couple months later, he had his team. The team consists of eight students, all from different grades and majors.

Lily Sorourifar, a junior double majoring in Spanish and Pre-Dental, wrote in an email that she joined the program because she saw the need among the Hispanic population. She was one of the four students who participated on Friday.

“I wanted to join Teach Teeth because it gives me an opportunity to help a needed population,” she wrote. “It was very rewarding to see the faces of young children light up as they learned about practical skills that are commonly overlooked.”

Part of Teach Teeth’s goal is to give the kids they educate the means to maintain good oral health on their own. In order to accomplish this, they needed hundreds of packets that included toothbrushes, tubes of toothpaste and spools of floss to hand out. The team is dependent on donations, so they made lists of local dentists to contact and got to work.

After a few phone calls, the team hit the jackpot. Junior Film and Pre-Dental double major Jeff Nordella was the one to break the news. He sent the team a text message and told them a dentist donated boxes of materials for free. Everyone gathered later that week to count the contents of the boxes. An hour later, they tallied everything up and found they had nearly 2,000 toothbrushes and tubes of toothpaste.

Hannah Patterson, Pre-PA and Psychology major, wrote in an email about how incredible it was to receive such support from dentists.

“The response from local dentists to help Teach Teeth has been absolutely incredible,” she said. “These supplies are crucial to facilitating Teach Teeth’s mission, because not only are we able to equip each student with knowledge, but we also are able to provide the tools to implement this knowledge into daily life.”

Two weeks after the donation, Teach Teeth went into their first classroom. According to an email from McLagan, he could not have done it without the help of his team.

“My team is unbelievable. The A-team includes: Mary Claire Span, Callaghan McDonough, Nina Khanna, Jeffrey Nordella, Lily Barbosa and Hannah Patterson. They have been crucial to the organization’s development, and there is no way it would be where it is today without them,” he wrote.

Jessica Froman, who teaches fifth grade at Los Angeles Christian School, said she enjoyed having the team come teach in her classroom.

“You should come back and do this again,” she said. “The kids loved it; it’s all they’ve been talking about.”

Editor’s note: The author of this story, Tanya Garcia, is a volunteer with the Teach Teeth program. 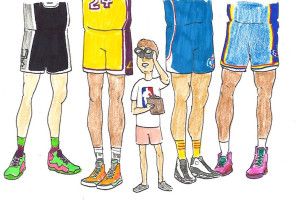