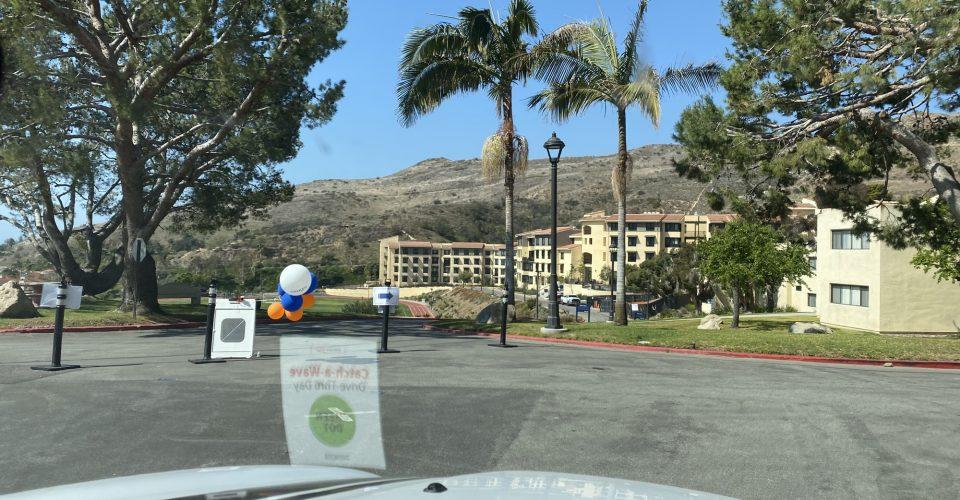 Admitted student Brooke Carter attended Pepperdine Drive-Thru Day on April 2, where she went on a 15-minute Drive-Thru tour of the Malibu Campus. The University offered Drive-Thru tours to out-of-state students, and those who participate are gifted a “swag bag,” which includes a link to an audio recording with information about campus. Photo Courtesy of Brooke Carter

The admitted students of Pepperdine’s Class of 2025 find connections with their peers as they prepare to make a decision that will affect the rest of their lives.

This year, Pepperdine Admissions approached college-decision season with a new angle: depending on the severity of LA county regulations, events would need to be either socially distanced or virtual. Finding the balance between effectiveness and safety has led to the Admissions office creating student panels and drive-thru tours.

“When admitted students and families interact with us virtually, we hope to communicate the Pepperdine experience as best as we can,” wrote Becca Bommarito, Admissions counselor and events coordinator for the Office of Admission in an April 23 email to the Graphic. “Pepperdine has such a vibrant and tight-knit community, so we’re trying to find the best ways to translate that through our virtual events.”

Ulysse Saltiel, an admitted student from Olympia, Wash., was one of the Malibu Reception attendees.

“One thing I want to see more of, is it was really cool, they had a student panel, I think it was at the Malibu reception, and just talking to current students was really helpful,” Saltiel said.

To further connect with current students Saltiel said he used social media such as Reddit and Instagram.

Rianna Smith, an admitted student from Fairhope, Ala., said she also attended a question and answer session with current Pepperdine students. Smith said she found the response of the Admissions Office special because many of her friends who went to different colleges did not get invited to receptions after colleges accepted them.

“At this time, we do not have details about in-person receptions,” Bommarito wrote. “We’re currently focusing our efforts on virtual events and minimal on-campus visitors.

Admissions gave admitted students very few opportunities to visit campus this year, one of which are the drive-thru tours. On April 2, Pepperdine hosted a Catch a Wave Drive-Thru day for in-state admitted students, Bommarito wrote. During this event, 217 students went on a 15-minute drive-thru tour of campus, and were given a “swag bag” with a QR code to an audio recording providing information.

Brooke Carter, an admitted student from Moorpark, Calif., went on a walking tour of campus in a group with three other in-state families. Carter said the walking tour gave her a much better idea of life at Pepperdine than the drive-thru tours.

Out-of-state students who self quarantine according to California Public Health Guidelines are able to go on driving tours of campus, Bommarito wrote.

“It’s kind of unfortunate that the actual tour couldn’t happen, that would have been great if I was able to walk around campus or get a guided tour that way,” Saltiel said. “But, you know, that is the best they could, so it was alright.”

Pepperdine is also offering virtual tours to students, Smith said she enjoyed these virtual tours because they allowed her to see campus in 3D. Several friends have sent her videos of drive-thru tours, and Smith hopes to visit campus soon.

Over the summer, the Pepperdine admissions counseling team will continue to set up virtual appointments, Bommarito wrote.

“Families and admitted students seem to understand the current situation and have been very flexible and accommodating to visitation restrictions,” Bommarito wrote.

Smith originally applied as a Religion major, however, she said she switched to International Business. Counselors at Pepperdine helped her make the switch, and Smith was able to talk to students within her major.

“I hope to talk more with counselors about that, and then, people who are actually in the program,” Smith said. “That would be nice to hear, to see what kind of careers people have pursued from their major so I hope that I get that over the summer, but also just connecting with people who are there and their experiences and what I have to look forward to.”

The housing portal, Smith said, opens May 15, and she had enough time to connect with other students through social media and make her decision on attending Pepperdine.

“I felt so good about it because I had so much time to figure things out and figure out when I had a roommate,” Smith said. “I applied Early Action to Pepperdine but then I got deferred to regular so that was good too because I had more time to meet people and that kind of thing, so it all kind of fell into place.”

Since he was an Early Action admit, Saltiel said he felt he had a sufficient amount of time to commit to Pepperdine. Saltiel was also able to change his major from Economics to International Business with the help of Pepperdine counselors.

Carter said the student-run Pepperdine 2025 Instagram placed admitted students into Snapchat groups together to encourage bonding. This group is where Carter found her roommate.

Carter said she did not feel rushed to commit to Pepperdine, and after being accepted and talking with a financial aid advisor, she felt comfortable with her decision.

“I was ready to jump in; I mean Pepperdine was my reach school,” Carter said. “So when I found out I got admitted I was like, ‘Oh my gosh.'”

While Carter has been able to interact with students, Carter said it had more to do with people reaching out over social media, rather than an admission event.

“I feel like if Admissions hosted events to allow students who are committed or deciding or whatever by May 15, I think that’d be a better way to like get to know even more people because it’s kind of limited to just the people in the group chats whereas it’d be cool to meet even more,” Carter said. 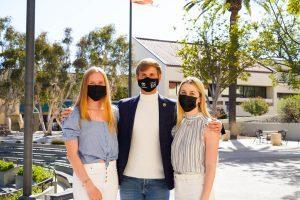